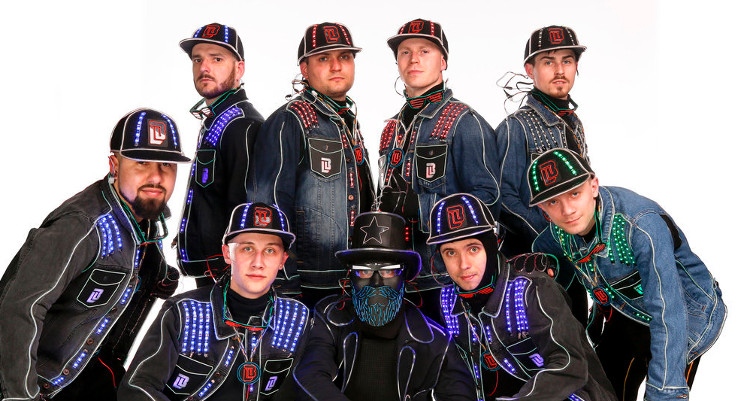 MIND-BLOWING (in caps) is the word to best describe the Light Balance dance group from AGT’s Tuesday night audition episode. The Ukrainian dance crew stunned the audience and the judges with their trippy, high-energy performance, and impressed AGT host, Tyra Banks so much that she pressed her Golden Buzzer for them! If you happened to have witnessed this group of talented dancers, then you probably want to know more about them! So, here are some facts about the Light Balance Dance Group that you should know.

America’s Got Talent isn’t the first global platform taken by the group, Light Balance. In 2014, the dance troupe had astounded the fans and judges on Simon Cowell’s Britain’s Got Talent with their majestic electronic performance.

The group is a formed of a bunch of talented dancers and computer programmers from Ukraine. Formed in 2012, the performers aren’t just professional dancers; they have day jobs to earn a living.

All the dancers are, reportedly, between the age 18 and 33, and are Ukrainian by birth. The group’s technical director’s name is Mykyta Sukhenko. In a pre-taped backstage interview, Sukhenko spoke of the troubles in Ukraine. He said, “Dance gave us a hope for a better life here in America…If we win this show, we will have an opportunity to change the lives of our families, and bring them to America.”

And that’s all it took to win the audience over emotionally. No, we aren’t saying that they aren’t talented, in fact, they are so talented and incredible that they are already running in the potential AGT season 12 winner category!

Now, about their AGT audition; Light Balance’s routine was mindbogglingly amazing! The entire AGT stage was turned into a black canvas. The act started with just the silhouette of one man blinking. He was decked out in an LED-lined Uncle Sam-inspired suit!

The music hit and thus began a psychedelic dance trip, with more dancers wearing lights on their faces and bodies joining the lead. They created beautiful visuals on the stage that took away every person’s breath in the audience! It was cleverly choreographed with tricky visuals and quick disappearances into the blackness; one minute they were there, the next they were gone, and it was visually stimulating on so many levels! You’ve really gotta witness it for yourself in order to grasp the marvel that was Light Balance, so be sure to check it out below!

The judges were stunned seeing the flawless performance. “We’ve seen dances in the dark before, but not this good,” judge Heidi Klum said as she showered them with praises after their audition.

Simon Cowell also had more than a few words to say in their praise! (Shocking, we know.) Cowell said, “I thought the act was incredible. It was imaginative. It was different. I’ve never seen anything like that before. It was incredible. Congratulations!”

Then, the show’s host, Tyra Banks took to the stage to extend more than a congratulation to the dancers. She used her Golden Buzzer to show her appreciation for them! While some AGT fans are doubting Banks’ decision, Tyra Banks stands by it. With Banks using her Golden Buzzer for them, the Light Balance dance group will directly reach the live rounds of America’s Got Talent Season 12.

I have never seen anything like @Light_Balance, and I truly believe they earned #GoldenBuzzer! Right?!?!

Meanwhile, the AGT family also showed their support and love for the Ukrainian dancers by mentioning them on their official Twitter page! According to the tweet, Light Balance is “One of the most mind-blowing performances in #AGT history!”

One of the most mind-blowing performances in #AGT history. This is @Light_Balance. #AGT pic.twitter.com/RqoXrerk2e