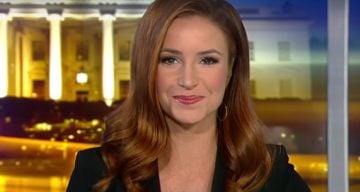 These days, when we talk about a Fox News reporter, we expect to hear something negative. But not with Kristin Fisher! The Washington correspondent is on a roll with the latest from the White House and even space!

Can we talk about Kristin Fisher for a moment? The Fox News correspondent is doing rather well, especially for being on a network where anchors have been embroiled in scandals lately. She reports from Washington and is now even reporting from Mar-a-Lago in Florida. Her new beat involves iguanas pooping on her, and poisonous caterpillars on her shoulder (cue internal screaming). So yeah, she’s a true professional! Here’s more about this amazing reporter in our Kristin Fisher wiki.

Fisher grew up in Houston, Texas, as well as overseas in London and Athens. During high school, she spent three months on an Alaskan glacier in the Chugach Mountains during National Outdoor Leadership School. She graduated with a bachelors in communication from Boston University, and has also summited Mount Rainier, Mount Shasta, and Mount Olympus.

She began her career as a contributor for KHOG-TV (ABC) in Arkansas, before moving to KJCT News 8 in the Colorado area. Fisher produced, filmed, edited, and hosted weekly Outdoor Adventure segments of the show, which was rated as the #1 weekend evening newscast. She briefly worked for Current TV, where she produced a documentary-style feature about the two presidential candidates with ties to Arkansas —Hillary Clinton and Mike Huckabee.

She worked with WUSA-TV (CBS) and ABC News in Washington before joining FNC as the Washington correspondent. When she moved to Washington DC, she covered the 2008 presidential campaigns and the inaugurations of President Obama. Fisher has also covered major breaking news stories such as Hurricanes Irene and Sandy, the shooting at the Washington Navy Yard, and she was a legislative correspondent for the Arkansas general assembly. In 2010, she won an Emmy Award for her segment on heroes in Washington.

Relax dude. And don't call me sweetheart. I've spent more than a decade reporting in the field & I love it… Iguana turds and all. https://t.co/SavIhlOfkG

She’s also the founder of Field Mouse Films and is the principal filmmaker. The boutique video production company was established in 2015, and specializes in making documentary-style films for corporate clients and news outlets. Some of its major clients include Starwood Hotels & Resorts and Uber. The 33-year-old’s net worth hasn’t been calculated yet, but it’s likely a hefty amount!

Other than reporting from the capital, this journalist also goes above and beyond —and by that we mean space! She covered seven space shuttle launches among her many space-related stories and was excited recently when President Trump continued the tradition of talking to astronauts in space.

I love you Grandma Tingle. Thank you for this life.

Where does her passion for the cosmos come from? It runs in the family! Her parents and her grandmother were actually astronauts. She mentions in her LinkedIn profile that she “failed to inherit the astronaut gene,” but inherited their desire to explore and explain it the world.

Her mother, Anna Lee Fisher is a chemist, emergency physician, and a former NASA astronaut. She is the mother of Kristin and Kara Fisher and was the first mother in space. During her career, she has been involved in three major NASA programs: The Space Shuttle, the International Space Station, and the Orion project. Anna Lee’s mother, Riley Tingle, was also an astronaut.

Also Read: Bill Nye Wiki: Everything You Need to Know about the Science Guy

Love this @nymag article about my Momma! "I delivered Kristin on a Friday. The following Monday I showed up for the weekly astronaut meeting. I felt like I was making a statement that yes, I had a baby, but I’m here and I’m going to do my job." #prouddaughter #goals

William Frederick Fisher, Kristin’s father, is a physician and former astronaut. His time in space coincided with Anna Fisher’s, who would go on to become his wife. He retired from NASA in the 1990s and opened a private medical practice.

The couple divorced sometime later. Anna Lee is now a management astronaut, involved in the design of the cockpit and displays of the space vehicle that will replace the shuttle at Johnson Space Center in Houston. Kristin’s father is a professor of emergency medicine at the University of Texas School of Medicine.

Fisher is married to Walker Forehand, director of Promontory Financial Group, a financial services consultancy in Washington. Forehand’s father was the chief judge of First Judicial Circuit of Virginia. The pair met at a study program in Athens in 2003. They parted ways after the summer program ended, but reunited in 2009.

Happy Birthday to the man who makes getting older feel so fulfilling and fun. I love growing up with you @walkerforehand ? (On the left, the saint of a woman who made him. In the middle, my adorable niece who stole the show at @sangerholzer's wedding this weekend in Alabama)

The day before Fisher turned 27, Forehand took her to the U.S. Botanical Garden, the gorgeous reporter’s favorite place in the city, making up a fake news assignment. Once there, he popped the question and she said yes!

They married in 2011 at the Church of the Holy City, with a reception at the Hay-Adams Hotel in Washington. Their wedding got some real estate in The New York Times and The Washington Post.