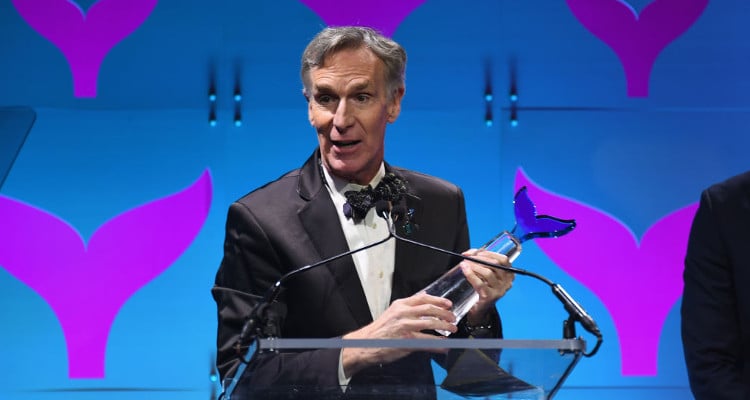 He brought science into mainstream culture and defined the childhood of many. Now, Bill Nye the Science Guy is using his fun science to spread awareness about global warming, among many other things.

Bill Nye is a hero of science. There’s no better way to learn about chemical reactions unless you’re watching Bill Nye the Science Guy! After years of making science fun for generations of children around the world, the Science Guy is making science political. He’s now talking about global warming, transgender rights, and the U.S. Constitution on various platforms. Curious about what this funny science expert is up to these days? Here’s what you need to know, right here in our Bill Nye wiki.

Who is Bill Nye?

Bill Nye had everyone hooked on science in the ‘90s thanks to his show, Bill Nye the Science Guy. Professionally, he’s a science educator, television presenter, and mechanical engineer. He applied for NASA several times, but was always rejected. Otherwise, we’d have to add astronaut to his professional titles, too!

Born in Washington D.C., his parents were World War II veterans. His mother, Jacqueline was a codebreaker and his father, Edwin Darby “Ned” Nye was a Japanese POW (Prisoner of War), whose experience without electricity led him to become a sundial enthusiast. Ned Nye built sundials out of fence posts and pebbles to stay sane, which is how Bill became interested in sundials himself.

Nye was accepted to the private Sidwell Friends School on a partial scholarship and graduated in 1973. He studied mechanical engineering at Cornell University and took an astronomy class taught by Carl Sagan there. He now occasionally gives guest lectures at Cornell on introductory-level astronomy and human ecology classes.

He was married to musician Blair Tindall after five months of engagement. Only seven weeks later, their marriage license was declared invalid and what ensued was a bitter court battle.

Consider the following: wear your love for science on your sleeve and support the Planetary Society’s work to advance space science and exploration with the "Science is Universal” shirt. Get yours at omaze.com/science or through the link in my bio. Carry on…

After graduating with a BS in mechanical engineering, Nye worked for the Boeing Corporation in Seattle. While there, he invented a hydraulic resonance suppressor tube used on 747 airplanes. He also got his comedic start when he won a Steve Martin look-alike contest and performed stand-up.

Engineer by day, comedian by night, Bill Nye submitted enough jokes to Seattle’s sketch comedy TV show, Almost Live to earn a living. He would do a segment of scientific demonstrations. In one famous incident, he corrected the show’s host, John Keister, on his pronunciation of the word “gigawatt,” Keister retorted, “Who do you think you are — Bill Nye the Science Guy?” And the stage name was born.

He created the show called Bill Nye the Science Guy, which ran on PBS for over 100 episodes in five seasons. It became one of the most-watched educational TV shows in the U.S. He brought together science and comedy in the iconic show. Now, no one can picture the 6’1’’ Science Guy without his signature blue lab coat and bowtie with impassioned catchphrases like, “It’s not magic. It’s Science!”

Listen up people(s) – the world’s climate is changing, and we need to do something about it. Purchase my limited edition @represent “It’s Not Magic, It’s Science!” crewneck & tee and you too, can make a difference. Help myself and The Solutions Project make clean energy more affordable and more accessible for all. Click link in bio to buy.

After the end of his timeless show, the 61-year-old moved on to other ventures. He has a few acting credits in various sci-fi movies and even worked with Ellen DeGeneres in Ellen’s Energy Adventure. He created Eyes for Nye following the guidelines of his previous show, but geared towards an older audience. He was in season 17 of Dancing with the Stars, but bowed out due to an injury. You probably also remember him from Big Bang Theory.

Over his long career, Bille Nye has a net worth of $6.5 million. He currently heads The Planetary Society, founded by his mentor and astronomical wiz, Carl Sagan. There’s also his own Netflix show, Bill Nye Saves the World.

Also Read: Bette Davis Wiki: Everything to Know about the Historic & Iconic Actress

When you're in love you want to tell the world… ❤️?

Nye’s Netflix show is a no-holds-barred version of all his science shows combined. He’s taking things to a political level now. He had My Crazy Ex-Girlfriend‘s Rachel Bloom on the show performing a song about being transgender, which got mixed reactions.

He also recently appeared on The Today Show to celebrate Earth Day (April 22), where he did his usual science-related performances. But it appears Kathie Lee Gifford was less than impressed. She was seen looking bored during his segment, which angered many viewers. A few even pointed out that she was rude throughout the interview, rolling her eyes, and making dramatic gestures while he answered her questions.

Nye’s to-do list also includes confronting the government on climate change. He went on CNN to talk about this much-debated environmental issue. However, he slammed the network for trying to boost their ratings by pitting the Science Guy against a climate change denier.

In other news, Bill Nye also participated in the March for Science in Washington D.C. on Earth Day. As much as the crowd went wild for the Science Guy, there were a few controversies, too. He even came under fire for misquoting the U.S. Constitution.