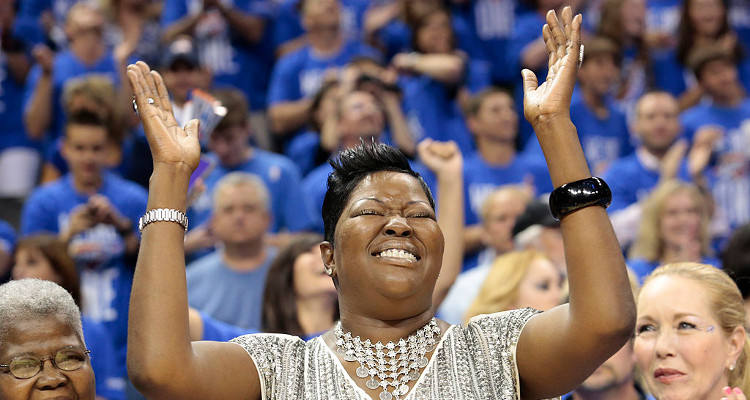 Basketball star Kevin Durant always thanks his mother for his success. After all, she raised him by herself and worked two jobs to provide for him and his brother! Wanda Pratt encouraged Durant to play basketball and guided him through difficult times. Today she is a motivational speaker and inspires other single mothers.

Whenever Kevin Durant speaks about his achievements, he never fails to thank his mother, Wanda Pratt. The Golden State Warriors star used to play for the Oklahoma City Thunder and Seattle Super Sonics. Who is Wanda Pratt? She Durant’s mother, who is known to basketball fans as “Mama Durant.” Here are some details from Wanda Pratt’s wiki.

Born on September 7, 1967 in Cleverly, Maryland, Wanda Pratt’s age 49, but she hardly looks it! When Durant was still a newborn, his father, Wayne Pratt, abandoned the family. Durant’s mother raised him and his brother single-handedly, with some help from his grandmother. Pratt worked over two decades for the federal government and provided for her children. She encouraged her son to practice hard and do his best. That is why basketball player always acknowledges his mother’s immense contribution to his success every chance he gets.

Also Read: Allen Iverson Net Worth: Is the NBA Hall of Famer Broke?

Finding Inspiration to Help Others

Pratt, who was only 21 when she was left with her two sons, was able to stay strong, knowing that God would show her the way. Today, she is a motivational speaker for her self-made organization, Momma Durant. She also helps run The Kevin Durant Family Foundation, through which she tries to help underprivileged families transition into permanent housing.

Putting Her Son on the Right Track

Out there with my son after an outstanding performance

While growing up, Durant thought of quitting basketball. His mother told him to be patient, and that he had to put his energy into a useful or meaningful activity. She said that if he were to quit basketball, he would have to wait until the end of the season to do so, and gave him a choice between playing the piano or playing basketball. Durant chose basketball. In fact, when he accepted the MVP award in 2014, Kevin Durant spoke about the great sacrifices Wanda Pratt made for him and the family. He said, “We wasn’t supposed to be here. You made us believe. You kept us off the street. You put clothes on our backs, food on the table. When you didn’t eat, you made sure we ate. You went to sleep hungry. You sacrificed for us. You the real MVP.”

Pratt worked two jobs to raise her family, even working night shifts as a postal worker. Durant says that he got his work ethic from his mother, and that is how he got into the NBA. After his acceptance speech, Lifetime released a movie, The Real MVP: The Wanda Durant Story, depicting the struggles and tribulations of Pratt as a single mother raising two children.

There is no information on Wanda Pratt’s net worth, but she is an established motivational speaker who is high in demand. Kevin Durant’s net worth is over $120.0 million, which means that money is no longer an option for him. Though there were many obstacles to overcome, Pratt did not give up and stayed strong for herself, and her sons.