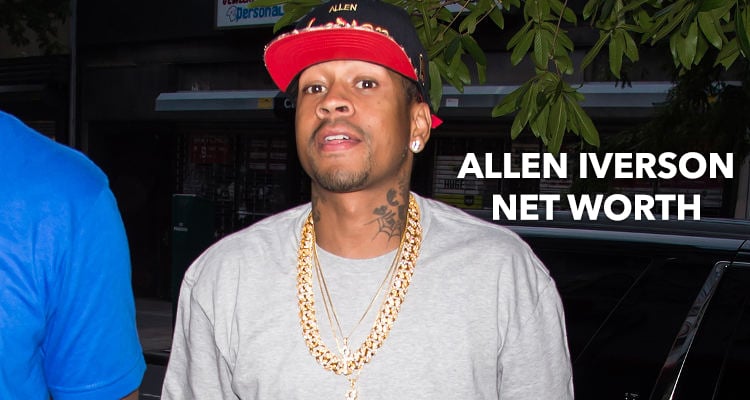 Former NBA star, Allen Iverson is famous for his moves on the court, but more for his off-court life. His financial troubles have kept him in the media spotlight for years. The latest figures estimate his net worth to be around $1 million, a far cry from what it once was.

Allen Iverson has had a stellar basketball career and made millions during his time in the league. But this Hall of Famer has lost more riches than he has earned. His controversies off the court include several arrests and even more legal issues that have landed him in financial troubles. As of 2017, his net worth is estimated to be around $1 million. Has his net worth since increased? Or is he close to going broke? Find out in Allen Iverson’s net worth article, right here.

Despite being one of the highest-paid athletes in the past, the latest figures value the 41-year-old’s net worth at a mere $1 million. During his 14-year long career, he earned millions from the league and endorsements, amassing a net worth of $30 million, despite his run-ins with the law. After retiring from the NBA, his net worth plummeted to a million. The good news is that it has been stable for a few years, implying that his bad boy days are a thing of the past.

Iverson is among the many revered players of the NBA, but his wealth is drastically less than most of his retired NBA peers. Let’s be real, there’s no NBA player whose net worth comes close to the legend himself, Michael Jordan and his billions. But retired players like Charles Barkley, Kobe Bryant, Scottie Pippen, and Shaquille O’Neal are much richer than Iverson, even though they’ve had their fair share of off-court controversies, too.

Though former Chicago Bulls player, Dennis Rodman won many titles, his net worth is also estimated to be around $1 million. Former NBA star, Antoine Walker’s gambling debts had reduced his net worth to $250,000. The following table illustrates Iverson’s net worth compared to other retired NBA players.

How Much was Iverson’s Salary in the NBA?

Nicknamed “The Answer,” Allen Iverson’s career earnings crossed $150 million in the 14 years he was in the league. When he started out in the NBA, his first contract with the Philadelphia 76ers earned him a salary of more than $2 million. As he proved his potential to be a basketball star, his value increased.

Iverson’s highest salary was $20 million, when he played one season with the Detroit Pistons. He played for the Memphis Grizzlies in the 2009-10 season, earning his lowest salary of $430,000. He returned to Philadelphia the next season and retired in 2013 with a $1 million salary. His total earnings amount to $154 million. So, where did all that money go?

The basketball star lost all of his NBA earnings in the blink of an eye. Post-retirement, he earns a monthly salary of $62,000 from his endorsement deals. When he turns 45 years old, he will be eligible for a monthly pension of $8,000 from the NBA. Here’s an illustration of his earnings when he played for the NBA.

Iverson’s Income Sources Outside the NBA

The former Sixer is one of the few athletes whose string of negative media hasn’t cost him any endorsement deals. Besides making more than $150 million in the NBA, Iverson signed lucrative endorsement deals with major brands. Since retiring, he’s been living off his sponsors.

In 2012, Iverson signed a lifetime endorsement deal with Reebok worth $50 million. From this deal, Reebok sold a line of shoes endorsed by (and named after) Iverson called “The Answer.” But it looks like his sponsors were afraid he’d blow all his money again, so Reebok has set up a trust fund for Iverson worth $32 million. The catch is, he only can gain access to it when he turns 55 years old! In the meantime, the company will pay him $800,000 a year.

When the 6-foot tall player was at the peak of his popularity, he also attempted to break into the rap scene. In the 2000 off-season, he recorded his debut rap album, but things didn’t go as planned. One of the tracks, “40 Bars” wasn’t released because of homophobic lyrics. He was told to change the lyrics, which he did, but the damage made by the controversy was done. The song was never released, it seemed that his rap career ended, before it even really began.

When he turns 45, Iverson will receive a pension from the NBA worth $1.4 million in monthly checks of $8,000. Until then, it doesn’t look like he’s out of options. The player reportedly got offers to play for other teams, but he turned down them claiming he has no desire to play anymore. As long as there are options, he might not be worse for wear.

A teenage Iverson had been sentenced to a correctional facility after a bowling alley brawl. When he was released, he spent three years at a school for at-risk students. While there, Georgetown University’s basketball coach, John Thompson, brought him on the court to see what he could do, and offered him a scholarship for the Georgetown Hoyas basketball team. After that, there was no stopping Iverson’s basketball career or legal and financial drama.

Also Read: Matt Ryan Net Worth: How Much is the Atlanta Falcons’ Quarterback Making?

Finances Hit from Trouble with the Law

Allen Iverson has been arrested and sentenced to community service for possession of marijuana and carrying a concealed weapon. He has also been arrested for public urination and blew much of his career earnings in gambling. In 2005, he got into a fight with a casino dealer at the Trump Taj Mahal.

In 2005, a man accused Iverson’s bodyguard of assault and sued Iverson –though he alleges that he didn’t lay a hand on the man. The jury ordered Iverson to pay $250,000 to the accuser. A similar occurrence happened in 2011 when another man sought $2.5 million in damages, claiming assault by Iverson’s bodyguard. But the case was dismissed due to lack of evidence.

What really made a dent on Iverson’s finances was the divorce from his now-ex-wife, Tawanna Turner. The couple were dating since high school and got married in 2001. They have two sons and three daughters together. But their marriage wasn’t exactly ideal. In 2002, Iverson allegedly threw his wife out of their house following a dispute, and later threatened two men with a gun when he couldn’t find her. The charges were later dropped due to contradictory statements from witnesses.

In 2011, Turner filed for divorce, seeking custody of their five children and demanding child and spousal support. This ensued a long and messy custody battle, during which he claimed to be broke. The couple have reportedly reconciled since, but their lengthy divorce battle reportedly took a chunk of his Reebok trust fund. Ouch!

Where Did All Those Millions Go?

Many believe that earning millions so soon changed the value of money for Allen Iverson. He became well-known for spending extravagantly, but he was also known for his enormous generosity. He reportedly spent millions of his NBA money and endorsement earnings on buying lavish gifts for his friends and his mother (especially), who raised him alone.

That’s not all! He maintained an entourage of 50 people everywhere he went. You can imagine how expensive an entourage that size can be! He also spent millions buying homes, cars, jewelry, and other luxuries, including expensive vacations. Iverson reportedly hated carrying luggage everywhere he went, so he bought new clothes on every trip he went on! With over 80 games every NBA season and spending most of his time on the road, that’s a lot of purchases every year!

While he earns $62,000 a month in endorsement residuals, his expenses amount to $360,000. A court filing in 2012 revealed that most of his expenses now go to paying back creditors. He also admitted to a judge that he spent $10,000 a month on clothes, restaurant/entertainment, and groceries. What does this guy eat? (Or wear, for that matter!)

He also reportedly owed $850,000 to a jewelry store in Georgia. A Georgia court ordered him to pay back what he owed to the store during which he seemingly claimed that he was bankrupt. Following his claim, the court ordered all his bank accounts and properties to be seized.

Broke or Not Broke? That is the Question…

During the heated divorce proceedings with his then-wife, Allen Iverson claimed he was too broke to even afford a cheeseburger. But in a 2015 interview on CBS This Morning, he said that the rumors of his bankruptcy were a “myth.” Sure, he’s seen better days, but Iverson has never been “broke.” In fact, a friend of his saved him from squandering what little money he has, thanks to the allowance from his Reebok deal.

After rumors of him being broke spread, Iverson’s accounts were seized by the court. He lost his many mansions to foreclosures. He owned a mansion worth $5 million in Philadelphia, which he put up for sale in 2007. It took two and a half years for the property to be sold at less than half its original price. It’s not known where Iverson currently lives or what happened to his fleet of cars. They probably would have come in handy right about now.