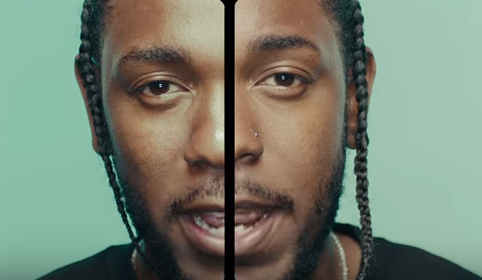 Kendrick Lamar’s new album track, “Humble” debuted at No. 1 on the Billboard Hot R&B/Hip-Hop Songs chart, and fans are excited to hear the rest of Kendrick Lamar’s songs. Lamar tweeted the new album name, Damn on Tuesday morning, along with the entire track list. If you want to learn more about the rap artist and his new album, check out our Kendrick Lamar wiki.

Early Life and Toughing It Out

Born in Compton, CA on June 17, 1987, Kendrick Lamar Duckworth was named in honor of American singer-songwriter, Eddie Kendricks of The Temptations. When he was eight years old he saw his music inspirations, Tupac Shakur and Dr. Dre film their “California Love” music video, which he considered one of the most significant moments in his life. In his childhood, he grew up living on welfare and section 8 housing, but it did not stop him from getting straight A’s at Centennial High School in Compton.

Kendrick Lamar’s age now is 29, and since 2004, he has been working in the rap music industry as a rapper and songwriter. Kendrick Lamar’s albums include the compilation album; untitled unmastered (2016), studio albums; Section.80 (2011), Good Kid, M.A.A.D City (2012), To Pimp a Butterfly (2015), and his latest album; Damn (2017). K-Dot aka Kendrick Lamar released the first songs off his first full-length mixtape called Youngest Head N***a in Charge (Hub City Threat: Minor of the Year) in 20014, when he was only 16. The project led to his contract with indie record label, Top Dawg Entertainment (TDE).

In 2010, his local recognition spread globally, thanks to his release of Overly Dedicated. He then released his first studio album, Section.80 in 2011, and by this time, his Internet following had grown exponentially. The social media craze with Lamar continued to grow, even though the reasons were occasionally negative. In August 2013, his verse on Big Sean’s “Control” vowing to lyrically “murder” every other up-and-coming rap artist, exploded his Twitter followers count by a 510% increase! The boy talks a big game!

During his career, he worked with several artists in the rap/hip-hop industry including The Game, Snoop Dogg, Busta Rhymes, Ab-Soul, Jay Rock, Ya Boy, Tech N9ne, RZA, J. Cole, Schoolboy Q, and more. Kendrick Lamar’s 2017 tour continues with performances at Coachella in California, U.S. on April 16 and 23, and Florida’s Bayfront Park on May 5. Check out the music video for his newest song “Humble,” which is already killin’ it on the music charts!

The track list to Lamar’s new album include the following songs. Check out his Twitter to see for yourself!

Kendrick Lamar’s height may be only 5’5”, but his net worth is sky high, at an estimated $18.5 million! If you’re wondering who Kendrick Lamar’s girlfriend is, the rapper is actually engaged to Whitney Alford. His fiancée was his high school sweetheart, and the two have stuck it out through thick and thin. Not their graduation, his blooming rap career, or their busy lifestyles could keep them apart. One of Kendrick Lamar’s quotes that touched hearts of his fans was when he referred to Alford as “my best friend,” to Billboard in April 2015. “I don’t even like the term that society has put in the word [my girl] as far as being a companion­–she’s somebody I can tell my fears to.” Other than a few moments shared, Lamar prefers to keep his personal life private. We can’t say we blame him!

To learn more about Kendrick Lamar’s net worth, check out our in-depth breakdown of the rapper’s earnings here.