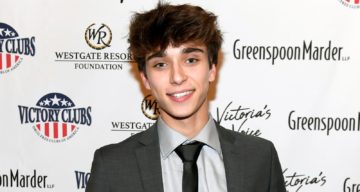 Josh Richards has the smarts, talent, and good looks to become one of the biggest TikTok stars of his generation. And thanks to his online fame, he has also become one of the highest-earning TikTok stars ever. Raking in all that cash through his influencer gigs has earned Josh Richards a net worth estimated at $1.5 million. And his graph is only going up as he makes smart career options.

Josh Richards was born on January 31, 2002 in Toronto, Canada and is the eldest of three children. He moved to the U.S. in 2020, as his TikTok career was on the rise.

Since he began posting on the platform in 2019, he has entertained his followers with dances, skits, and lip-sync videos, and he hopes to be a positive influence on fans. As of October 2020, his TikTok followers are over 23 million and growing.

In early 2020, he moved to the U.S. to co-found the Sway House, a collective of content creators on TikTok. His fellow Sway members include Jaden Hossler and Anthony Reeves.

But Richards and Hossler left the Sway House in June. Richards has since been distancing himself from the controversies the other Sway members got into this year.

His feud with another TikToker, Chase Hudson, however, only fueled his popularity. Four diss tracks Richards dropped on YouTube earned him an estimated $100,000 in YouTube ad revenue.

Leaving the Sway House has done nothing to dent his income. Thanks to sponsorship deals, Richards can earn anything between $13,000 and $22,000 per post.

His staggering income from TikTok earned him an estimated $1.5 million before he would turn 18. It landed him on the No. 5 spot of Forbes inaugural list of highest-earning TikTok stars.

This TikTok phenom shared his strategy to Forbes, stating, “It’s about creating companies or getting equity in companies.” He further added, “Influencers need to learn how to properly monetize.”

His traditional moneymaking on the short video-sharing site included sponsorships with House Party and Reebok.

His own merchandise line adds to his revenue as well.

Also Read: What Happened to Uncle Johnny from the “Elvis Duran Show”?

For example, he released a line of pants in his merch collection with the phrase “Still Softish,” as a reference to the popular diss track he dropped shading Chase Hudson. He reportedly sold thousands of the $45.00 pants and got an estimated cut of close to $500,000 from total merch sales.

Richards has tried to shed his image from TikTok’s bad boy to a smart entrepreneur. And that’s how, at only 18, he’s venturing into equity revenue streams.

Most notably, he is the cofounder of TalentX, a talent management startup made by and for other influencers. Furthermore, he is entering the beverage industry with his new drink brand, “Ani Energy.”

As TikTokers’ concerns about the potential ban on the app grew, they began moving on to other platforms. Richards is among the few who have shifted business to Triller, a smaller rival of TikTok.

He’s not only a content creator on Triller, but he joined the company’s C-suite for equity. He is now the company’s chief strategic officer and gets paid in equity.

Additionally, he has a secret startup in development with Sean Rad, the cofounder of Tinder. Together with fellow Sway House stars Bryce Hall and Griffin Johnson, he is one of the angel investors in the startup, Lendtable.

Richards is expanding his talents into yet more income sources. That includes signing a deal with Warner Records. He also has acting credits in Summertime Dropouts and the upcoming Laurence Fishburne-starrer, Brother’s Keeper. In recent history, he has earned a podcast spot on Barstool Sports.