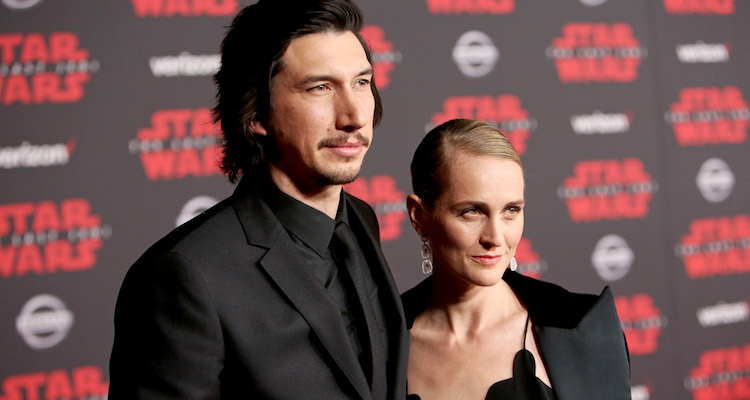 The moment you’ve all been waiting for is finally here: Star Wars: The Last Jedi is in theaters today! Fans all over have been waiting for this moment and it’s no surprise that many of them are getting all the info they can on the film’s villain, Kylo Ren, played by Adam Driver, 34. But who’s Adam Driver’s wife? If you want to learn more about her, then you need to read our Joanne Tucker wiki.

Who is Joanne Tucker?

The New York City native is a young, blonde actress but not a well-known one like Blake Lively, for example. This means that Joanne Tucker’s age is hard to determine, as well as her upbringing. But Joanne Tucker’s pics are online, usually accompanied by her husband. She’s probably best known for playing Valerie in the 2012 film Gayby, alongside Matt Wilkas, the boyfriend of Olympic pro-skier Gus Kenworthy. She’s also acted in Listen Up Philip (2014), Loft (2011), and HBO’s Girls (2016).

Star couple Adam Driver and Joanne Tucker met while at Juilliard and tied the knot after a few years of dating. They said “I do” at a destination wedding over the weekend of June 22, 2013, where Girls star Lena Dunham was a guest.

“They are very sweet together,” a source told UsWeekly of the actor and Tucker. “They’ve been dating forever, years, and live together; [they’re] very comfortable and in love. She was with him before the Girls fame.”

Another source added: “They both love theater and the arts. She respects him so much…Everyone on the show is very happy for them.”

As for Joanne Tucker’s kids, the couple doesn’t children have any at the moment but plan to eventually have a family.

She Taught Him about Gouda Cheese

In an interview with Broadway.com, Driver said that his wife taught him many things and shaped who he is saying, “She taught me what Gouda cheese is and that you shouldn’t talk with your mouth full and spit on the sidewalk.”

She also taught him how to be a bit more fashionable than he normally was before.

“I’m not fashionable,” Driver said in a Rolling Stone interview. “I just kept dressing like a 15-year-old until my wife was basically like, ‘You know, you should wear long pants now. Maybe shorts are good for some people, but not you. And maybe you should get your toe looked at, ’cause, you know, it looks like a turtle shell.'”

(Well, if your own wife can’t tell you, then who can?)

Driver Can’t Watch His Own Acting

While everyone can’t wait to see the latest installment of the Star Wars franchise, Driver doesn’t share the same amount of excitement!

“For a month leading up to it, I was like, ‘I don’t know if I can watch this,'” he said to Esquire. “Thankfully I’m masked through a lot of it, so I could kind of hide that way. But it took a long time. I remember being sick to my stomach and almost vomiting in the theater at the premiere which was just… very disconcerting, really.”