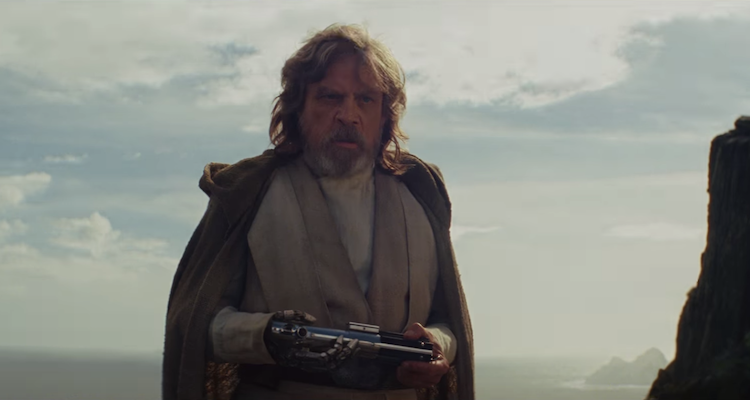 What happens to Luke Skywalker in The Last Jedi? It’s a question that fans have been asking since he was seen in Jedi robes at the end of The Force Awakens two years ago. The Last Jedi covers the disappearance of Luke Skywalker in the first place, but it also gives us a brand new question: Did Luke Skywalker die? We are going to discuss one of the key points surrounding The Last Jedi, so if you haven’t seen the movie yet, this is your spoiler warning! Bookmark this page, see the movie (multiple views are always a good idea), and then come back, because to borrow a line from Skywalker, this isn’t going to go the way you think.

Why is Luke Skywalker living by himself in the middle of nowhere and not helping The Resistance? And, why isn’t he hacking down the First Order with a lightsaber to become a point of light for the good guys?

To put it simply, Skywalker screwed up and felt that he had to pay for his mistakes. So, he put himself in a place where he wouldn’t make any more of them.

As explained in The Force Awakens, Luke was teaching a new group of Jedi. And one of them, Kylo Ren, went bad.

In The Last Jedi, we see how bad things got and why Skywalker went into exile. The death of his students and his nephew flipping to the dark side has damaged Skywalker. He’s not broken, but he’s pretty close.

Not wanting to inflict that pain on himself or anyone else again, Skywalker left and went as far as he could away from anyone. But when Rey shows up, it threatens that status quo.

What Happens to Luke Skywalker at the End of The Last Jedi?

Star Wars: The Last Jedi is a film that is both very familiar in the Star Wars universe but also very different. In many ways, it gives you a lot of moments that you expect but not how you would expect them to get there.

In 15 hours we will premiere The Last Jedi!? We are very lucky and can't wait to watch it! Will you experience yhe I-Max! No spoil of course! D-1 France, Europe, New Zealand, Australia! D-2/3 Usa and rest of the world! Exclusive news The Last Jedi will be premiere tonight in England, London! Who's from England here? Tag us and comment! #thelastjedi #starwars

Probably the biggest of these moments is Luke Skywalker’s death. It’s not surprising that Skywalker dies in this installment, as The Force Awakens pretty much points to it. The new films are clearing the decks of the original main characters, especially after the real-life death of Carrie Fisher.

Han Solo is gone, and we know that Princess Leia has to be gone. So, it’s not too surprising that Skywalker is taken away as well.

Brother and sister.? Friends for ever. Mark & Carrie Much love to you Carrie and Mark. #legends #theskywalkers #thelastjedi #starwars

At the end of the movie, we see Luke Skywalker confront Kylo Ren to save the day. But as it turns out, Skywalker isn’t even there. He’s using The Force to project himself across the galaxy!

Why he didn’t just saddle up, get in his X-wing, and show up in person is a different question. But he does appear, and the strain of the projection ultimately consumes Luke back into The Force.

Skywalker’s body disappears much like Obi-Wan and Yoda. But does this mean the end of Luke Skywalker? Not necessarily.

Remember, Obi-Wan died in A New Hope but made appearances in The Empire Strikes Back and Return of the Jedi as a Force Ghost. So, don’t be surprised to see Luke Skywalker in a different form in the next film.