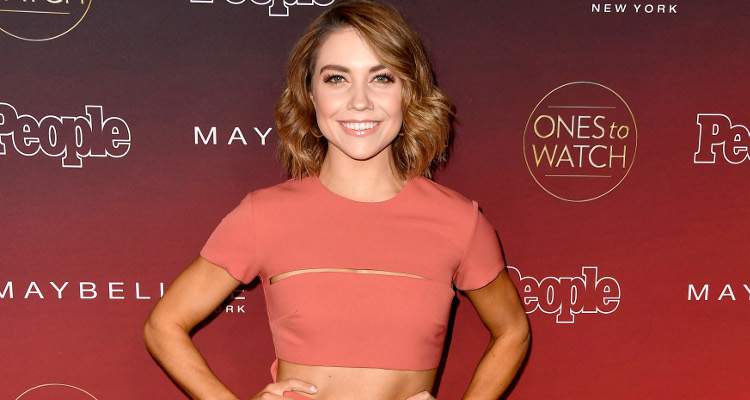 On yesterday’s episode of Dancing with the Stars, dance couple Victoria Arlen and Valentin Chmerkovskiy were eliminated. However, Chmerkovskiy got the opportunity to shake a move or two with fellow dancer and girlfriend, Jenna Johnson. Keep reading to know more about Val Chmerkovskiy’s girlfriend in our Jenna Johnson wiki.

The day is fast approaching when one of the dancing pairs on Dancing with the Stars will become the winner of the competition, taking home the Mirrorball Trophy and prize money. On yesterday’s episode of DWTS, talented dancer Val Chmerkovskiy and his partner, Victoria Arlen, were sent home. For their performance, Chmerkovskiy and Arlen performed with Jenna Johnson in a contemporary routine to “To Build a Home” by The Cinematic Orchestra.

Chmerkovskiy was really happy that Johnson danced with them and ensured that she got credit.

Chmerkovskiy said, “I would love to take a second and thank Jenna Johnson for not just bringing this dance to life as a dancer, but as a choreographer, it would not happen without her.”

Born Jenna Michelle Johnson on April 12, 1994, Jenna Johnson’s age is 23. She was born in Provo, Utah, to Tamara Jean and Curt Johnson.

A night in Paris ?

From a very young age, Johnson was interested in dancing. So, at the young age of three, her parents enrolled her in classes so that she could learn various dance forms, including contemporary, hip-hop, ballroom, jazz, and ballet.

Besides concentrating on dance, Johnson also focused on her education. She attended Timpview High School and graduated in 2012.

As of now, there is no information about Jenna Johnson’s net worth.

Jenna Johnson on So You Think You Can Dance

Johnson’s interest in dancing made her a contestant on season 10 of So You Think You Can Dance. It looks like dance runs in Jenna Johnson’s family because before she auditioned for SYTYCD, her two older sisters also auditioned but reportedly could not make it on the show.

During her stint on the show, Johnson specialized in Latin ballroom dance and her dance partner was contemporary dancer, Tucker Knox. Undoubtedly, Johnson is a brilliant dancer, as she and her partner made it to the top eight. But, unfortunately, both Johnson and Knox were eliminated from the show on August 20, 2013.

However, three years later, Johnson made a comeback on So You Think You Can Dance: The Next Generation in 2016. Johnson was one of the choreographers and a mentor on the show. She competed on the show alongside Jake Monreal and again made it to the top eight before getting eliminated on August 1, 2016.

Johnson was back again on the show in season 14 as an All-Star. She mentored Kiki Nyemchek and made it to the top four.

Jenna Johnson On Dancing with the Stars

Her love for dancing took her to Dancing with the Stars. From season 18 to season 22, Johnson was one of the troupe members on the show. Johnson’s hard work finally paid off when in August 2016, it was revealed that she would be a professional dancer on the show from season 23 onward.

On season 23, Johnson returned to the show as a professional dancer and her dance partner was actor Jake T. Austin. Johnson and Austin did the cha-cha and jive, but unfortunately, they were the first dance couple to be sent home on September 20, 2016.

How I woke up feeling this morning… one year older and wiser too ?

After his elimination, Austin was obviously upset and said, “I didn’t expect this at all, just preparing for the worst, hoping for the best. But this happens and I’m just really lucky that I got this opportunity and I’ll never forget it. Just working with someone like Jenna [Johnson] is unforgettable.”

In season 25 of Dancing with the Stars, Johnson returned to the show once again as a troupe member. So, she was around when her boyfriend, Val Chmerkovskiy, was shaking his legs with his dance partner, Victoria Arlen.

Everybody has to go through some struggle to achieve their goals in life. Likewise, even Johnson has had her share of ups and downs to become a great dancer.

My tip for the day, brought to you by @Neutrogena! I travel a lot and my skin goes through it, prob a little too much! :/ One of my go to remedies for keeping my skin hydrated is the Neutrogena Hydro Boost Hydrating Serum! The serum ups my skin’s hydration and replenishes water back into it, which gives me smooth, supple skin for days! Apply after you cleanse your face…it's amazing! 🙂 “#GetthatBounceBack #hydroboost #Brand_Partner

Johnson has shared her story on her website, with the prime motive to inspire people. Her website also covers other aspects such as fitness, well-being, nutrition, lifestyle, and even beauty.

The 23-year-old dancer is in a relationship with fellow professional dancer, Val Chmerkovskiy. The duo met in 2015 during his dance show, Sway.

Last night with my ?

For almost two years, the pair has been in an on-and-off private relationship until early 2017, when they became serious about each other and announced their relationship. Hopefully, we will soon hear wedding bells for the couple!

Jenna Johnson’s Instagram account is the medium she uses to update her fans about her life. So, if you are looking for some of her pics, then look no more! We have compiled some of them below.

1. Perfect Start to Her Morning

Starting my morning off sweating before #sytycd rehearsals. It's my hour to myself that gets me focused and in the right headspace for the day ahead. What are your favorite morning routines?

Just landed in AMERICA! Right in time to watch @danceonfox #sytycd Who's gonna watch with me tonight????? Tap for outfit credit ?

Climbed a castle, saw the sights, roamed the narrow streets….. oh and ate some more gelato. ?

Lost in the desert with @gnphotographyla

If you haven’t watched Val Chmerkovskiy and Victoria Arlen’s spectacular performance, then make sure you follow the link here.

Also, be sure to let us know your opinion about Monday’s elimination in the comments section below!