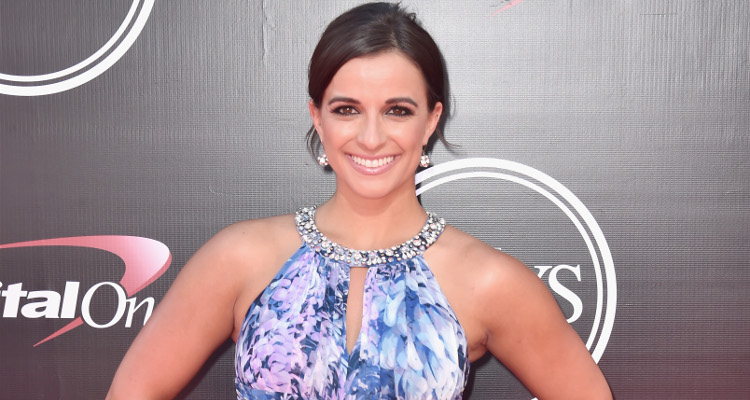 Who’s to say something is impossible? Miracles happen every day, and Victoria Arlen made the impossible possible! She’s the Paralympic swimming champ who’s going to be on our TV screens tonight, giving her best dance performance on Dancing with the Stars season 25. Read on to know more about the gold medalist.

If you believe in the power of hope, then Victoria Arlen on Dancing with the Stars will make you believe in miracles! Arlen and Val Chmerkovskiy are partnered up for the dance reality show on ABC. It’s a challenge for the dancer and he is up for it! With DWTS premiering tonight, here’s everything you need to know about the inspiring Olympian in our Victoria Arlen wiki.

Her Childhood Took a U-Turn

Victoria Arlen was born on September 26, 1994, making her age 22. She was a triplet among two boys, and they have an older brother, as well. Victoria Arlen’s family consisted of four children (including herself) born to Jacqueline and Larry Arlen. All went wonderfully in her life, but things took a sharp turn when she was 11 years old.

In 2006, Arlen developed rare conditions known as acute disseminated encephalomyelitis and transverse myelitis. Both are autoimmune disorders that cause swelling in the brain and spinal cord. The swelling doesn’t allow the body to function normally, causing the organs to give up.

Arlen told ESPN in an interview, “When I was 11, I got sick. My back and side ached, so doctors took out my appendix. Then my legs began giving out. My foot dragged. Within two weeks, I lost all feeling and function in my legs. Next, my hands stopped working. I couldn’t control my arms, couldn’t swallow properly or find the right words when I wanted to speak. It was as if someone was slowly shutting down the switches on the circuit board that controlled my body and brain. I was slowly slipping away from my family.”

It was a very difficult time for the Arlen family when Victoria slipped into a coma for over two years. She remembered hearing what people were saying around her, but was trapped in her unmovable body.

Doctors took three years to finally diagnose Arlen. Had they done it before 2006, she could have avoided the pain with just a small steroid injection.

While still unable to move, Arlen heard doctors tell her family that she would permanently be in a vegetative state. But her parents did not give up on her, and brought Arlen back home in New Hampshire to a hospital-like set-up.

Arlen’s three brothers would give her a daily update on what was going on outside of that room. And according to her, they empowered her to fight and be strong.

A Miracle in the Arlen Household!

It was in 2009 that Victoria Arlen slowly began regaining her senses. “I made eye contact with my mom,” she explained, adding, “Slowly over the next year, I began coming back to life. Raw sounds became words, became sentences. A twitch of my index finger became the wave of my hand.”

It was phenomenal for Arlen when she began learning how to live all over again. She learned how to use Facebook, and finish a steak dinner, all of which she credited her family for their help.

Arlen was recovering more each day, but another problem arose. She couldn’t feel her legs and was told that the swelling in her spinal cord permanently damaged them. Many experts told her that she should start getting used to a wheelchair and that walking would only be a distant dream.

11 Years Ago I Became Paralyzed And Was Introduced To The Spinal Cord Injury World. I Never In A Million Years Imagined What This World Would Be Like And The Emotions That Would a Come With It. I Also Never Imagined The Journey That I Would Embark On And How Many Years, Hours Of Training And Fight It Would Take To Get Back On My Feet. We Never Truly Know What We Have Until It's Gone. It Is Shocking That Every 48 Seconds Someone Becomes Paralyzed. Someone Has To Use A Wheelchair And Adapt To A Completely New Normal. They Have To Fight Harder Than They've Ever Fought To Get Back The Life And Movement That Was Suddenly Taken Away From Them. September Is Spinal Cord Injury Awareness Month So Please Spread Awareness And Be A Voice For Those Who Need It Most. I'm Dancing For Those Who Are Re-Learning The Dance Of Life And Finding The Life And Movement That Was Taken Away From Them. #KeepFighting

She went to high school in a wheelchair, but it wasn’t something she saw for herself. Arlen knew it wasn’t the life for her, and she reached a breaking point when she came home from school one day after being bullied by kids from her class. Her triumphant return to a new life and a new school was stained by bullies, and her parents promised to do whatever it took to get her out of that chair.

A Fish out of Water!

Victoria Arlen always loved the water, and won some local recognition for swimming, as well. “We lived near a lake, had a pool in our backyard and as soon as I was old enough, I joined a swim team. By 10, I was winning local events. As I began to heal from my illness, I came to the sad realization that I would never swim again,” she explained.

This time around, Arlen’s saving grace was her brothers, when they swung her into their swimming pool in 2010. It shook her up, but she soon found out that she was still pretty good in the water! This continued her new lease on life, and it made her confident again. Although she enjoyed swimming, she enjoyed being out of the wheelchair even more!

In 2012, Victoria Arlen was at the London Games on the U.S. Paralympic swim team. Her amazing performance and due diligence earned her two silver medals and a gold at the 2012 Paralympics. She set a world record in the 100-meter freestyle and made her family, and herself, proud.

Arlen returned home with a happiness that was never seen before. But, she was still determined to get out of her wheelchair and use her legs.

Do the impossible. Beat your demons. Never ever give up. Face your fears and follow your dreams. Thank you for giving me hope. #victoriaarlen #wcw #myelitisfighter

She was more determined than ever to walk again, and this is when she found Project Walk in San Diego. They help people dealing with paralysis to walk again and fulfill their dreams. Now there was no stopping her, and she soon found herself working for ESPN as a sportscaster in 2015.

Arlen had a full recovery in 2016. She was able walk, run, workout, and even pose like a professional model! It was a triumph like no other!

Arlen is now on DWTS season 25. Although it might look like a big step to take, Victoria Arlen and Val Chmerkovskiy are more than prepared for the show!

Don’t forget to watch Dancing with the Stars tonight at 8:00 p.m. on ABC!