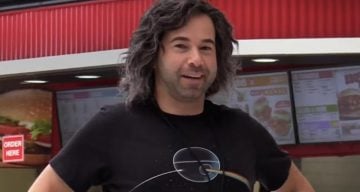 Who doesn’t like Impractical Jokers? In one episode, James Murray, a.k.a. Murr, was seen with long hair. Surprised? We were, to! But nonetheless, hilarity ensued. So, why was Murr wearing a wig? If you want to know why Murr had long hair, then keep on reading—the reason will literally make you laugh out loud!

Impractical Jokers is about four guys—Brian “Q” Quinn, Salvatore “Sal” Vulcano, Joseph “Joe” Gatto, and James “Murr” Murray—who make each other to do public pranks while hidden cameras film them. Whoever can’t complete a challenge gets a thumbs down, and the losing joker is punished at the end of the episode.

Often, the punishments are humiliating, painful, and even disgusting. If a joker refuses the punishment, he will be kicked off the show. So, they need to suck it up and go through the ordeal!

In season 6, episode 17 of Impractical Jokers, titled “The Q-Pay,” Sal, Joe, Murr, and Q send some TMI messages to strangers. Later, they try to wreck each other’s chances at a dating event.

It turns out that things didn’t really go well for Murr.

He loses the challenge, and his punishment teaches him that with great hair comes great responsibility. Though, this is not the first time they messed with his hair.

In one episode, the guys had Murr’s eyebrows shaved off for a new driver’s license photo. This time, though, they went another route.

Q shaved off his amazing hair and had it transformed into a wig. Murr is clueless about the ordeal, and for his punishment, the guys decide that he has to wear the wig made from Q’s hair for the rest of season six.

Needless to say, Murr is not happy to flaunt the new look. To add to his misery, the guys decide that he needs to take a new passport photo with his luxurious locks. We all know that passports are valid for 10 years, so that could be a problem!

However, before he gets his photo taken, Murr has to walk around the park and interact with the pasersby sporting his new look.

But the Joke’s on Them!

The rest of the guys thought that Murr would have trouble explaining the different ID photos to authorities. But his fame is surely helping him!

Murr explained, “The funny thing is, whenever I go through customs they recognise me from the show, so they’re waiting for the passport, they’re waiting to see it, and they ask to see my license too. So I’ve become a running joke to Homeland Security agents.”