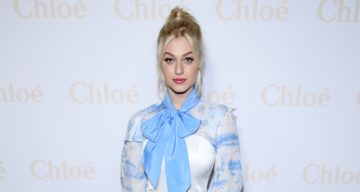 Jackie R. Jacobson arrives at Flaunt And Chloé Celebrate A Change Of Seasons with Charli XCX at The Jeremy Hotel on April 17, 2019 in West Hollywood, California. (Photo by Randy Shropshire/Getty Images for FLAUNT Magazine)

Jackie R. Jacobson is one of the leading starlets in the new generation of actors capturing audiences’ attention. Starring in the new Netflix original series and movie, Malibu Rescue, this young actress is soaring in popularity before she’s even graduated from high school! Her star continues to rise, so we’ve got Jackie R. Jacobson’s wiki to get you up to speed before she’s too famous to keep up with.

Jackie R. Jacobson was born on February 4, 2002 in Los Angeles, California. She is the youngest child and only girl born to Jerry and Helen Jacobson.

According to her most recent interview, she’s a first-generation American in her family. Her parents hail from Russia and Russian is Jackie’s first language.

Her brothers, David and Robert, are hockey players and she grew up in hockey rinks watching them play.

The Jacobson family resides in Calabasas (yes, the Kardashian neighborhood) and she’s currently a student at Calabasas High School.

Jackie has a hectic schedule balancing academics with workouts and acting classes. But she’s graduating soon and has plans to go to community college.

Ever since she was a child, Jacobson had a knack for performing. She says she used to memorize scenes from TV shows and reenact them for her family as a child. No surprise that a young Jackie dreamed of being on TV!

Encouraged by her parents, Jackie set about her acting career when she was only 10 years old. After a few short films, her first TV role was in an episode of Criminal Minds in 2012.

i am actually clueless

She played one of the victims, Mackenzie, in an episode that she called a “crazy” experience. In one of the scenes, she was dragged from the bed by her feet—a last-minute addition by the director she had no idea about. “So the scream I let out was 100% real.”

Nonetheless, she loved the experience and credits it for introducing her to life on a set. The experience surely worked, since she went on to appear in several TV shows, including the likes of Speechless and The Night Shift.

Jacobson is a gifted baker and hopes to go to culinary school one day. But her immediate dream is to work with Quentin Tarantino.

Her breakout role comes in Netflix’s Malibu Rescue, a teen comedy. After the movie premiered in May, Jacobson and the original cast returned for a TV series that debuted on June 3.

NO MORE TIME FOR SLEEPING! MALIBU RESCUE : THE SERIES IS LESS THAN 24 HOURS AWAY! #maliburescue @netflixfamily

She portrays Dylan, a young lifeguard and member of the Flounders team, a ragtag group of teens trying to prove that they are capable lifeguards. Jackie, who believes Dylan is an underdog, relates to her character who can be “awkward” and “dorky” at times.

She had originally auditioned for Lizzie, now portrayed by Abby Donnelly. But at the callbacks, Jacobson and the producers felt she was a better fit for Dylan.

Jacobson Has a Boyfriend

To broken hearts everywhere, Jacobson is taken! The starlet is dating one Nick Crystal, who goes to her school.

we went to prom last night thanks to @friartux #ad

The very cute (and good-looking!) couple recently went to their high school prom. Being an influencer with 27.4K Instagram followers and growing, Jacobson has social media endorsement deals that include promoting Friar Tux, which Crystal wore to the prom.