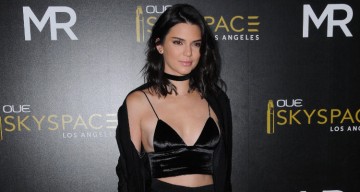 Keeping Up With The Kardashians star, Kendall Jenner, is no stranger to controversy. The stunning Victoria’s Secret Angel, has been dating L.A. Lakers point guard, Jordan Clarkson, and has kept things under the radar for a few months now. Their relationship recently came to light when it was revealed that they had been secretly dating since last fall. It seemed like the 20-year-old model and the 24-year-old NBA pro had found true love and were pretty serious about each other, but according to the latest reports, it looks like we may have spoken too soon.

Last week, Kendall Jenner was spotted out and about in Beverly Hills, on what seemed like a date with rapper A$AP Rocky. The question on everyone’s minds is, “Is Kendall Jenner cheating?” and “Is Kendall Jenner dating A$AP Rocky?” Well, it certainly seems like the gorgeous Vogue model is seeing two men at the same time. Allegedly, Kendall is simply having a ‘fling’ with A$AP Rocky, and it’s nothing serious. This isn’t the first time that the two have been linked together, as he was spotted with her at Kanye West’s Yeezy 3 show in New York City in February, as well as Kendall’s PacSun event. The duo also posed for shutterbugs in Paris a few months ago.

The rapper, whose real name is Rakim Mayers, has dated model Chanel Iman and rapper Iggy Azalea in the past. According to reports, Kendall doesn’t want to have a serious relationship and is currently “playing the field.” She is still officially dating Jordan Clarkson, but is having a little fun with A$AP on the side. Recently, Kendall was spotted partying in Hollywood with the basketball player. It appears that Kendall wants a “carefree summer and to go out with all her friends and date.”

While we agree that the KUWTK star is too young to be settling down, we can’t help but wonder what could be the reason behind Kendall’s sudden change of heart. Jordan Clarkson and Kendall Jenner made quite the power couple, and fans even categorized them together. Could it have anything to do with older sister Kim Kardashian’s disapproval of their relationship? It has been reported that Kim is opposed to their blossoming young love, since she thinks that the L.A. Lakers star is “not famous enough.” Whoa! Apparently, Kim dissuaded Kendall saying “Jordan’s a nice guy, but he barely has 150,000 followers on Twitter.” The older sister voiced her concerns that dating the basketball player wasn’t a “smart move” and that she should consider dating a musician or rapper if she wanted to gain more fame and recognition. Sagely advice from a protective sister perhaps?