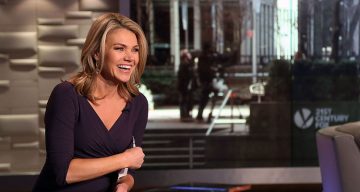 Heather Nauert was a very well-known face at Fox News, until she got a call from the State Department that would change her life. The State Department has hired the Fox & Friends anchor as their new spokesperson, and she recently gave her first press briefing.

Fox News anchor, Heather Nauert commanded attention whenever she appeared as an anchor on Fox. She has since left addressing the public and is now addressing the media as a State Department spokesperson. However, she appeared to have lost her knack on-camera and fumbled through her first press briefing. Let’s just say there were more than a few Sean Spicer comparisons! Here’s more about her and her impressive career in our Heather Nauert wiki.

Starting Her Career with Fox

Heather Nauert is the only girl out of four children. Her father, Peter Nauert, was an executive in the insurance industry in Illinois, where she was raised with her brothers- Justin, Jonathan, and Joseph. She went to Pine Manor College in Massachusetts and earned her Bachelors in communications from Mount Vernon College for Women. She also has a master’s degree in Journalism from Columbia University.

She began her journalism career with the syndicated weekly business program, First Business. From 1998 to 2005, she worked for Fox News as a contributor, and then as a correspondent. During that time, she was a regular contributor for The Big Story.

In 2005-2007, she held different positions in different networks on shows like World News Tonight, Good Morning America and Nightline. She also received an Emmy nomination for her work on the series, 13 Around the World.

She has done newscasts on the Fox-owned station, WNYW in New York City. She returned to Fox News as a John Gibson’s co-host for The Big Story, the same show she contributed to at the start of her career. Her last job was on Fox and Friends and Fox and Friends First. During her broadcasting career, she has earned a net worth of $3.0 million, with a reported salary of $500,000.

#Friday ! If ya have to work a 5a show, it better be with a friend! @heatherchilders1 ❤?? Thanks for making the extra early wakeup a-ok! #betterwithfriends @foxandfriends @foxfriendsfirst #foxnews #foxandfriends

She has Prior Experience in the Government

Early in her career, the 47-year-old used her expertise working for the non-profit think-tank, Council on Foreign Relations. She was also a government affairs consultant on issues like health insurance, social security and taxes.

The Trump administration was reportedly considering her as spokesperson for the U.S. Department of State. In April, she was appointed as spokesperson. She recently gave her first press briefing on June 6, which didn’t go all that well.

Her fellow-journalists noted that she didn’t have immediate answers to their questions, and had to go through a thick binder before she could answer. A few also complained of a disconnect between what Nauert said was the State Department’s foreign policy and the Trump administration’s.

Proud to have my pic taken in front of ?????? at #statedepartment today @statedept @statedeptspox

She’s Married to a Banker

He was Managing Director at UBS Investment Bank and North Sea Partners LLC. He now serves as MD at Goldman Sachs. He was also a member of the financial sponsors group at Morgan Stanley.

Nauert and Norby married in 2000 and have two kids together; Peter (born October 2009) and Gage (born December 2010). Unlike his wife, Norby is a little camera-shy and keeps a low profile. He does make a few appearances on his wife’s Instagram, though.

#raisingboys No wonder they were so quiet ??