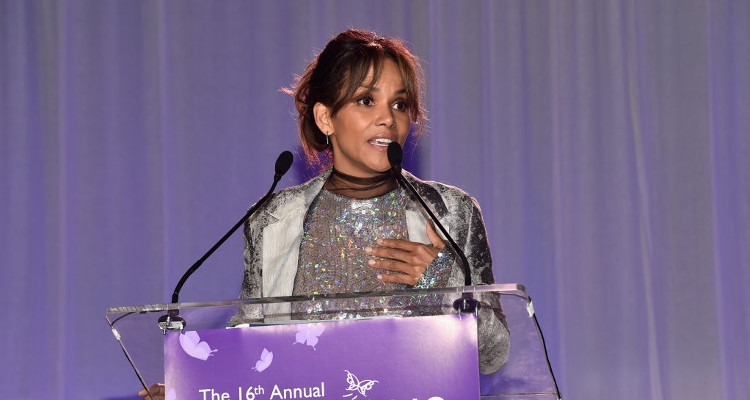 Halle Berry just set off some red carpet mayhem! She showed up at the 16th Annual Chrysalis Ball in a shimmery silver number that hugged her curves, and possibly showed off a baby bump! Are Halle Berry’s kids getting a new sibling? We’ve got the scoop!

Halle Berry hit the red carpet at the annual Butterfly Ball in L.A., looking stunning as always. Her figure-hugging silver dress was eye-catching enough, but everyone was more shocked to see what is speculated to be a baby bump! Berry hasn’t made an an official announcement and currently, she’s single, so it can’t be confirmed whether or not she’s pregnant. She is already a mother to two adorable children, daughter Nahla Ariela Aubry and son, Maceo Robert Martinez. With Halle Berry possibly pregnant in 2017, will Nahla and Maceo be getting a new baby brother or sister? Here’s more about Halle Berry’s kids, right here.

#1. Fight for Her Daughter

Halle Berry met French Canadian model, Gabriel Aubry at a Versace photo shoot in 2005. They began dating and Berry became pregnant with her first child. She gave birth to Nahla Ariela Aubry in 2008. Two years later, the couple separated. What followed was a highly publicized and bitter custody battle for Nahla.

The two fought for everything from settlements to Nahla’s hair! Berry accused Gabriel of straightening their daughter’s naturally curly hair, and adding highlights to make her look less African-American. When Berry began dating French actor Olivier Martinez, she wanted Nahla to move from L.A. to France with her, but with Aubry’s protests, the judge denied her request.

There was even a physical altercation between Berry, Aubry and Martinez! Nahla’s parents finally reached a settlement, with Berry being ordered to pay Aubry child support and legal compensation.

We have the toughest but most rewarding job on earth. So today, let’s celebrate each other. #mothersday

#2. Nahla Takes after Her Mother

Nahla is an adorable nine-year-old who speaks both French and English. While she takes after both her parents, Berry can’t stop gushing about her daughter’s philanthropy.

When Nahla was seven years old, she traveled to Nicaragua with her mother on Halle Berry’s World Food Program. After they returned to the U.S., Nahla decided to send the children in Nicaragua all of her toys. She also ran a lemonade stand to raise funds to send to the children.

“What I loved about that was that it made her philanthropic heart just burst open, and now she’s thinking more about how she can help others, and not what doll she’s going to get next — she’s thinking about who she can give that doll to,” Berry said about her daughter’s gesture. With a mother who’s known for her philanthropy, we’re not surprised that Nahla inherited her mother’s generous traits!

Happy Mother’s Day. Today and everyday, I honor all mothers for their strength, patience, and grace.

Berry and her French beau, Olivier Martinez, got married in 2013 and she gave birth to their son, Maceo Robert Martinez a few months later. Back in 2014, Berry told Ellen DeGeneres that discovering she was pregnant with her second child at the age of 47 was unexpected, since she thought her baby-making days were over!

Speaking of her “geriatric pregnancy” she said, “I was, you know, on my way … this is probably way TMI, but I was really, you know, kinda premenopausal so to have this happen was a huge [shock].”

After her divorce from Martinez in December 2016, and with Maceo being just three years old, Berry hasn’t spoken out about dating anyone. But recently, she stepped out on the red carpet showing an apparent baby bump! Could she pregnant at 50? The actress hasn’t confirm her pregnancy, but that’s not stopping the rumors.

Just last week, she posted a picture on Instagram wearing a t-shirt that said “No More Boyfriends.” But there’s no sign of a baby bump there. She also posed behind a translucent glass window with absolutely no sign of being pregnant. Was it just the illusion of the glittery dress that sparked the baby bump rumors? Many also noted Berry’s hands cradling the “bump” while smiling for photographers on the red carpet. However, some sources are reporting that a rep close to the star has shot down the speculations that Berry could be pregnant, calling the rumors “completely false.”

Summer's coming… let's shine up our crowns ladies! Let's do it like @justmike_

We don’t know yet if Nahla and Maceo are going to have a sibling soon, and we can only wait for Halle Berry herself to make an official statement on the matter. Stay tuned for updates!