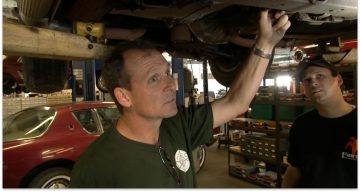 Velocity TV’s FantomWorks has been doing great on TV and fans simply love how veteran Dan Short runs his shop! Things aren’t always smooth, but the crew gets the job done. So, if you were wondering more about Dan Short, here’s a wiki to help you get to know him better.

Short has known he was interested in cars since he was little. But he hadn’t really thought about getting into the business when he joined the armed forces. Things turned out great for the vintage motor enthusiast after he founded FantomWorks, which is a hit on TV today!

Daniel R. Short was born in 1962, making his age 56. He was five when he became fascinated by cars, especially the ‘67 Camaro, which was the talk of the town when it came out.

He began tinkering around with cars when he was about 16, and his interest only grew. He then enlisted in the Army in 1979, at the age of 17.

He was a Green Beret (The United States Army Special Forces), and was deployed a lot. He says that all the while he was in the medicine and weapons team, he thought about cars.

“The guys would always give me a hard time because I would show up to work with grease under my fingernails, and people would look at me like, ‘You can’t do medicine with grease on your hands.’”

Posted by Velocity on Wednesday, November 11, 2015

When Dan was at home, his weekends were spent in the garage, learning about and focusing on motors, engines, and the various parts a car had.

He also took classes on body paint, and would hang out in repair shops lending a hand while learning the trade.

He was 19 when he bought his first car, which was the glitzy Chevrolet ‘67 Camaro, and the fascination did not stop there.

He read countless books on that particular model and many other styles, too, learning and adapting to the metal-filled world of car making.

“As I went along in my military career, I realized I wanted to do something different, and I started having an inkling of creating my own company, ” Dan said. “It’s one thing to build cars as a hobby. It’s another thing to run 75 cars at a time through a business. It’s a completely different world.”

DRS Automotive Was Founded in 2006

FantomWorks is the brainchild of Dan Short and was founded over a decade ago. The shop began as a car restoration place, and has now expanded to manufacturing some parts, too.

Short is currently located in Norfolk, Virginia, and operates the shop from there.

There are some clients (with huge wallets) who don’t mind building a car from scratch, but they are very few. Dan’s shop mostly specializes in vintage car restoration and modifications, and he makes sure he gives his clients the best of the best.

The first episode of FantomWorks aired on Velocity in 2013. In episode one, Dan and his crew restored a 1963 Chevrolet Corvette and a Ford Model A hot rod, marking the show as a huge success.

Things have been looking great for Dan since he went on air. His revenue shot up and he became widely popular for car restorations.

Season 8 ended in July this year, with the crew fixing up a classic Mustang. And fans have not had enough yet!

Though there is no confirmation of a ninth season, we’re sure the coming new year will be a great one for Dan and FantomWorks.

Who Is Dan Short’s Wife Melissa?

Melissa Martel Short is also a veteran, as she served in the U.S. Navy. Her bio on the official FantomWorks site reads, “In many ways, she’s the “guy (or gal) behind the guy” for complex operations at FantomWorks. Recently retired from the U.S. Navy as a Commander, she gets to enjoy a second career at FantomWorks.”

She is in charge of keeping the accounts in order, updating customer tabs, and “making sure they don’t go broke in the process.”

She’s originally from Muleshoe, Texas, but now calls Norfolk, Virginia her home, where she shares a life with husband Dan and son Zach.

Dan Short Earns Heavily through the Shop and from TV

Short’s net worth can be estimated at $3.5 million. He’s not only doing great for himself and the shop with all the great modifications, but he also earns a salary through the Velocity TV show.

Typically, a reality show like FantomWorks earns its cast members anywhere between $10,000 and $50,000 per episode, depending upon the popularity of the show.

Which means through the eight seasons on Velocity, Dan Short could have probably earned a cool $2.0 million.

Back in 2012, a client sued Dan Short for alleged fraud, and dragged him to court. The case reportedly ended in 2014, with Short’s name cleared.

A couple who had walked into the shop asking for a restoration deal on a 1960 Ford Thunderbird sued Short after a miscommunication over a car part price. The couple had paid Short $30,000 in two installments, after they were told that the restoration would take no more than $40,000 in total.

But, before they could make the last installment, a replacement part the couple believed would cost just $2,000 or $3,000 was bought by Short for $6,000, causing the couple to feel cheated.

After evidence was collected and an argument was made, the jury returned a verdict in favor of Short.

The couple had called Short a liar, and also added that his business practices were illegal and shady. Short filed a defamation claim in response, which was later dismissed.