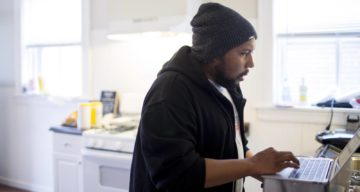 Charles Wade was a well-known activist with Black Lives Matter in the Ferguson and Baltimore areas until 2016. With protests against racial injustice picking up steam recently, his name has cropped up again in social media discourse about the BLM movement. Wade was accused of prostituting a minor and was reportedly arrested. His association with a nationwide social movement has many questioning if all this is true. Was Charles Wade really arrested? Here’s what you need to know about him.

A BLM Leader, Charles Wade Was Arrested in 2016

Charles Curtis Wade, born on October 15, 1982 and a native of Bowie, Maryland, was an activist with Black Lives Matter four years ago. He founded Operation Help or Hush in Ferguson to aid protestors to keep up their fight, including raising money to feed and temporarily house protesters.

Before that, he was known as a celebrity stylist. Solange Knowles was reportedly his most famous client.

In May 2016, he was arrested in Prince George County, Maryland, and charged with prostitution and human trafficking. According to authorities, Wade allegedly placed online ads offering meet-ups with a 17-year-old girl.

An undercover officer reportedly responded to the ad and met with the minor girl in a sting operation. The girl said that Wade was her “manager.”

Charles Wade had taken to his Twitter page (now deleted) to deny the claims. He claimed that he believed the girl was 20 and that he was asked to temporarily house her at a hotel. He was arrested a few hours after he reportedly set the teen up in a hotel room. The girl would contradict Wade’s claims when questioned by the police.

“As the person who booked, paid for, checked in with government issued identification, I was also arrested as I was walking to store on about a half dozen charges related to her activities and arrest,” Wade said.

Wade posted bail of $25,000 two days after his arrest. His trial was expected to begin in June 2016. It’s unclear whether Charles Wade was convicted or sentenced. Maryland court records reveal that the case was closed in 2016. The exact details are not known.

While his charges and arrest were used to disparage the BLM movement, Black Lives Matter didn’t respond to his arrest. However, in his previous Twitter statement, Wade distanced BLM from his arrest.

“This situation in no way should reflect on the movement or anyone else in the movement other than myself,” Wade said. “Ultimately, I had the final decision on moving forward with housing her and putting my name on the line. And ultimately, the embarrassment now caused and whatever consequences there may be are solely mine.”

Wade claimed he started Operation Help or Hush to assist the BLM movement. However, he denied being involved in it politically.