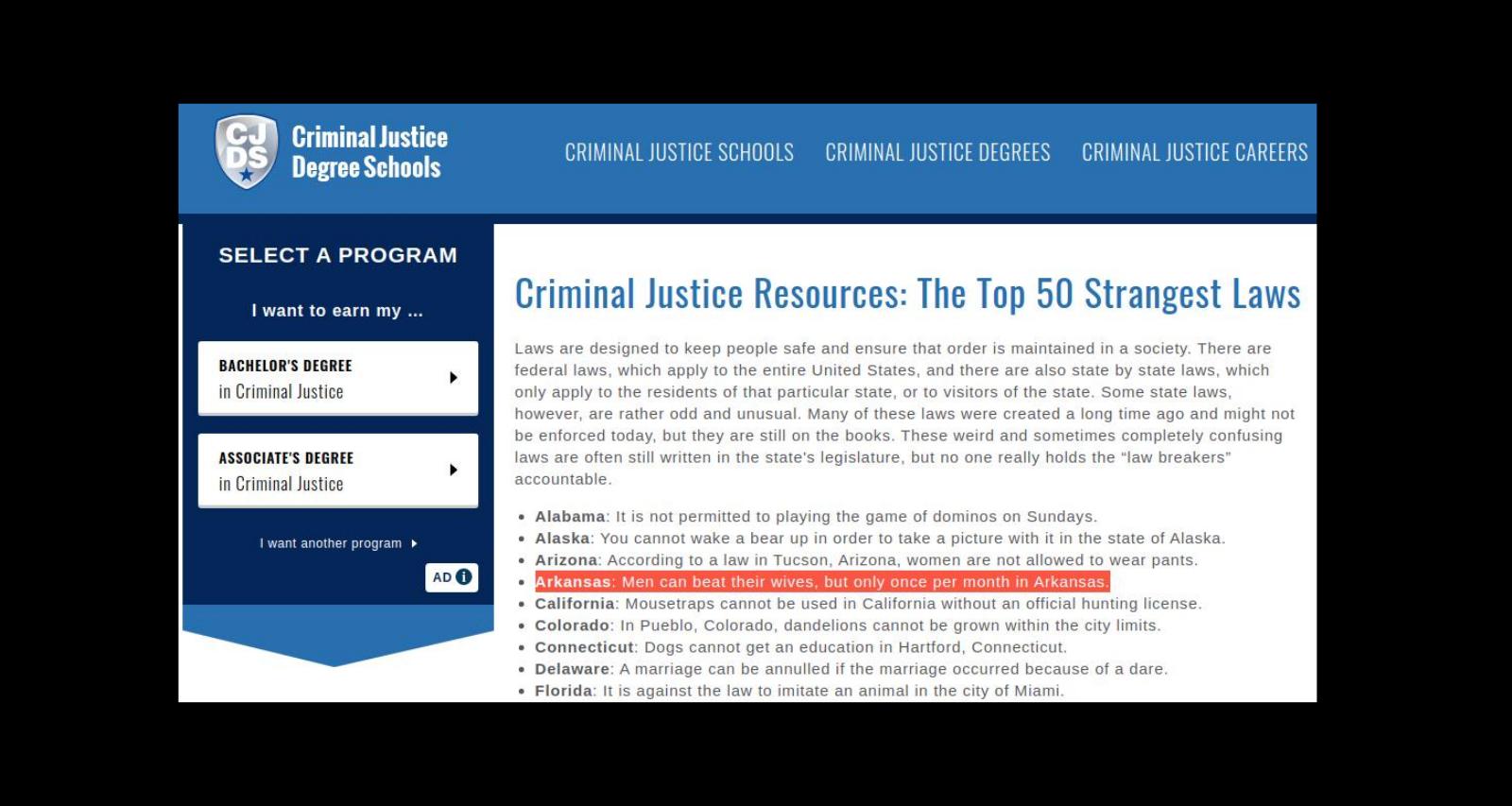 Arkansas law allows a man to beat his wife, but only once a month

If you like looking up strange, archaic laws in different states, you probably came across one that has haunted Arkansas for some time: a supposed law saying that men can beat their wives in Arkansas, but only once a month. It’s as strange as it sounds. Of course, it’s way out of step with current times and morals for any law to permit “wife-beating” or domestic violence of any kind under whatever stipulations. For years, curious minds have been searching for answers about this claimed law. Fortunately, beating your spouse is against the law everywhere.

Websites and social media pages compiling absurd laws in different states of the U.S. have been popular for years. But this curious law supposedly permitting “wife-beating” in Arkansas seems to be the most talked about at the moment.

As this law supposedly goes, Arkansas allows a man to beat his wife, but not more than once a month. Of course, the question is, if this law is real, why even that “once” at all?

Legal discussion forums have shared this ridiculous law and social media has brought it up time and again. There was a recent discussion thread about weird laws on Twitter with this alleged Arkansas statute as the opener.

There are other contenders for most outlandish law. Like teachers with a bob hairstyle have to forego a pay raise (so, no educators can be stylish?) or unmarried women who parachute on Sundays can be jailed in Florida (what about on Thursdays?). And apparently dogs can’t get an education in Hartford, Connecticut (were pooches taking up too many preschool spots?).

There’s an assumption that these ridiculous regulations were made long before the 21st century and are hence from a time very different from now. (So, dogs could go to college before?) But there’s no official confirmation of whether these laws really exist.

Does “The Natural State” condone domestic violence? Fortunately, one wise mind has scoured the Arkansas state laws to debunk this.

Also Read: Does Hand Sanitizer Spontaneously Combust if Left in a Car?

Lorraine Lorne, the assistant director of the Young Law Library at the University of Arkansas, was asked if there are any records about the state’s supposed “wife-beating” law for her ethics class. Lorne was surprised by the question, researched the Arkansas Code, and published a paper in 2007 debunking “stupid laws” found on the Internet.

To put it simply, Lorne mined through Arkansas laws and found that no such thing exists. In fact, none of the statutes listed on silly law sites can be found in existence. Lorne dubs these “stupid laws” as legal versions of urban legends.

(If you or anyone you know is in an abusive relationship, call the National Domestic Violence Hotline number, 1-800-799-7233, for help.)