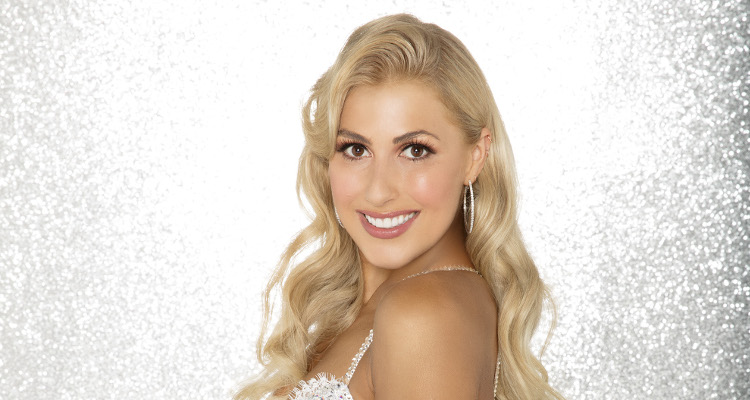 Emma Slater took home her first victory on Dancing with the Stars last season with NFL pro, Rashad Jennings. This season, she’s back with a new celebrity partner, Drew Scott of the Property Brothers, and is hoping to win the Mirrorball Trophy again!

Reigning Mirrorball champion Emma Slater is back to turn up the heat in the ballroom, as Dancing with the Stars returns for season 25. Her celebrity partner this season is Drew Scott, one-half of the handsome Property Brothers. Slater is currently getting him ballroom-ready to take home that glitzy Mirrorball Trophy for a second consecutive time!

Find out how the gorgeous pro and the Property Brother are faring in our very own Emma Slater wiki.

This ballroom beauty hails from across the pond in Tamworth, England. Slater joined local stage schools and participated in various productions at an early age. Fast forward years later, and she became the first British personality, celebrity or pro, to win Dancing with the Stars in the U.S.

Before she made her way to DWTS, Slater took Latin and ballroom dancing at the age of 10. And when she was 15 years old, she took part in the fitness video Latinasize, which was filmed at Pinewood Studios in London, England.

Slater began competitive dancing in her teens. She won the British Under 21 Latin American Championships at the Blackpool Closed 2005 at the age of 16. The following year, she won the United Kingdom Under 21 Latin American Championships at the Bournemouth Pavilions in England. Consequently, her winning streak landed her in the world’s top 10, allowing her to represent the U.K. in competitions around the world.

While making strides in competitive ballroom, her professional dance career was also taking off. And her biggest break came with the late George Michael. She appeared in Michael’s music video for “Round Here” released in 2004 and produced by Bikini Films on location in London.

Needless to say, George Michael had a special place in Slater’s life. Incidentally, the music superstar passed away on Slater’s birthday, December 26, 2016. She was devastated by his untimely death.

After sharing her birthday festivities with her Twitter and Instagram followers, Slater learned of his passing and posted a tweet expressing her grief, “I’m truly devastated. I grew up with him like so many of us did. All my love goes to his family at this time.”

Omg George Michael ? I'm truly devastated. I grew up with him like so many of us did. All my love goes to his family at this time ? #Legend

It was also at 16 years old when Slater joined the hit theater show Simply Ballroom and toured the U.K., including the Theater Royal and Drury Lane in the West End, as well as overseas destinations like the U.A.E. and South Africa. While in South Africa, she also stopped by the South African version of DWTS.

After Simply Ballroom, she continued performing in theater productions. These included a stage production of Dirty Dancing, where she was the Principal Latin Dancer and Ballroom Supervisor as well as an understudy for the protagonist’s role, Lisa Houseman.

She also had an extended run at London’s prestigious West End, a role in Cheek to Cheek at The Coliseum, and Latin Fever at the Peacock Theater. She also performed on Broadway and around the world with several of her DWTS castmates in the stage show Burn the Floor.

With her jet-setting dance career, she has earned a net worth estimated at $300,000.

On ya bike!! Had a very special night. You'll get why when you watch @dancingabc this Monday ???

Slater joined DWTS in season 14 as a troupe dancer before being promoted to pro status in season 17. Partnered with comedian Bill Engvall, they made it all the way to the top 4 before being eliminated. She got another shot at the Mirrorball Trophy the following season with Billy Dee Williams, but had to exit the ballroom owing to Williams’ back injury.

She was partnered with LMFAO singer Red Foo in season 20 but didn’t make it past the first week. Then in season 21, she and Hayes Grier finished in eighth place before being eliminated. And after sitting out season 22, she returned in season 23 with Ricky Perry and finished in 12th place.

Season 24 was Slater’s season when she was paired with Rashad Jennings, an NFL free agent with a knack for impressing both on the field and in the ballroom. With consistently good performances, he beat out early front-runners like Normani Kordei, Simone Biles, Nancy Kerrigan, and Heather Morris. Jennings helped Slater win her first Mirrorball Trophy last season.

She returns as the defending champion of the ballroom and her partner this time is one-half of the Property Brothers, Drew Scott. Team Hot Property is rehearsing between Scott’s hectic schedule. He’s traveling to different cities filming Property Brothers with his twin brother Jonathan, and Slater is tagging along to squeeze in some rehearsals.

“Emma and I will be rehearsing in a different city every night,” said Scott. “But this is a once-in-a-lifetime opportunity. And I’m going to learn how to dance just a few months before my wedding. That’s going to be amazing.”

Hey there @lindseystirling & @markballas, wanna dance off??! We challenge you to beat our 'DIY dolphin'. We get if you don't wanna though, we can be quite intimidating ??? #TeamHotProperty @dancingabc @mrdrewscott

Waltz Down the Aisle

The 28-year-old had an on-and-off relationship with fellow DWTS pro, Sasha Farber. After they rekindled their relationship, Farber got down on one knee on live television and proposed to her. They have been planning a wedding ever since.

Slater and Farber have postponed their wedding until after season 25. “Wedding plans have kind of been put on the back burner,” Slater shared. “We’re just so busy!”

Hopefully, there’ll be wedding bells for this couple soon. While Emma Slater will be taking the ballroom with Drew Scott, Sasha Farber will also return as part of the troupe this season.

He got stung by a bee yesterday ??? @sashafarber1