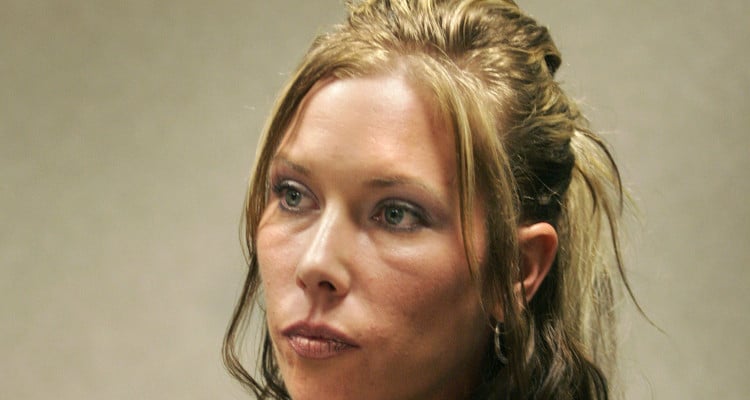 Eminem’s BET cypher video, where he slams President Donald Trump and denounces his fans who support the country’s current leader, is making headlines. Plenty of stars, from fellow rappers to athletes, are backing him. But we wonder if Eminem’s ex-wife feels the same way? If you want to know more about her, then take a look at our Kimberly Anne Scott wiki.

Born on January 9, 1975, in Warren, Michigan, to Kathleen Sluck, Kimberly Anne Scott’s age is 42. She had a twin sister, Dawn Scott, who died in January 2016 of an apparent drug overdose. Not much is known about her childhood or parents, however, she did not have it easy and ran away from home with Dawn in 1988 to escape their abusive, alcoholic stepfather.

How Did Eminem and Kimberly Anne Scott Meet?

She met the rapper when she was 13 and he was 15. They were at a house party and Eminem stood on top of a table with his shirt off, “mocking the words to LL Cool J’s ‘I’m Bad.'” He soon brought Scott to his mother’s house, asking if she could live with them.

In 1989, Scott and Eminem started their on-again off-again relationship. Though passionate, it was at times dysfunctional too.

Birth of Kimberly and Eminem’s Child

Hailie, is that really you…?! ??? ( ? via @hailiescott1 ) #eminem #hailiescott #transformation

A post shared by HuffPost Entertainment (@huffpostentertainment) on Mar 28, 2017 at 7:48am PDT

On December 25, 1995, Scott gave birth to their daughter, Hailie Jade. To give her a better life, Eminem worked hard to make ends meet because, “He didn’t want his daughter to grow up like he did, living from day to day and moving from week to week.” In 1996, the couple broke up and Scott moved to a one bedroom apartment with Hailie, and Eminem moved in with his mother.

Four years later, Kimberly Scott and Eminem rekindled their romance and tied the knot. However, making it work was not easy. By that time, the rapper was reaching new heights with his career, and one particular song that resonated with fans was one about murdering Scott with the help of their infant child. Though married, Eminem still performed “Kim” on stage, while attacking a blowup doll made to look like her.

“Seeing the crowd’s response and everybody cheering, singing the words and laughing and it just felt like everyone was staring at me. I knew that it was about me and that night I went home and I tried to commit suicide,” Scott said. “When Marshall’s first tour started is when his ego just went ‘poof.’ Like he was God, that’s what he thought. … I was just told that I should be grateful that he still talks to me, you know how many women throw themselves at him. And I just pretty much felt like a piece of crap.” Not long after, Scott was spotted kissing John Guerra, an acquaintance of theirs, and Eminem was arrested after hitting him with a gun. The two soon filed for divorce, which was finalized in 2001.

Despite their differences, the two kept in touch for the sake of their daughter. In 2006, they decided to give their relationship a second chance and remarried. “We decided on Jan. 14,” Scott revealed at the time. “Marshall wanted to do it because it was our 15th year together from our original day we started going out. And even on that day I said, ‘Let’s just go through the ceremony but not sign the marriage license.’ Because I was just afraid of what would happen if we had to go through a divorce, our kids. And then 41 days later, Feb. 25, Marshall left.” They agreed to have joint custody of Hailie.

In 2003, Scott was reportedly charged with cocaine possession, and was sentenced to a month in jail after violating her probation. She was fined and on probation again in 2015, after crashing her car into a pole while in an intoxicated state, later revealing that it was a suicide attempt. “It was intentional, I sat at the end of a road where I knew no one else but myself would get hurt. Yes, I drank, I took pills and I aimed for a pole,” Scott said, adding, “I never expected to make it out alive. Yeah, I can pay bills. Yeah, I can get my kids whatever they ask for and it’s great to see them happy. But you lose friends, you lose family, you have no one you can trust you can speak to.”

Reports claim that after her first divorce from Eminem, Scott started dating and had a daughter named Whitney with Eric Hatter, who Eminem is said to have custody of. Kimberly Anne Scott’s net worth is currently unknown.