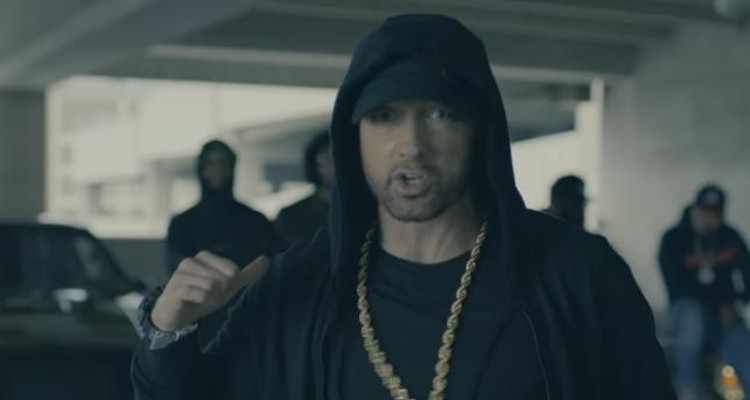 Slim Shady threw some burning shade at President Trump at the BET Hip Hop Awards on Tuesday, October 10. Eminem dissed Trump in a BET cypher video that is sure to leave the president scorched.

Eminem has always been the highlight of the BET Hip Hop Awards, but last night’s performance topped any of his others. He tore into Trump with a blistering freestyle for simply existing. How will Trump respond to Eminem? The president would have to somehow get Mike Pence into an Eminem concert so that he could walk out of it. Check out Eminem’s freestyle BET cypher video below!

Marshall Mathers is on Fire

Everyone was at the edge of their seats when DJ Khaled, host of the BET Hip Hop Awards 2017, hinted that Eminem would drop by the stage. When he did though, he lyrically annihilated Donald Trump. In a four-and-a-half minute freestyle, he skewered the Commander-in-Chief for everything and more.

Em slammed Trump on building a wall, immigration, gun control, the NFL, and so much more! He even name-dropped Colin Kaepernick and Barack Obama and made a subtle reference to Senator John McCain in the freestyle he named “The Storm.” And he even went after Trump for picking Steve Bannon as chief strategist!

Filmed in his hometown of Detroit, Eminem rapped, “Now, if you’re a black athlete / You’re a spoiled little brat / For tryna use your platform or your stature / To try to give those a voice who don’t have one.” He even raised a fist in the air, a gesture in support of Kaepernick.

Mathers was on freestyle fire that his fans are sending him burning emojis in support. But really, it was the president who got burned as Em belted out, “This is his form of distraction/ Plus, he gets an enormous reaction/ When he attacks the NFL, so we focus on that/ Instead of talking about Puerto Rico or gun reform for Nevada/ All of these horrible tragedies and he’s bored and would rather cause a Twitter storm with the Packers.”

This isn’t the first time the Grammy Award winner has burned the president in a single breath. A year ago, he released “Campaign Speech” targeting Trump supporters, and in February, he collaborated with Big Sean on another lyrical diatribe against the POTUS.

me going to bed excited for Trumps response and news reports of Eminem’s ICONIC cypher ?? pic.twitter.com/VyA81pWqPF

Eminem even tossed up a verse on Trump’s feud with Senator John McCain rapping, “He says, ‘You’re spittin’ in the face of vets who fought for us, you bastards’ / Unless, you’re a POW who was tortured and battered / ‘Cause to him, you’re zeros / ‘Cause he don’t like his war heroes captured / That’s not disrespecting the military.” The lines referenced a previous tweet from Trump where he questioned whether or not McCain is not a hero, when he said, “I like people that weren’t captured, OK?”

Eminem walkin out wit his crew after that cypher #HipHopAwards pic.twitter.com/sus1SyKdoO

While people are anticipating Trump taking to Twitter (as usual), Eminem’s fans are fired up by his no-holds-barred cypher video. The response on Twitter was just as passionate. While GIFs are flooding Twitterverse to show Eminem was on literal fire, some are hilariously speculating Trump’s reaction. Some are betting that VP Mike Pence would have to forego NFL duty for one of Eminem’s concerts, and others are imagining a worried White House staff. Even Kaepernick and Snoop Dogg applauded Eminem for the track!

Eminem fans who are Trump supporters received a powerful message from him. “And any fan of mine who’s a supporter of his/ I’m drawing in the sand a line/ You’re either for or against/ And if you can’t decide who you like more and you’re split/ On who you should stand beside/ I’ll do it for you with this,”  he rapped, as he punctuated the line with a one-finger salute.

While Twitterverse would excitedly go to bed with an anticipation of waking up to a Trump tweet, Eminem’s message is clear. “The rest of America stand up. We love our military and we love our country, but we f***ing hate Trump.” Now, should we expect Trump to challenge Eminem to a rap battle?

Check out the Eminem’s BET Hip Hop Awards cypher video below and fire away in the comments below!