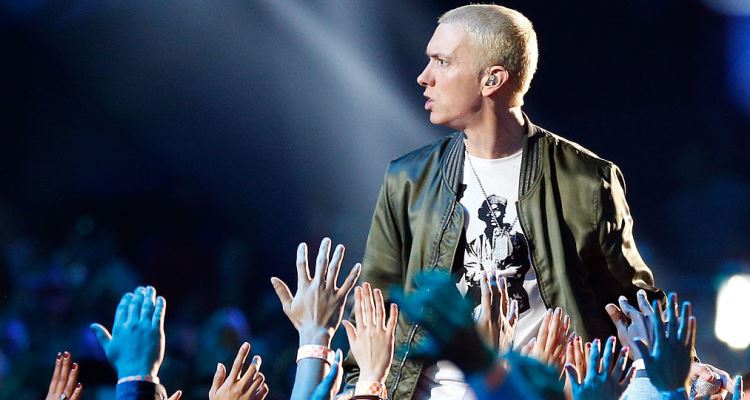 With the MTV Video Music Awards on the way, people are wondering who will break history by winning the top category three times! Eminem, or Marshall Bruce Mathers III, was the first artist to win the top category twice, and now Rihanna could possibly beat his record. If you’re wondering what’s the scoop with Eminem now, here’s what you need to know!

The rapper prevailed in 2000 for his song “The Real Slim Shady,” and won the top category again in 2002 for “Without Me.” Unfortunately for him, he hasn’t since made a song that would give him a hat trick. Eminem has been out of the spotlight for a while, and even on social media, he does not post often. It’s no wonder people are asking questions like: What does Eminem look like now? Where is Eminem now? What is Eminem doing now? Well, he may not be posting daily selfies on the ‘gram, but he has been busy. Here are a few things on the radar for Eminem in 2017.

Eminem has been working with a few other artists lately on collaboration tracks, and one of them will be released soon! Senior Vice President of Programming at iHeartMedia Michigan, Tony Travatto said that the “rap god” is teaming up with Pink again for a new song. “Mojo in the Morning” hosts revealed that the new track will be “unbelievable” and that it would be coming out “very soon.” This isn’t the first collaboration between the two experienced artists. Back in 2010, they worked together on the song “Won’t Back Down,” so those who enjoyed that track should get excited for new music magic from the duo!

Pink isn’t the only artist that wants to work with the “I’m Not Afraid” rapper. DJ Khaled recently listed off some artists he wants to team up with some day, and the list includes Eminem, Dr. Dre, and Adele. That would be something to look forward to!

It feels like forever ago that Eminem teased his new album, but it’s only been a year and by the looks of it, fans may soon get a taste of new music from the real Slim Shady! Eminem’s new album would be his ninth, and with the new collaboration tracks on the way, fans are curious as to what direction his new music will take. Almost every album from the “My Name Is” rapper is unique from the previous, so it would make sense that the upcoming album will be unlike anything we’ve heard before. The rumor is that the album will launch this fall, and since promotions and singles are releasing now, that rumor could be true! While the public hasn’t been able to preview the album, several music personalities have claimed to have heard some of it. Rapper 2-Chainz said he heard a song and found some aspects that reminded him of his own music style. Fans of Dr. Dre will be happy to know that he is reportedly producing a track for Eminem’s ninth album, as well! Rumor has it that Rick Rubin and Fred Wreck are also working behind the scenes in production.

It’s been over a decade since Eminem was on the big screen, except for that time he made a cameo in The Interview (2014). He first showed off his rap skills in the 2002 film, 8 Mile, and now he’s back, working behind the scenes for an upcoming battle-rap comedy film called Bodied. He will be working alongside the renowned music video director, Joseph Kahn. There’s not much known about it just yet, as the creators have remained tightlipped, but the word’s out that the film will premiere this September at the Toronto International Film Festival (TIFF). Bodied is a rap satire that deals with topics like race relations, and will include acts like Loaded Lux, Dumbfounded, Dizaster, and Hollow Da Don.

Well, that’s the scoop on Eminem today! Stay tuned to find out more updates about the artist in the weeks ahead! (And hopefully, we’ll have our hands on some of his new music by then!)