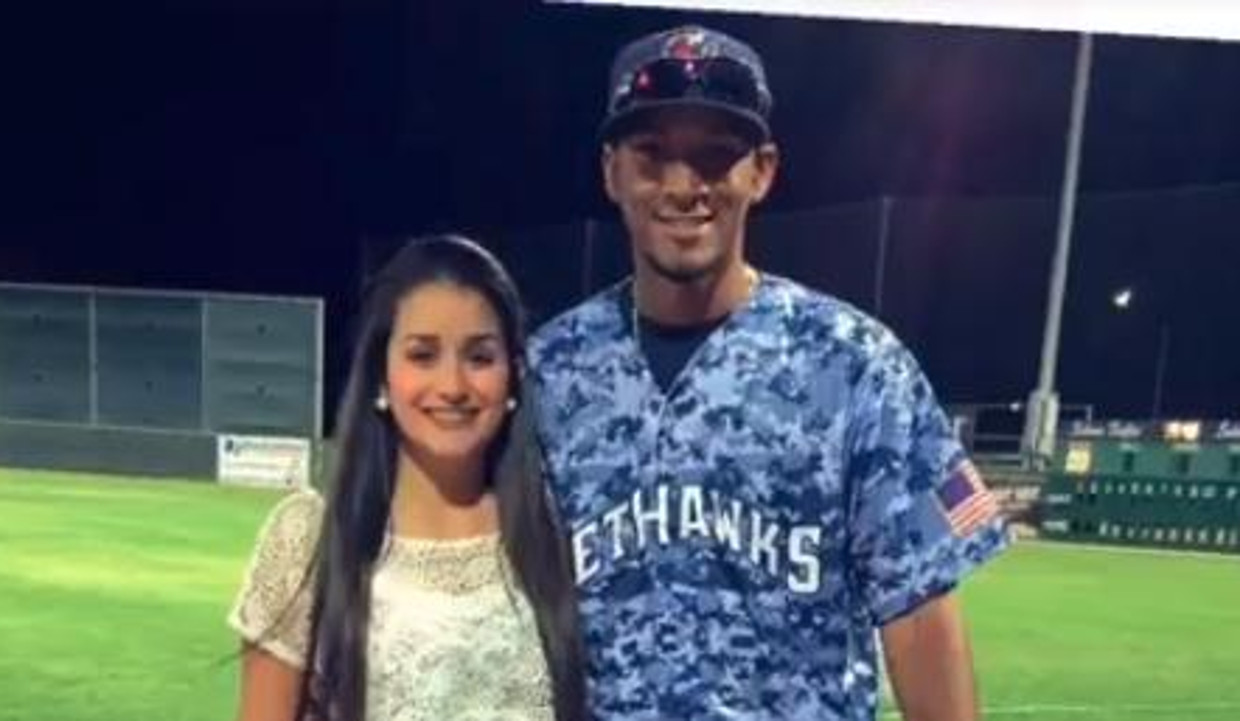 Yesterday, a shocking and disturbing video was released that shows professional baseball player, Danry Vasquez beating up his girlfriend, Fabiana Perez. The attack was caught on a stairwell security camera at a Texas Stadium back in August 2016, when the incident originally occurred. After seeing the jaw-dropping footage, everyone wants to know who Fabiana Perez is.

The video released by KRIS-TV was captured more than a year ago. At that time, Venezuelan Danry Vasquez was looking at a shining career with the Houston Astros. Vasquez began his baseball career with the Detroit Tigers in 2010.

Danry Vasquez and his girlfriend, Fabiana Perez Wadskier, have reportedly been dating since they were teenagers. Here’s what you need to know about the couple and their volatile relationship.

Vasquez’s attorney, Les Cassidy, said in an interview that they have been exchanging text messages since the video was released.

Cassidy said that Vasquez is ashamed of what happened. He also added that the couple in the video shared a relationship for a long time before that assault took place.

“In this situation, the two people involved were very young, they’d been together as boyfriend and girlfriend since he was 16 and she was 14, in Venezuela,” Cassidy said.

The atrocious behavior Vasquez showed towards his girlfriend got him terminated from the Houston Astros. He was immediately sent packing back to Venezuela.

But maybe a lot has changed in a year? On Instagram, a video is going viral where Vasquez and a woman are seen on a beach with their friends. It shows Vasquez’s surprise proposal, where he got down on one knee with a ring box in his hand. According to TMZ, the girl in the video is Fabiana Perez, the same girl he was seen beating in the stairwell in 2016.

However, TMZ has also reported that even though it was Perez in the video and the two did get engaged that day, the couple have since split and Vesquez is reportly married to a new woman!

In an interview also cited by TMZ, Vasquez explained he is married to a new woman.

He said, “I am currently married, and not with the girl with whom I had the incident.”

He further added, “I respect, value and love my wife. She has supported me in all this and has been an unconditional person in this matter. I also know that those scenes were strong. As a public figure, I must set an example. Today I apologize and show that this should not be done. I know that stronger comments come and I leave everything in God’s hand.”

What Did Fabiana Perez Do for a Living?

Fabiana Perez reportedly worked at the Miami International Mall as a brand associate with the clothing retailer, Old Navy. She was also named Brand Associate of the Month, in which the company wrote that she was “a great model of Old Navy Standards.”

However, since the release of the video, it has not been confirmed if Perez is still at the same job. But we do know that she lives in Miami, Florida.

Danry Vasquez was around 22 years old when he violently thrashed his girlfriend, punched her in the face, dragged her down the staircase, and slapped her on the head.

Cassidy explained that Vasquez was a young man at the time and that he later learned to “control his temper.”

The attorney added, “There were things going on in their lives at the time and he’s better with coping with it now.”

Vasquez was put through a pretrial diversion program that helps young first-time offenders realize the gravity of the situation. He took online classes as ordered by the court, which Cassidy said helped him a lot.

You can see the disturbing video where Fabiana Perez was beaten by Vasquez below. WARNING: It is graphic.


Where Are Danry Vasquez and Fabiana Perez Now?

Not only is the video going viral on Twitter and Instagram since its release, but social media users are verbally attacking Danry Vasquez for his behavior now, too. This can of worms has been reopened, and Vasquez is hearing it all over again.

@gobarnstormers danry Vasquez is a piece of shit for beating that woman. No matter the reason you don't beat a woman like that…Tell him to meet me in the stairwell and try shit…

The video was released in 2018 because it was apparently under lock and key all this time, as there was an ongoing criminal investigation into Danry Vasquez and his family. But now, it’s been released through an open records request.

The Lancaster Barnstormers released a press statement on their Facebook page. They have terminated their outfielder, Danry Vasquez, after the video was released.

Fabiana Perez, on the other hand, has opted to stay under the radar this time, as well. She was against the release of the video in the first place and she did not even want to press charges at the time. She has not come out to make any formal statement regarding the matter.