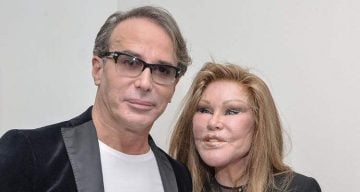 Socialite Jocelyn Wildenstein and her fiancé, Lloyd Klein were arrested for domestic violence. In a bizarre fight that started after an oven plate broke, the couple’s argument turned physical, leading them to be cuffed and taken into custody.

Jocelyn Wildenstein’s plastic surgeries have been a topic of discussion for years. Now, the socialite is back in the news for domestic violence. She accused her fiancé, Lloyd Klein of pushing her, bruising her arm and neck after which she went to a nearby hospital for treatment. Klein was also hospitalized after reportedly sustaining lacerations on his forehead. Take a look at some of Jocelyn Wildenstein’s before and after surgery pictures, and learn more about her right here!

#2. The Divorce That Made Her Rich

Alec Wildenstein was caught cheating on his wife, which led to a money-strapped divorce settlement of $2.5 billion, and $100.0 million a year for 13 years.

#3. Surgeries That Cost a Fortune!

Jocelyn Wildenstein maintained her wealthy socialite status for a long time, and has reportedly spent $4.0 million in achieving her purr-fect feline look.

For Wildenstein, life changed for the better when she met Swiss film producer, Cyril Piguet when she was 17. From there, she lived with filmmaker Sergio Gobbi in Paris, and money has never been a concern since.

Desparetly looking for Jocelyn Wildenstein contact, someone can help?#jocelynwildenstein #leopard

She began dating Lloyd Klein in the early 2000s. The couple announced their engagement this year, with Wildenstein showing off a gigantic diamond ring. The couple have not announced a wedding date, but after their recent arrest, people are wondering if the engagement is still on.

Jocelyn Wildenstein is reported to have a net worth estimated at $500.0 million, most of it coming from her highly publicized divorce. Even though she has a lavish lifestyle and has spent millions on plastic surgery, none of it is breaking the break for this wealthy woman.

Which jocelyn wildenstein are you today #jocelynwildenstein #surgery #icon #love