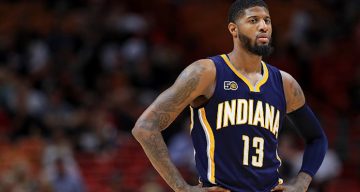 A feud brewing in the NBA has spilled onto social media. Daniela Rajić, Paul George’s girlfriend and baby mama, is feuding with Damian Lillard’s sister after George and Lillard themselves took jabs at each other on social media. Though the initial period of their relationship had more lows than highs, Rajić and George are stronger than ever. As Rajić has proven, she has her man’s back. This Daniela Rajić wiki elaborates more on their relationship.

Daniela Rajić was born on November 12, 1990 to Violeta Rajić. Daniela and her sister, Kristina, have Serbian ancestry and were raised in Queens, New York.

Happy bday woobie ❤️ you know what you mean to me and how much I love you! Your young ass finally caught up 😂 lol.. I’m excited to see what’s in store for you thru year 28. Happy to call you my baby! Happy bday love ❤️ @danielarajic

Violeta still calls New York her home, but she also spends time with her daughter and grandkids. Kristina graduated from Barry University’s Physician Assistant Program in Florida in 2020.

Daniela Rajić moved to Florida where she attended the University of Miami. Back then, she also worked as a stripper.

She used to be a stripper at the famous strip club, Tootsies, in Miami. She used the money she earned from dancing to support herself through college.

Now she collaborates with Sarah Patterson, the wife of L.A. Clippers’ player Patrick Patterson, to run their swimwear brand, Nude Swim. The NBA WAGs bonded when their respective partners were teammates on the Oklahoma City Thunders. And in 2019, they became business partners with the launch of Nude Swim.

Tootsies is a famous club in Miami that was frequented by athletes and celebrities. Rajić met several famous names when she was a dancer there, including Paul George.

They reportedly began dating in 2013 and are still together. But their relationship was not without ups and downs.

Daniela Rajić filed a lawsuit against Paul George less than a year into their relationship. She was pregnant with their first child when she accused George of offering her $1.0 million to get an abortion.

Rajić refused and gave birth to their daughter, Olivia George, on May 1, 2014. A paternity test after Olivia’s birth confirmed that Paul George is the father.

However, George would counter Rajić’s accusations by filing for full custody of their daughter. After a legal battle, they agreed to a joint parenting agreement and child support settlement.

They were not dating during this bitter phase. However, they would rekindle their relationship and welcome a second daughter, Natasha George, on November 1, 2017.

Rajić and George are still going strong as they raise their daughters together. There were rumors of an engagement last year but there’s no confirmation if they are walking down the aisle anytime soon.