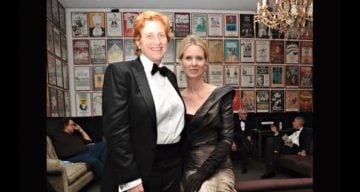 To all Sex and the City fans, Cynthia Nixon will always be Miranda Hobbes, a lawyer in New York City. The actress recently announced that she would be running for governor of New York City, which has pretty much brought the reel and real world together! Nixon and her wife, Christine Marinoni, are strong LGBTQ activists. Now that she’s going to be in the public eye, many are curious to know who Cynthia Nixon’s wife is. Keep reading to learn all about her!

Christine Marinoni embraces her past, which is what has helped shape her today. She has been an activist for the LGBTQ community since the mid-‘90s and she’s here to make a difference. Will her relationship with Cynthia Nixon give the latter an advantage over her opponents in the race to be the Governor of New York?

We have to wait and see. But until then, here’s everything you need to know about Nixon’s wife with details from Christine Marinoni’s wiki.

Christine Marinoni, 50, started seeing Cynthia Nixon in 2004. The TV actress was previously married to Danny Mozes and also has two children with him; Samantha and Charles Mozes.

Nixon and Mozes split up, after which she realized that she was bisexual. She and Marinoni began dating shortly after, but Nixon had never been with another woman before.

Eventually, Marinoni and Nixon got engaged in 2009. The couple made the announcement at a same-sex rally they were involved in.

Nixon described Marinoni as a “short man with boobs.” She said that the most striking feature of her partner is her butchness!

“Christine would probably kill me for saying this, but my daughter said one time that if you really had to break this down, [it looks like] she would be butch and I would be femme…but really once you get to know us it’s really the opposite,” Nixon said.

Christine Marinoni apparently played a big role in helping Nixon with taking things on the “lighter side.”

Nixon and Marinoni tied the knot on May 27, 2012. They were legally married in the state of New York a year after they welcomed their son, Max Ellington Nixon-Marinoni.

It was reported that Nixon chose a green wedding dress for the occasion, which was designed by Carolina Herrera.

A post shared by Every Lesbian & Their Fashion (@everylesbianandtheirfashion) on Jun 8, 2017 at 7:16am PDT

What Does Christine Marinoni Do for a Living?

Christine Marinoni came out as a lesbian in 1995, and she opened a lesbian café/bar in Brooklyn.

Since then, Marinoni has had the chance to associate with many people from the community and otherwise. She has even helped raise awareness for those who have been affected by hate crimes in the community.

One of her bartenders was once attacked, and Marinoni’s conscience was shaken. She wanted to do something for the people who suffered from hate crimes, so she and some other people organized rallies and protests to bring attention to the matter.

Marinoni wanted to break all barriers that came with the LGBTQ labels. So, when she began dating Cynthia Nixon and wanted to marry her, she took action to make same-sex marriage legal.

“So she and I did some lobbying in New York state and we went up a few times to Albany and met with legislators and talked to them about passage of gay marriage in New York City,” Marinoni revealed in an interview.

Christine Marinoni is an educator. She most recently held the position of a senior advisor for community partnerships at the New York City Department of Education but resigned two weeks ago.

Marinoni is a career community and labor organizer with a will to see that everyone, regardless of their sexual orientation, is seen as an equal citizen.

Also Read: How Rich Is Proud Lesbian Ellen Degeneres in 2018?

So far, Cynthia Nixon’s announcement on Twitter about running for governor has received plenty of positive reactions!

Some sources say that the numbers are also in favor of Nixon, with 20% of New Yorkers favoring her. And among Democrats, 26% have a positive view of her.

Nixon, a Democrat herself, has a lot of work ahead of her, as Governor Cuomo is also a popular man in New York. She has to put together some very strong campaign strategies for her upcoming fight.

Will she able to bring about radical changes for the LGBTQ community that she is so passionate about? Will she make it her priority to do so?

Whichever way Cynthia Nixon chooses to go, it’s certain that her wife, Christine Marinoni, will stand by her side.