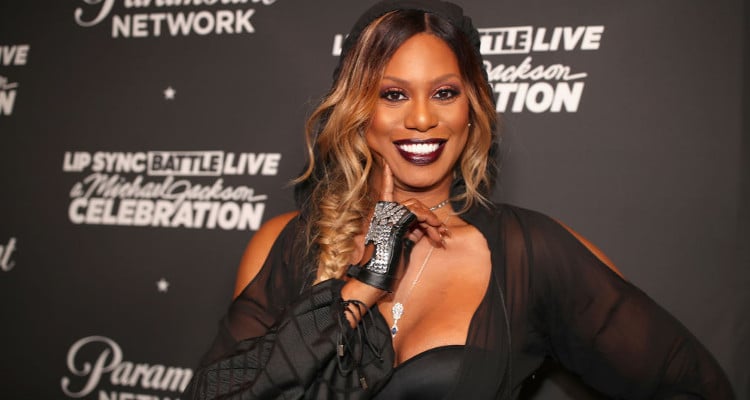 A new season of Lip Sync Battle began Thursday with a number of stars set to perform and take home the belt. This season, Orange Is the New Black actress, Laverne Cox joined Neil Patrick Harris, Taraji P. Henson, and Hailee Steinfeld in the Michael-Jackson-themed special. She is a prominent LGBTQ advocate, but many still wonder if Laverne Cox is transgender. Keep reading to find out more about the actress.

She absolutely owned the role as Sophia Burset in Netflix’s Orange Is the New Black, making everyone take notice and ask, who is Laverne Cox?

Known as one of the most influential transgender people in the business, Laverne Cox is an Emmy-nominated actress, award-winning television producer, and a fierce activist for LGBTQ rights.

We have everything you need to know about this actress who is making her mark in Hollywood.

Growing Up Transgender in the Deep South

Laverne Cox was born Roderick Laverne Cox on May 29, 1972, in Mobile, Alabama. She was creative from a young age and loved to dance. Her mother enrolled her in tap and jazz classes, but thought that “ballet was too gay.”

Cox was bullied by her classmates and harassed by teachers for identifying as a girl. The bullying intensified when she hit puberty and began to develop romantic feelings towards her male classmates.

In an interview with TIME magazine in 2014, Cox recalled one of the many instances where she was bullied by the kids in her school:

“They couldn’t really bully me on the bus because the bus driver could see in the rearview mirror, and that wasn’t allowed. But the second we got off the bus, they would try to beat me up. So, I’d have to start running, immediately. So that day I was running for my life, basically, and four or five kids caught me. They were in the band. And I remember being held down and hit with drumsticks by these kids.”

Cox remembers a time when her third-grade teacher told her mother that, “Your son is going to end up in New Orleans wearing a dress.”

She went to a therapist, and had “the fear of God being placed in me,” she explained.

Cox even admitted that she attempted suicide by swallowing pills when she was 11 years old. Thankfully, she only ended up with a bad stomach ache.

Transformation on Orange Is the New Black

Cox went on to attend the prestigious Alabama School of Fine Arts in Birmingham, Alabama, where she studied creative writing.

I just wanted to send a message to all the young people I met at #transformingfamily today saying thank you for being you and for inspiring me to be more myself. Thanks to all your parents who have given you at the very least permission to be a part of a goup I wish I had when I was a teenager. I didn't take any pictures out of respect to the group's confidentiality. But I just wanted to send you and trans kids everywhere a whole lotta love. ✊✊✊✊????#TransIsBeautiful

This was a role that showed her real transformation from who Laverne Cox was before, to who she is now. Laverne Cox’s twin, M Lamar played Sophia before her transition.

Cox went on to appear in a number of shows, including The Mindy Project, Doubt, and Law & Order. She also won an Emmy as an executive producer for Laverne Cox Presents: The T Word.

It's almost time to join the #FreakShow? See #FreakShowMovie tomorrow in theaters and on demand! Tickets: [link in bio] @freakshowmovie #TransIsBeautiful

Laverne Cox’s surgery helped her in her transition, but the actress has said that she will never change the way her face looks.

“Years ago, I wanted really highly invasive surgical procedures to feminize my face. All these years later, I have the money to do it, but I don’t want it. I don’t want it! I’m happy that this is the face that God gave me, and it’s imperfect,” she said.

Everyday is another opportunity to start over, to heal more, to love more, to be of service more. #TransIsBeautiful

The Queen of Lip Sync Battle

Laverne Cox’s Lip Sync Battle performances are legendary! Last time she was on the show, she killed it with her impersonations of Beyoncé and Nicki Minaj!

From Alabama to the shiny lights of stardom, Laverne Cox is an inspiration to us all, as she trailblazes her way through Hollywood and continues her fight for equal rights. This talented and courageous lady is definitely going places!