The race for Hannah Brown’s heart on The Bachelorette is heating up with the Fantasy Suites episode. After this week, pilot Peter Weber appears to be a frontrunner. But outside of the show, a new drama has struck Bachelor Nation. After all the hoopla surrounding Jed Wyatt’s alleged ex, now Peter’s involved in alleged ex drama, too. Peter’s alleged ex-girlfriend, Calee Lutes, has come forward claiming that he dumped her to go on the show for fame. Who is Peter’s alleged ex? Here’s everything on this Bachelor Nation drama in Calee Lutes’ wiki.

Calee Lutes’ Is from Georgia

Saw someone familiar in the @abercrombie newsletter this morning. #happybirthdaytome #23 😁🎉

Calee appears to be based in Atlanta now. She met Peter Weber when he was in Atlanta for training.

“Peter and I met through a dating app in June of 2018,” Lutes told ET. “I live in Atlanta, and he lives in L.A. He had just been hired by Delta, so he was in Atlanta for a month for training. We hit it off and decided to continue dating long distance after his month was up.”

Lutes Is a Model

The 5’8” beauty is a model based in Atlanta. She is signed with Wilhelmina LA, NEXT Miami, and UWM Atlanta.

Judging by her Instagram, she’s been modeling since at least 2014. She went from doing bridal features in local magazines to international modeling. That also includes a photo shoot for a German magazine with Keith Carlos, America’s Next Top Model’s first male winner.

Shot an editorial for a German magazine today in LA! 🌸 #antm @brigittemagazin @keithcarlos

Lutes Says She and Weber Were in a Serious Relationship

According to Lutes, her relationship with Peter Weber was going smoothly. Despite their long-distance relationship, they met often and vacationed together around the U.S. and in Switzerland in November 2018.

“We were very serious. He told me he loved me for the first time in October, and we talked almost every time we saw each other about how we were going to make it last long term. He wanted me to move out to L.A. to be with him, and he wanted us to get an apartment together. I was open to moving out there for a year or so, to give our relationship a fair chance, but he told me he didn’t want me out there temporarily … he wanted me out there ‘forever.’ We also talked about kids,” said Lutes, adding that they spoke about all of this right up until he broke up with her.

She also claims they met each other’s families very early in their relationship. Lutes allegedly met Weber’s family in August when he invited her on a family vacation in New York.

Lutes even provided screen grabs of text exchanges between her and Weber, as well as photographs.

Weber Allegedly Broke Up with Lutes to Come on The Bachelorette

Lutes detailed the breakup in the ET interview, saying that their relationship was going well last December. She was working in Santa Barbara for a few days then, and Weber drove up for a visit, allegedly speaking to her about them settling in Santa Barbara together.

He flew to Atlanta a week later, and the two spent time there together before he returned to L.A. Lutes claimed that was the last time they saw each other, though they continued to speak to each other for a week. She even prepared to spend New Year’s with him in L.A.

However, a couple of days before Christmas, Weber allegedly broke up with her over FaceTime with no clear reason. Lutes said she was “devastated and completely blindsided” by the breakup.

She wanted to know why he dumped her and looked through his Instagram for any clues. She noticed the producer of The Bachelorette had followed him, but didn’t think anything of it at the time.

Following their breakup, Weber allegedly purged all traces of Lutes and their relationship from his social media accounts. Even going as far as deleting their comments on each other’s posts and unliking her posts.

Happy Father's Day to my hero! I love you more than words can explain! You taught me how to drive, shoot/clean a gun, fish, everything I could possibly learn about racing and cars, and to not be scared of a little dirt. I'd be a frilly girly girl if it weren't for you. Phew. @fasttracksims

They kept in contact with each other even after their breakup—up until March, when filming for The Bachelorette began. Interestingly, Haley Stevens, who is Jed Wyatt’s alleged ex, claimed she had been in contact with Wyatt until March as well.

She found out Peter was on the show when ABC released the list of contestants. Lutes’ cousin saw that Peter was vying for Hannah Brown’s affection and immediately told Lutes.

“He absolutely betrayed me. He interviewed for a reality dating show while simultaneously planning a future with me.” She added that multiple other woman reached out to her claiming that Peter was seeing them too while he was dating Lutes.

Lutes says he was never upfront about trying out for the show, though he knew she watched it regularly. During one of her trips to L.A., she says, he also showed her the Bachelor mansion.

She Believes He Referenced Their Relationship on The Bachelorette

When Peter first appeared on The Bachelorette, he mentioned he was left “devastated” by a recent breakup and that it “wasn’t meant to be.” His family expressed the same sentiment during Hometown Dates.

Lutes believes he was referring to their relationship, but says they only broke up because he wanted to be on The Bachelorette. “He definitely didn’t go on the show for the right reasons. I believe he went on it for the chance at fame, and he got what he wanted.”

When asked about what his family had to say about his last relationship, Lutes said, “I was his last girlfriend, so it had to have been about me. It was shocking to hear that. It made me wonder if he told his parents that I broke up with him, instead of the other way around. If his parents do know the truth, then maybe he really did have a hard time letting go of a good thing to chase fame instead.”

Peter is currently a frontrunner, and Lutes says she understands his charm. Before this scandal, Bachelor Nation hoped he would be the next Bachelor if Hannah doesn’t give him the final rose. But Lutes doesn’t think he deserves to be the Bachelor.

Lutes has now moved on to a new relationship and is happy with her new boyfriend. She was initially hesitant to speak out after seeing the backlash Haley Stevens got for revealing her alleged relationship with Jed.

Both Peter and Jed are favorites in the competition for Hannah’s heart. Whether their alleged relationships will change the result after the Final Rose is unknown. Here’s hoping the topic of alleged exes comes up on the Men Tell All special on July 22, on ABC.

Celebrity Wiki
Blake Horstmann’s Wiki: Facts to Know about “The Bachelorette” Contestant with the Horse 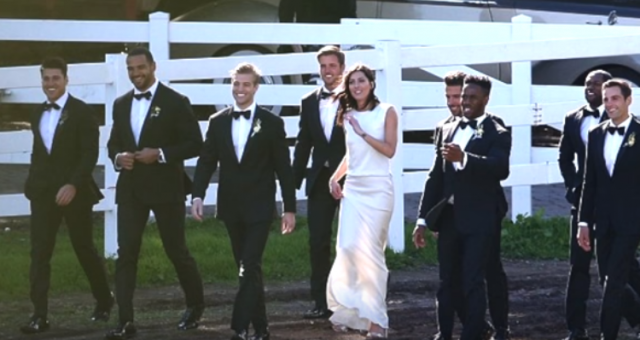