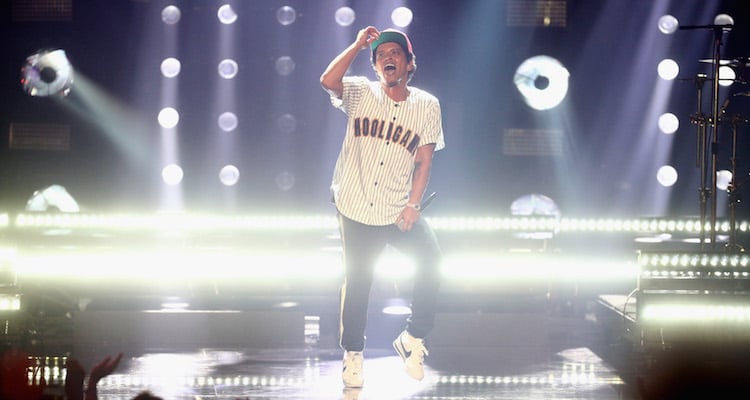 Since the end of March, Bruno Mars has been on his 24K Magic Tour. Seven months in, and he’s not even halfway through! The singer will wrap up his international tour on July 14, 2018, so there’s still plenty of time to grab tickets! For more on Bruno Mars’ 2017 tour, with more details on the dates and where to buy tickets, we’ve got you covered!

When Bruno Mars announced his 2017 tour last year, over one million tickets were sold on the first day alone. What was originally supposed to be an 86-date tour, now has over 160 shows all over the world! With added venues, Bruno Mars’ tour dates increased, and tickets are still available in select cities.

If you want to know where you can check out details about the singer’s 24K Magic Tour and schedule, you came to the right place.

Currently on the North American leg, Bruno Mars’ 24K Magic Tour will head over to New Orleans this weekend, making its way to L.A. before going to Brazil for November 18. But the “Treasure” singer will be back in the U.S. just in time for the holidays, with shows in Washington just before Christmas, and Nevada on New Year’s Eve. With stops in Mexico, New Zealand, and Australia, Bruno Mars’ tour ends on July 14, 2018, in London, England.

The singer took time out of his schedule last weekend to perform a bilingual version of his hit “Just the Way You Are” at the Puerto Rico benefit concert, One Voice: Somos Live! A Concert for Disaster Relief. He was part of a lineup of big names, which included Mark Anthony, Jennifer Lopez, Stevie Wonder, and Jamie Foxx.

Proceeds from the show went to relief efforts by Feeding America, Save the Children, Habitat for Humanity, Unidos for Puerto Rico, United Way, and UNICEF to help the victims of hurricanes Irma and Maria.

Anticipation was high for the release of Mars’ third studio album, 24K Magic. Especially after its titular single dropped over a month before the album did. With two more singles—“That’s What I Like” and “Versace on the Floor”—being released in 2017, fans who didn’t already buy the album finally realized that the four-year wait for new Bruno Mars music was well worth it! Many critics noted that 24K Magic had a “James Brown-style throwback” vibe to it.

Entertainment Weekly commented about the album and said, “There’s not a single kick drum or bass lick out of place, and his arsenal of vintage synths could make even the Stranger Things composers jealous. That level of attention to detail can often lead to self-indulgent albums, but Mars shows restraint in other ways. With only nine songs, there’s not an ounce of fat on Magic, and nearly every track sounds like Top 40 gold.”

Good news! Tickets are still on sale for the 24K Magic Tour! So, if you want to check out availability and see when the “Too Good to Say Goodbye” singer will be in a city near you, click here.

Although there’s no confirmation which songs are on Bruno Mars’ tour setlist, the singer’s site has a link to a Spotify playlist for fans “to get prepared for the show.” Also, there’s no news yet on whether Mars will be getting some recording done while on tour, but it’s really unlikely that he’ll do so.

Mars’ “meticulous if not obsessive” approach to writing and recording music is obviously appreciated by fans. But that doesn’t mean we can’t help but want more from him—and soon!

In the meantime, we’re happy to catch Bruno Mars on tour and hope that he heads right back to the studio next summer.

How Happy Is This Guy? ?#24kMagicWorldTour