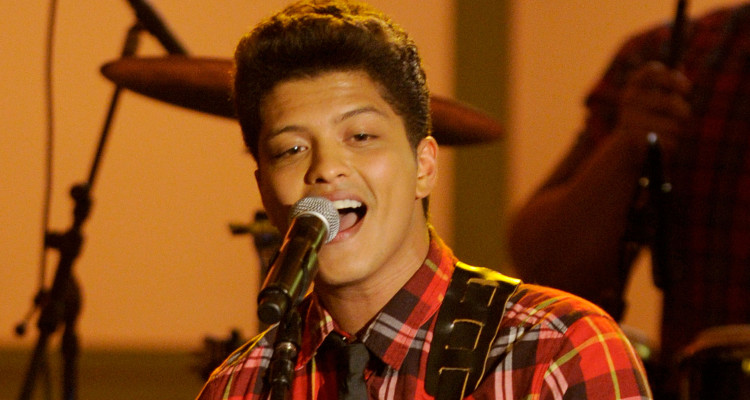 Bruno Mars’ songs have been buzzing on the charts since his debut in 2004. He is a favorite to many and some of his songs could even be considered all-time hits. Though he lost out to Kendrick Lamar for both Artist and Video of the Year at the MTV VMA’s last night, fans are hoping he has better luck at the Grammys. Read on to check out our list of Bruno Mars’ best!

Originally known as Peter Gene Hernandez, Bruno Mars is a well-known singer-songwriter, record producer, multi-instrumentalist, and a choreographer. He created magic with his music time and again making it almost impossible for fans to label the best Bruno Mars songs. For over a decade, people have been humming his music, and it’s hard not to when they’re just so damn catchy! It’s tough to decide which ones are his best, but we think we’ve come up with one of the best Bruno Mars songs lists. Check out which ones made the cut below!

“Just the Way You Are”

This song was Bruno Mars’ debut solo single and played the lead in his album, Doo-Wops & Hooligans in 2010. There was no better way for him to emerge as a songwriter than with this song. In 2011, it won him a Grammy Award for Best Male Pop Vocal Performance and further soared at number one on the Mainstream top 40 charts and the Billboard Top 100. In other countries, it made it to top-five lists. If there has ever been a time when Bruno Mars’ lyrics have captured millions of hearts, it was with “Just The Way You Are.”

If there was ever a Bruno Mars song that you just couldn’t help but shake it to, it was “Uptown Funk.” Regardless of age and taste, everyone was addicted to this jam. Ranking number 1 for 14 consecutive weeks, it won the Record of the Year at the Grammy’s in 2016. This was Bruno Mars’ first win at the event, even though he was nominated four times earlier.

Much talked about, this song was performed by Bruno Mars at the Super Bowl XLVIII Halftime Show and the 54th Annual Grammy Awards. It peaked the charts in a lot of countries across the world, owing to which Mars enthusiastically chose to perform it on The Doo-Wops & Hooligans Tour, The Moonshine Jungle Tour and on The 24K Magic World Tour.

Released in 2009, as a part of his album B.o.B Presents: The Adventures of Bobby Ray, “Nothing On You“ made Bruno Mars a star almost instantaneously. This southern rap ballad topped the charts in the United Kingdom and the United States, while it made it to the top-five list in Australia and New Zealand.

Played at almost every wedding, “Marry You“ became extremely popular when the cast of Glee decided to cover it. It received generous reviews and charted within the top 15 in most international markets, making it to number 8 in Australia, number 10 on the Canada Hot 100, number 11 in the United Kingdom, and to the top five in New Zealand.

With sales of approximately 6.5 million copies in 2011, it was one of the best-selling digital singles. Owing to its popularity and success, Mars sang it on  American Idol. He also performed it on The Doo-Wops & Hooligans Tour in 2012.

This song was on the soundtrack to the infamous The Twilight Saga: Breaking Dawn-Part 1. With different emotions instilled in the song, it was a hit among Twilight fans who could feel the heartbreak in the lyrics. “It Will Rain” brought Mars to the forefront as a successful soundtrack writer.

In the list of Bruno Mars songs 2017, “That’s What I Like” has everything needed to top the charts. A perfect blend of peppy vibes and catchy lyrics, this song showcases Mars at his very best. It reached number one on the Billboard Hot 100.

“Locked out of Heaven”

Making it to the top 10 in over 20 countries, “Locked out of Heaven” proved to be an undeniable hit. The song is an eclectic mix of funk, reggae, and new wave. Bruno Mars went on to perform it on various occasions, including famous television shows such as Saturday Night Live and The X Factor. He also included it on the 24K Magic Tour and The Moonshine Jungle Tour.

“Versace on the Floor”

Mixed by David Guetta, a version of this song was made available worldwide in June 2017. This mix heavily impacted radio stations across the United Kingdom and emerged a hit. Owing to its 1990 feel, this song has succeeded in capturing hearts all across the globe.

Bruno Mars has inspired an entire generation with his music and lyrics. He is one of the few youngsters who rose to fame purely on the basis of talent and effort. He has found his place in the hearts of his fans. And yes, “When he smiles, the whole world stops and stares for a while.”