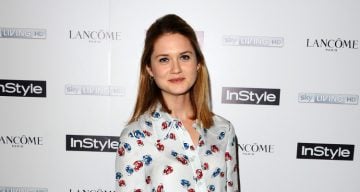 When we think of J.K Rowling‘s wizarding world, we think about the main trio of heros. But what about Bonnie Wright? Where is Ginny Weasley now? Keep reading our Bonnie Wright wiki to find out!

In a nutshell, 26-year-old Bonnie Wright has been busy doing pretty much everything. From graduating with a Bachelor of Arts to directing films, Wright has kept herself busy. Read on for more updates about the actress.

English actress, Bonnie Wright was born on February 17, 1991 in London, England. She attended Prior Weston Primary School and later King Alfred School in North London. She then went on to study film and television at University of the Arts: London College of Communication and graduated in 2012 with a Bachelor of Arts degree.

The 26-year-old comes from a business family, as her parents own Wright & Teague, a jewelry company. She has an older brother named Lewis.

Wright has an estimated net worth of $12.0 million, amassed through her professional career and her production company, Bon Bon Lumiere.

Bonnie Wright had a brief modeling career, as well. She has a profile with Next Models Agency and won the Most Edgy Look Award at the 2011 Rodial Beautiful Awards. Wright has also walked in London Fashion Week for designer Katie Eary in the fall of 2011.

After excelling on screen and paper, Bonnie Wright took a seat behind the camera. She made her screenwriting and directorial debut with her graduation film, Separate We Come, Separate We Go. The film premiered at the Cannes Film Festival’s short film corner and was screened at the BAFTA Graduate.

Wright directed the music video for Sophie Lowe’s “Dreaming,” and directed the short film Know Thyself in 2014. In January 2016, the 26-year-old actress announced her next directorial project, Medusa’s Ankles, an adaptation of the short story by A. S. Byatt.

Bonnie Wright was engaged to English actor, Jamie Campbell Bower in 2011. However, they called off their engagement a little over a year later, stating “It was amicable, but things had not been going right for some time.”

The actress was last reported to be dating nightclub owner, Simon Hammerstein. She is also quite active on social media. Bonnie Wright’s Instagram has a strong fan base with 1.2 million followers! Be sure to check her out!