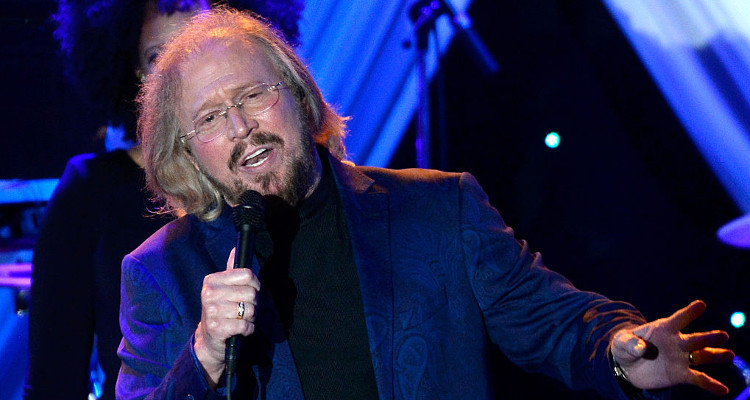 The biggest names in music united for Stayin’ Alive: A Grammy Salute to the Music of the Bee Gees. Barry Gibb, the only surviving member of the iconic music group, performed during the star-studded night.

He is the last surviving Bee Gee, but Barry Gibb is keeping his family’s legacy alive with Stayin’ Alive: A Grammy Salute to the Music of the Bee Gees on CBS, where performed the band’s ‘70s disco anthem, Stayin’ Alive. His voice had become a signature of the three-piece group consisting of the Gibb brothers. When we think of the Bee Gees, we remember Saturday Night Fever, bell-bottom suits, and Barry’s falsetto hooks. After last night’s (April 16) Bee Gees tribute, let’s walk down the memory lane and find out more about the famous Gibb brother in Barry Gibb’s wiki. You’ll also find some nostalgia-inducing family pictures of Barry Gibb, too!

He Spent 2 Years of His Childhood in a Hospital

Barry Alan Crompton Gibb was born in Isle of Man to Barbara Pass and drummer, Hugh Gibb. When he was born, his father was busy earning a living by playing music in hotels, while his mother looked after him and his siblings —twins; Maurice and Robin, their sister, Lesley and the youngest, Andy.

When Barry was two years old, he accidentally dropped a pot of boiling hot tea all over himself. Gibb later commented about the incident saying, “Then the gangrene set in. Because in those days, the advancement of medicine simply didn’t apply to people with bad scalds, so you didn’t have skin grafts, you didn’t have things like that. But this was a particularly bad scald, and I think I had 20 minutes to live at some point.” He added that though he has the scars from the accident, he has no memory of what happened.

Gibb formed a music group with his twin brothers, and they went on to become the biggest commercial and critical hit makers in the history of pop music. Barry Gibb became famous for his voice and songwriting as the Bee Gees churned out hits.

In 2017, with five decades in the music industry, Gibb has a reported net worth of $90.0 million.

According to a New York Times profile, he earns up to $3.0 million a year from the music in their publishing catalog. Gibb currently lives with his family in Miami, with real estate investments between $30.0 million to $50.0 million. His Miami and London mansions are worth a whopping $20.0 million combined. The 70-year-old has released only two solo albums in his lifetime, but he’s riding on the commercial success of the Bee Gees.

Taking you back to '79. Did you see the #BeeGees in your city during their Spirits Having Flown tour? pic.twitter.com/TEzNALia1M

Disharmony Between the Gibbs

It’s not uncommon for bands to have disputes. The internal feud of the Bee Gees, however, went on for years. Barry, Maurice, and Robin had bickered even though they showed the perfect image of a close-knit family. Barry, the oldest, was unhappy with his brothers’ management of their business interests. Their relationship deteriorated to the point that Barry didn’t even know about Robin’s solo album until it was released.

Barry and Maurice shared a better rapport. But when the older Gibb severed ties with the group’s long-time lawyer, Michael Eaton, the twins stuck by Eaton’s side. So, Barry decided to handle his business interests separately from the group. He handed control of his song-publishing business to Warner Music, while the twins remained with the group’s old label, BGM. Many believe Eaton caused the brothers to break up for his personal gain.

Though the brothers became strangers for nearly five years, Barry eventually realized that they’re stronger when they’re together, and they resolved their conflicts to perform again as a group.

He was once spotted out and about with his son Ashley and grandson Lucas. The three men sported the signature shoulder-length wavy locks of the Bee Gees. Ashley Gibb, with a beard identical to his father’s, looked like Barry in his hay-days.

Three heads are better than one. Barry and his sons Stephen and Ashley, collaborators on #InTheNow, out everywhere on October 7.

Being the Last Bee Gee Scares Him

The legendary musician has long outlived most of his family. While his mother passed away last year at the age of 95, he lost his brothers long before that. The youngest Gibb, Andy, was a star in his own right, but died in 1988 at the age of 30, after years of drug abuse. He also has nieces and nephews through his brothers.

After the Bee Gees made a comeback and turned into a touring sensation, Maurice was awaiting surgery for a twisted intestine. But he passed away suddenly of a heart attack at the age of 53. His surviving brothers initially planned to keep the Bee Gees alive and even accepted Maurice’s posthumous awards, they decided to retire the group name.

They briefly reunited when Robin contracted pneumonia and went into a coma. Though he recovered quickly, his health had deteriorated. He was diagnosed with colon cancer a year earlier, which advanced because of his poor health. He passed away in 2012 leaving Barry the only surviving Bee Gees member.

Barry Gibb released his second solo album, In The Now in 2016. He now whips up a storm on tour, but says his touring days are coming to an end because of poor hearing. He said that the in-ear monitors damaged his hearing and he now depends on hearing aids full time. Barry has also been scared of boiling water since a childhood accident and is cautious about other things. “I’m a safety-first type of person. I don’t drive fast. I don’t know why I am still here but I am very nervous about anything that could be fatal. That’s all down to that accident.”