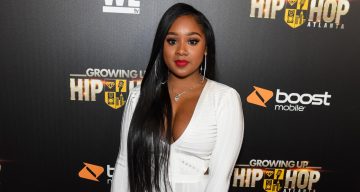 One of the main stars of WE tv’s hit show Growing Up Hip Hop Atlanta, Ayana Fite is slowly but definitely breaking away from her father DJ Hurricane’s shadow. She has grown up to become a confident woman with a clothing line she is very passionate about, and in this Ayana Fite wiki, we delve into her famous lifestyle.

While it’s easy for celebrity kids to just live a spoiled life, many of them strive to find an identity unique to them. Ayana went through the same situation and admits that she was definitely spoiled growing up, thanks to her father being a part of one of the world’s most famous hip-hop groups—the Beastie Boys.

But things have been looking great for the youngster since she realized that she wanted to make a name for herself in the fashion world.

Ayana Fite was Born and Raised in Atlanta

Ayana was born on December 23, 1990, making her age 27. She was born to Dawn and Wendell Timothy Fite (DJ Hurricane’s real name), and was raised in Atlanta. She has three siblings named Jarell, Jennifer, and Quran.

Growing up, Ayana got everything she wanted, which led her to live an oblivious lifestyle, not knowing that there’s a whole other side to it.

She toured with the group, and went to her father’s concerts like most musicians’ kids do. And with DJ Hurricane’s net worth amounting to $40.0 million, you can imagine the riches she enjoyed.

But, as she grew, she understood that she wanted to make a mark on the world like her father did, but away from his identity and money.

Lets be very clear. I pay my own bills with my own money, not my dad. He wanted 2 see me follow my dream so he offered 2 give me all my startup money so that i didn’t have to take out a loan. I haven’t asked him for 1 thing that wasn’t offered to me. That’s why he always says yes pic.twitter.com/xjoR2by08o

Ayana Is a Proud Member of the LGBTQ Community

Ayana always knew she was a lesbian, but hid her identity until after she had graduated. She even went on dates with men in order to fit in, but she was sure that she wasn’t into them.

Ayana broke the news to her parents after her graduation, and they were very supportive of her sexual orientation.

“I texted both of my parents that I was gay after I was living on my own,”  she said.

Her father DJ Hurricane wasn’t at all upset about it, and she thinks her mother likely already knew.

She confirmed in a video that she is not bisexual, but gay. And that she has been from the very beginning.

With the show on WE tv, Ayana believes she can help a lot of other people who are afraid to come out. She and her girlfriend of over three years, Amy, have been sharing their lives on social media as well, despite Ayana being a very private person.

The couple met at work when they were both managers at H&M. It seems that Amy made the first move, and approached Ayana via Instagram.

Her story is beautifully narrated on Growing Up Hip Hop Atlanta, and fans can’t get enough of the episodes!

Ayana’s costars on the show include Ms. Deb (Wacka Flocka Flame’s mother), Bow Wow, rappers Da Brat and Lil Mama, and a whole list of on-the-rise celebrities. The show is all about people from the hip-hop industry who are associated with/related to famous hip-hop stars.

The GUHHATL cameras follow the cast members documenting their gilded lives, and how each of them comes from a different background with a different story.

Ayana Fite is one of the most popular names from the show, and has brought so much to the reality series.

Fans love her for her “realness” and her determination. Ayana had a great job in the fashion industry as a stylist, but she knew she wanted to do something on her own.

Which is why she decided to launch her own clothing brand called Cozy Closet.

Everything is back in stock! Sorry for taking so long! You’ll also be able to see my journey with this photoshoot tomorrow night on #guhhatl. https://t.co/LzdYiFcu57 pic.twitter.com/kSupd26nGR

Apart from being the entrepreneur she is, Ayana is also known for her dramatic relationships with her castmates and her breast reduction surgery.

Ayana had a breast reduction surgery from the capable hands of Dr. Curves (Dr. Andrew Jimerson II). Ayana says she has had big breasts since she was little, and that she couldn’t bear their weight. She is petite in frame, and the breasts were unusually large for her size, which is what propelled her go under the knife.

She chose Dr. Curves for her surgery because she felt the most comfortable with him, and because he was not as uptight as the other doctors.

Ayana filmed a FAQ video so her fans could ask her anything about her procedure, which you can find on YouTube.

She also clarified some basic questions about the pain of the surgery and that she doesn’t have implants, and also talked about how she had a bladder problem post-op.

I want another breast reduction . The first one was for my back. This one would be cosmetic. But I don’t wanna go back under ?

When a fan asked her about breastfeeding, she replied that she never gave it a thought because she doesn’t want kids. She said she doesn’t have patience for children, and that she has no maternal instincts. She’s sure she would make a bad mother, which is why she wants to avoid the whole family thing.

Ayana has similar opinions about getting married, too, but she’s not too sure she wants to dismiss it altogether. She revealed that if she ever did get married, it would be to Amy.

“don’t need no butterflies when you give me the whole damn zoo” ?

Also Read: Who Is Bambi from “Love & Hip Hop: Atlanta?”