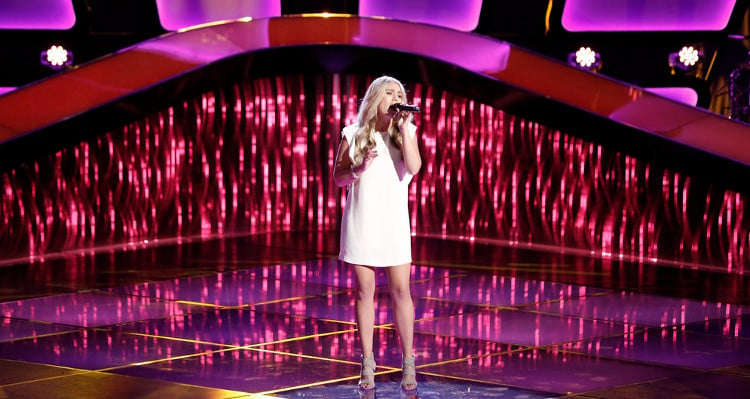 After several years as a backup singer for Carrie Underwood, singer Andrea Thomas is taking a shot at her own glory. Thomas cleared the Battle Rounds of The Voice season 12 and has made it to compete in the Knockout Rounds.

Andrea Thomas is no pushover when it comes to music. She used to be a backup singer for Carrie Underwood, and now has an achievement of her own. Thomas is a contestant on NBC’s The Voice season 12, competing as a country singer-songwriter on Team Blake. Thomas made it through the Blind Auditions and said that the experience of singing to the four judges with their backs turned was very humbling. Andrea Thomas and Micah Tryba faced off in the Battle Rounds, and Thomas emerged the victor. Since then, interest in Andrea Thomas has risen among viewers, and we have some details from Andrea Thomas’ wiki.

The Winner Takes All

In the Battle Rounds between Andrea Thomas and Micah Tryba, the two sung “What Hurts The Most” by Rascal Flatts. Both contestants sang from their hearts and did full justice to the song. However, only one singer could be selected to go into the Knockout Rounds. That decision fell on coach Blake Shelton, who chose Andrea Thomas as the winner, and Micah Tryba had to exit The Voice 2017.

Shelton always had faith in Andrea Thomas and he was the only coach who turned around for her in the Blind Auditions. It worked out well for Thomas in the end, who says that seeing Shelton spin around was “such a relief, ” and he was “honestly the only one I wanted.” Thomas revealed that her fiancé, Joshua Hand, had tried out for the first season of The Voice, but failed to get any chairs to turn. So, Thomas was determined to get one for both of them. And she did!

Andrea Thomas’ age is 31, which might be considered old by music industry standards. However, she says that she wants people to know that it is never too late to follow their dreams, saying “God has everyone’s moment right on time.” Thomas grew up in a family of gospel singers. Her grandfather, Jimmy Jones, was inducted into the Country Gospel Music Hall of Fame in 1999. He started a TV show on a local Christian network, and Thomas sang every week from the age of eight to 16. From 2012 to 2015, she sang backup for Carrie Underwood. Andrea Thomas’ net worth is not known, but she has been working as a sessions vocalist and lead singer in a cover band, allowing her to earn a healthy amount to support herself and pursue her musical dreams.

Giving It Her All

S I X | D A Y S away! And yes, I will be counting down every day. Not excited at all. @nbcthevoice #TheVoice #teamAndrea

Right now, Andrea Thomas is giving all she has to The Voice with the hope that she will win the competition. Andrea Thomas’ Instagram account is full of pictures from The Voice, her with friends, her idols like Dolly Parton, and inspirational quotes. Thomas’ talent and determination make her one of the strongest contenders on The Voice 2017. Her years spent singing as a backup singer are serving her well in the competition, and her dream of headlining her own tour might not be very far away!