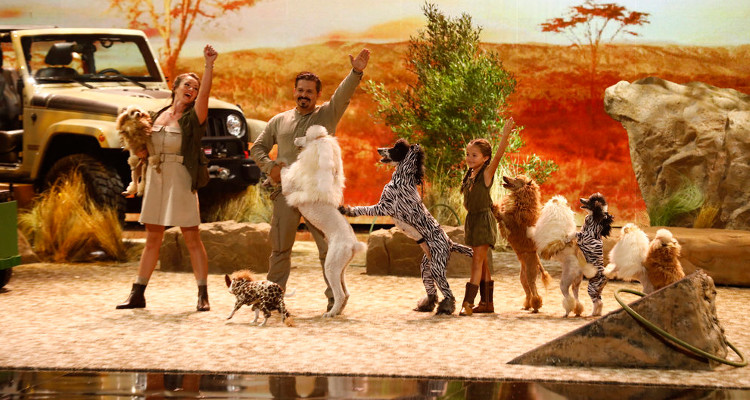 The adorable Pompeyo family dogs were back on AGT last night, and they received a “roaring” response after their safari-themed act. The pooches put huge smiles on everyone’s faces, and nobody could resist the dog circus on stage. Even Simon Cowell swayed to their act and ended up giving them a standing ovation. Find out all about them in our Pompeyo family wiki.

Where is the Pompeyo family from? How did they train those darling dogs? While we’re all wondering what it takes to put out a dog circus, the Pompeyos have come up with yet another smile-worthy act. Last night, fans saw the Pompeyo family dogs on AGT, and this time, the dogs went full Nat Geo on us! They performed to Katy Perry’s “Roar” wearing cute little animal printed clothes and manes. Find out the background of the Pompeyo family and their dogs right here in their wiki.

The Pompeyo family consists of Jorge, Natalya, Katerina, and Isabella. Jorge Nino Pompeyo is from Cali, Columbia. His family has been in the circus for four generations and he himself a circus performer. As a child, he was trained in various circus acts, and made his way to learning more advance acts like acrobatics, the flying trapeze, high-wire walking, and training animals. He debuted with a clown act when he was five years old. You can only imagine how good he is with training animals; his dogs are almost perfect!

Also Read: Colton and Trent Edwards on “America’s Got Talent:” Are the Mirror Image Twins Gay?

Natalya Demina is from Almaty, Kazakhstan, and she was interested in gymnastics since she was four. She started working towards competitive gymnastics and performed throughout her life. When she was 10, Natalya had an accident during a show after she fell on uneven bars and injured her back. She was bound to a month’s worth of treatment at the hospital and her father taught her how to walk again. The fall did not break Natalya’s spirits though, and she continued her journey as a gymnast from then on.

When she was 15, she turned her gymnast skills to circus acts, as most gymnasts in the former Soviet Union do, and began her circus journey. She started with an aerial act, and soon joined an acrobatic troupe and traveled around the world showcasing her skills.

Every Pompeyo Dog Has His Day!

Jorge and Natalya met in the United States in 2003, when they both performed for the George Garden Circus. Natalya was the aerialist and skilled acrobat, and Jorge was on the high-wire during their performance. They fell in love and decided to start a family. The idea of a dog act began when Natalya was pregnant with their first child, and Jorge performed the Globe of Death act. For the act, they were paid with two dogs, as the circus owner was short of money. Though this was not a fair payment, and Jorge and Natalya need the money, they had to make do with the pups.

Jorge and Natalya started training the dogs at home, and had the idea to start a dog act. But they needed more dogs. They began scouring animal shelters and homes that weren’t fit for dogs, and adopted them.

They rescued a lot of dogs, all of which were trained according to their natural abilities. The main six to nine dogs that are usually seen on stage became a huge success and in 2009, and the Pompeyo family earned their fame. Natalya and Jorge perform along with their dogs and daughters for a decade now. They have toured the U.S., Canada, and the Caribbean to name a few places and are seen in big names like Circus Sarasota, Lone Star Circus, and many more.

The family is now on the current season of AGT and are eying at the million dollar prize. Jorge, Natalya, and their daughter transported us all to a safari last night, with their dogs performing a very adorable camp-night act. They have already become a fan favorite, and by the looks of it, the dogs are proving to be man’s best friend!

Don’t forget to tune into America’s Got Talent on NBC every Tuesday at 8:00 p.m EST. Watch the Pompeyo family’s last act right here: