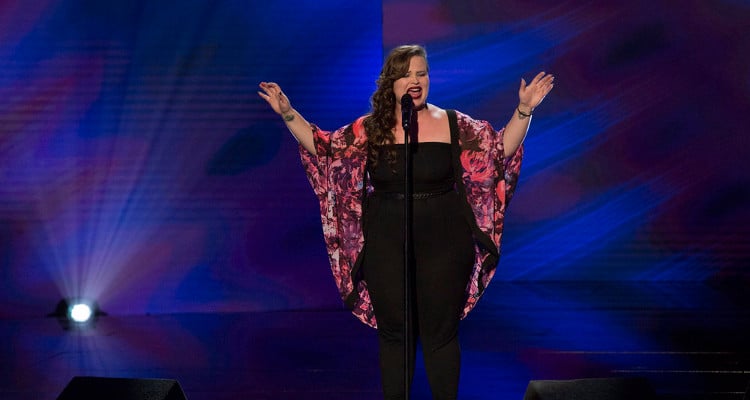 If you did not watch America’s Got Talent last night, then you need to do so right away because you missed something very spectacular. Yoli Mayor on AGT just kicked it up a notch and stole the show! Not only did she get a standing ovation, but she might have shaken some of her competitors after her rendition of “Love on the Brain.” If you did watch her last night, then you know what we’re talking about! Here’s more on the talented singer including Yoli Mayor’s Instagram and YouTube videos.

The competition on AGT is getting fiercer by the minute, and the contestants realized that they have a tough competitor in Yoli Mayor, who got up on stage last night for the Judge Cuts. Mayor is a powerhouse of talent, and she just proved her mettle by singing “Love on the Brain,” a tear-worthy song originally performed by Rihanna.

Know more about what happened during her performance last night, and what the judges had in store for Yoli Mayor right here.

During Mayor’s audition, as she sang “I Put a Spell on You” by Jay Hawkins. Simon Cowell stopped her midway and asked her if she was really true to herself. After some changes to her appearance and a song change, Mayor blew everyone’s mind when she sang “Make it Rain,” by Ed Sheeran, proving Cowell right.

Mayor came back last night on stage for the Judge Cuts, with DJ Khaled watching, and she set the stage on fire! She looked calm and focused, and everyone was just mesmerized by her voice from the moment she started to sing.

Simon Cowell mentioned her previous audition, and added that he could “see a transformation” in her this time. Mayor agreed and said that she feels more like herself now.

The 21-year-old is full of potential, and the judges agree! Heidi Klum even said that she has no doubts about Mayor’s success on this show.

Mayor is an extremely talented singer, and people are already considering her to be on the path of becoming a star soon! Fans of AGT already love her and want to know a lot more about Yoli Mayor. So here are some Instagram posts and facts you did not know about Yoli Mayor.

Yoli Mayor has been singing since she was two years old!

She would sing for the customers at her parents’ auto repair shop.

Mayor was born in Miami, Florida.

She struggled with her weight and thought she had to change to succeed.

She wants to see the world and the world to see her!