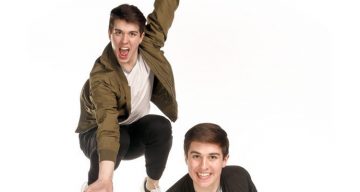 Mirror Image on America’s Got Talent impressed viewers and judges, except Simon Cowell, with their performance. But, after watching the Judge Cuts, people are wondering if the Mirror Image twins are gay.

Round two of the Judge Cuts aired on Tuesday, July 25 at 8:00 p.m. on NBC. This time, the guest judge was DJ Khaled. A total of 20 performances took place on the America’s Got Talent stage, but only seven advanced to the next round. In the Judge Cuts, every judge has to watch another performance of those shortlisted from the auditions and decide who will perform at the live shows.

During the auditions, viewers got to see a variety of brilliant acts. And the Judge Cuts did not disappoint! The judges are not often on the same page when it comes to the acts. Just like with Mirror Image twins.

The 16-year-old twin boys, Colton and Trent Edwards, are from Pittsburgh, Pennsylvania. They live with their parents, Gia and Kevin. The twins have always jointly exhibited their talents. One of them, Trent, ranked second in the Believe National Talent competition, which was for soloists between the ages of 15 and 19. Trent and Colton were part of a group of entrants from DeStella Dance Centre in Export, Pennsylvania who participated in the 2016 Pittsburgh Showstopper Dance Competition. Both are studying at Appolonia Leake Dance Company in Penn Hills.

Mirror Image on America’s Got Talent

When Mirror Image came on America’s Got Talent, they enthralled all the judges except for Cowell, who was surprised that they had the votes to make it through. Their energetic song and dance performance was enough to impress Mel B., Heidi Klum, and Howie Mandel.

Also Read: Matt Geiler Wiki: Who is the Dancing Pumpkin Man on “America’s Got Talent?”

They Made it to the Judge Cuts

Show your love for @_mirrorimage_ with a RETWEET now because they’re heading to live shows! #JudgeCuts pic.twitter.com/2d8FAPqBil

The boys just needed three votes to make it to the Judge Cuts, which they did. They sang Sia’s “California Dreamin’” and danced to “The Greatest.” The twins thought they would impress Cowell this time. Unfortunately, they failed to do so as he slapped them with a big red “X.” However, that did not stop them from dancing. Judge Mel B., who is their biggest supporter in the judge’s corner, said,” You two are special. You know, you made me feel really good inside. Forget the ‘X’ — you’ve got us, you’ve got me, rooting for you.” Guest judge DJ Khaled said that he was trying to figure it out. After the boys left the stage, Cowell said there would be a lot of arguments, to which Mel B. replied that she would get her way —which she did. Now, the Mirror Image twins will be exhibiting their talent at the live shows. Take a look at their performance below: