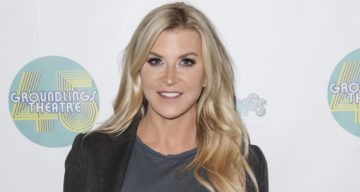 Hellboy, aka Ron Perlman, made his new relationship publicly official soon after separating from his wife of 38 years, Opal Stone. The Sons of Anarchy star shared a kiss outside a Pasadena restaurant with his StartUp costar, Allison Dunbar, back on May 15, 2019. The incident led to speculation that Perlman’s marriage was on the rocks and he was dating Dunbar. Now Perlman has filed for divorce from Opal five months after his PDA moment with Dunbar. Who is the new woman in Ron Perlman’s life? Our Allison Dunbar wiki has all the answers.

The actress was born Allison Barron on July 31, 1972 to Wendy Barron and Timothy Barron and hails from Delaware. However, it appears her family is originally from Ontario, Canada.

Allison Dunbar attended St. Mark’s High School in Milltown, Delaware. She has a brother, Christopher Barron, who lives in Annandale, Virginia with his wife Tracy and their kids.

Happy Birthday to the big brother who always kept me in check- who charged me for his silence when he caught me sneaking out, who loaned me beer money (to be repaid at the going interest rate) and who has my undying respect for the night you changed all the clocks in the house n set off my alarm clock so that I showered, put on my uniform, and walked to the bus stop at 2 o’clock in the morning. Chris you have a beautiful life, the greatest wife, and the coolest kids on earth- and it warms my heart to see you happy. Of all the big brothers out there, I’m so glad I got YOU. Happy Birthday Christopher!!! 🎂🎈🎊 #lafamilia

For several years now, Dunbar’s family has been based in Pennsylvania where her mother, Wendy, retired as the dean of Villanova University School of Law. Her father, Timothy, was a deputy attorney general in Delaware.

Norman Barron, her father’s twin brother, was a reputable attorney in Delaware who served as chief deputy attorney general for the state. Allison was close to her uncle, who passed away from cancer in 2018.

Dunbar Moved to New York for Her Acting Career

Ever since she was a child, Dunbar was drawn to a career in acting. She was dedicated to auditioning, improving her skills, and performing in open-air productions in her hometown.

After high school, she set her sights on New York City. Dunbar was accepted to several colleges. But Fordham University at Lincoln Center was the only one in NYC, so that’s where she moved to when she was 18.

While there, she also performed in the city’s theaters, such as The Majestic, The Judith Anderson, and The John Houseman Theater. During that time, she also appeared on TV shows like NBC’s Law & Order and Guiding Light.

Dunbar Was Part of The Groundlings

Allison Dunbar didn’t have it easy moving to L.A. For years, she weathered highs and lows in auditions and couldn’t get bigger roles.

When I moved to LA and saw my first show at the Groundlings, I thought they were the funniest people on earth… If you had told me I were to become one of them, I would never have believed it. This place gave me the opportunity to unleash my creative lunacy on the world, the greatest of idiot friends, and a second home. So lucky to be a part of this epic comedy tradition that celebrates 45years today!! @thegroundlings #groundlings45th #anniversary #sketchcomedy #celebration #thingstodoinla #moronclique #idiots #jokers #clowns #numberone #babosians #papajohns #rhonda #wilbur #grovetrolley #fredgandy #marinadelrey

One of her earliest breaks was on the doomed Comedy Central show Strip Mall. Her AMC show, FilmFakers, ended after a season, too.

Dunbar’s biggest role in her early career was a four-episode stint on The Sopranos where she played Nicole Lupertazzi, wife of of “Little Carmine” Lupertazzi Jr. Besides that, she appeared in CSI, Drake & Josh, Criminal Minds, Bones, Anna Nicole, Rizzoli & Isles, and 2 Broke Girls.

After struggling to find better work in Hollywood, Dunbar’s dream came true when she was selected to join the crew of The Groundlings, one of the most famous comedy improv troupes in the country. Dunbar used to attend their shows when she first moved to L.A. So, she was not unfamiliar with the troupe that spawned stars like Will Ferrell, Jimmy Fallon, Conan O’Brien, Melissa McCarthy, Maya Rudolph, Lisa Kudrow, and more.

It turned out that combination of The Sopranos and The Groundlings launched the actress on a successful career, as Dunbar landed spreads in magazines and more roles. In recent history, she’s appeared in Modern Family, Yellowstone, and Crazy Ex-Girlfriend.

She also worked alongside Ron Perlman in the gritty Sony Crackle drama StartUp. And she’s got four projects in post-production.

StartUp Season 3 drops today on Sony/Crackle and Amazon! ❤️ this group of talented idiots. Here are some shots of what we were doing off 🎥- basically booze, beach, and jenga ✌🏼🐠🍹🌮🥃🏝

Sean O’Donnell, the Canadian-born NHL defenseman, retired in 2013 after 17 seasons. But it’s not very well-known that he was once married to future Groundlings talent, Allison Dunbar.

O’Donnell was playing for the Los Angeles Kings when he met Dunbar in 1998. Analysts had even considered their relationship when speculating on O’Donnell’s trade back then.

The couple was going to marry in the summer of 2001, making New York and California, where Dunbar was based, O’Donnell’s most possible trade choices. O’Donnell and Dunbar tied the knot later that year, and he was dealt to the New Jersey Devils in 2001.

But Allison Dunbar’s newest alleged relationship has pushed her into the spotlight. Speculation began when she was spotted sharing a kiss with Ron Perlman in public back in May 2019.

The divorce documents list the date of separation as May 10, 2019. According to TMZ, Perlman and Dunbar’s PDA incident was on May 15, implying that he went public with his new relationship just after officially splitting from his wife.

Since going public with their relationship, Dunbar has received less than favorable attention on social media. Many are accusing her of being a homewrecker. However, it appears she’s tuning out the negativity.