Photo: We Run With Maud/ facebook.com

Ahmaud Arbery would have been celebrating his 26th birthday with his family and friends today if it weren’t for that terrible day that he was fatally shot. Arbery, a black man, was killed on February 23 in an altercation with Travis and Gregory McMichael, two white men. However, it took more than two months and several campaigns for justice for arrests to be made. His case has now gained national attention with the arrest of his assailants. Our Ahmaud Arbery wiki explains the details of this case.

Ahmaud Arbery Was a Former Athlete Learning a Trade

Ahmaud Arbery was born on May 8, 1994; he would have turned 26 this month. He is the son of Wanda Cooper-Jones and Marcus Arbery, Sr.

The Georgia native was a standout football player at Brunswick High School before graduating in 2012. He went on to attend South Georgia Technical College and was training to be an electrician.

Being a former athlete, Arbery followed a fitness regime. Running three to five miles a day was part of his routine. According to those who knew him, he used to jog several times along the route where he ended up being killed.

On February 23, 2020, Ahmaud Arbery was jogging in the Satilla Shores neighborhood in Brunswick, Georgia. Gregory McMichael, a former cop, was in the front yard of his home when he spotted Arbery on the street.

He suspected Arbery was a suspect wanted in a spate of recent home break-ins in the neighborhood. But Gregory didn’t call the police. Instead, he called his son, Travis McMichael, and both followed Arbery in their truck.

The McMichaels were armed; Gregory with a .357 Magnum handgun and Travis with a shotgun. A third man, William Bryan, followed in his own truck and recorded a video of the incident on his phone.

When Arbery realized the McMichaels were following him, he tried to get away. However, he wasn’t successful and a struggle began between Arbery and Travis, which ended with Arbery being shot at three times. The young man died on the street.

In the 36-second video of the incident filmed by Bryan, the first two shots are heard before Travis is seen shooting Arbery a third time at point-blank range. Gregory has his handgun out, but doesn’t fire.

The McMichaels Were Arrested Two Months After the Shooting

In the police report that was released to the public, Gregory McMichael claimed that Arbery matched the description of a suspect in a string of burglaries in the area.

No arrests were made immediately, which led to public outcry.

On May 5, 2020, a local radio station released the video of the incident after receiving it from an anonymous source. The video went viral, sparking increased public call for action against the shooters.

The Georgia Bureau of Investigation took over the case after the video was released. A couple of days later, Gregory and Travis were arrested. They are facing charges of murder and aggravated assault.

Gregory McMichael had worked with the Brunswick Judicial Circuit District Attorney’s Office for over two decades. Due to his connection to the office, two prosecutors recused themselves from the case.

Gregory claimed that Arbery tried to “violently attack” Travis, but the video shows that he was trying to run past their truck when the confrontation broke out.

One of the prosecutors who recused himself wrote a memo saying that Arbery “initiated the fight” and Travis was within his rights to use “deadly force” to protect himself. 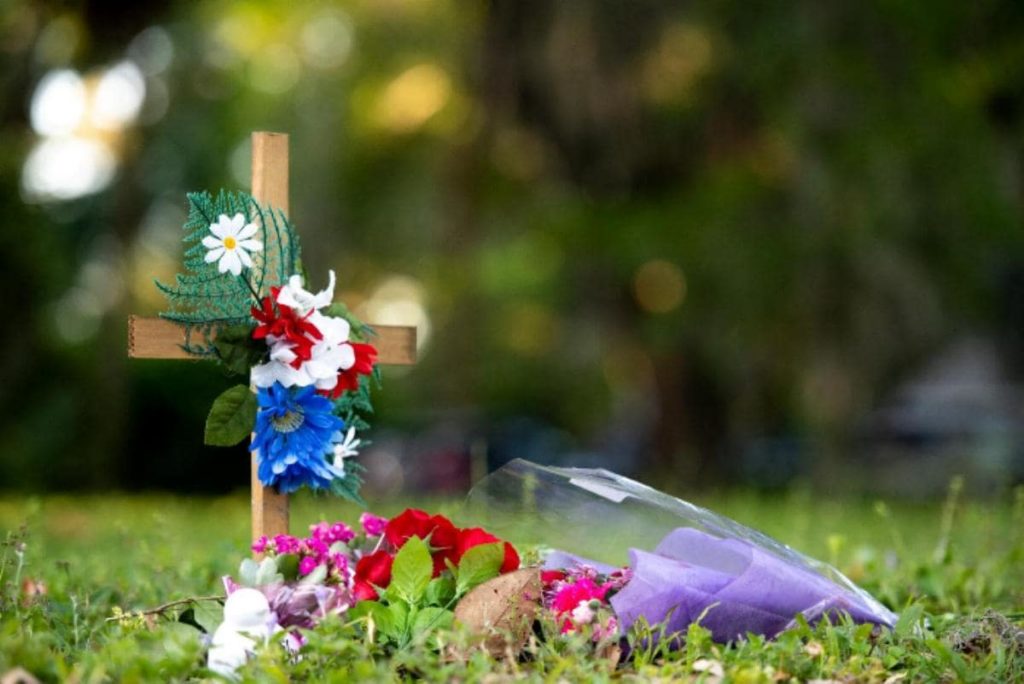 A cross with flowers sits near the intersection of Satilla Rd. and Holmes Rd. in the Satilla Shores neighborhood where Ahmaud Arbery was shot and killed during a confrontation with an armed father and son on Feb. 23 . (Photo by Sean Rayford/Getty Images)

On the day of his killing, security cameras caught Arbery entering a house under construction. His aunt identified him in the video, but said he wasn’t stealing anything.

Gregory McMichael also brought up Ahmaud Arbery’s past arrest record. When Arbery was in high school, he was arrested for bringing a handgun to a school gymnasium and then fleeing from a police officer.

In addition, one of the prosecutors alleges Arbery had a history of mental illness, but there is no record of Arbery of this.

Arbery’s parents and family, along with notable public figures, have demanded justice for Ahmaud Arbery. The slow investigation has angered many. However, the case can only be presented before a grand jury after the COVID-19 pandemic subsides.