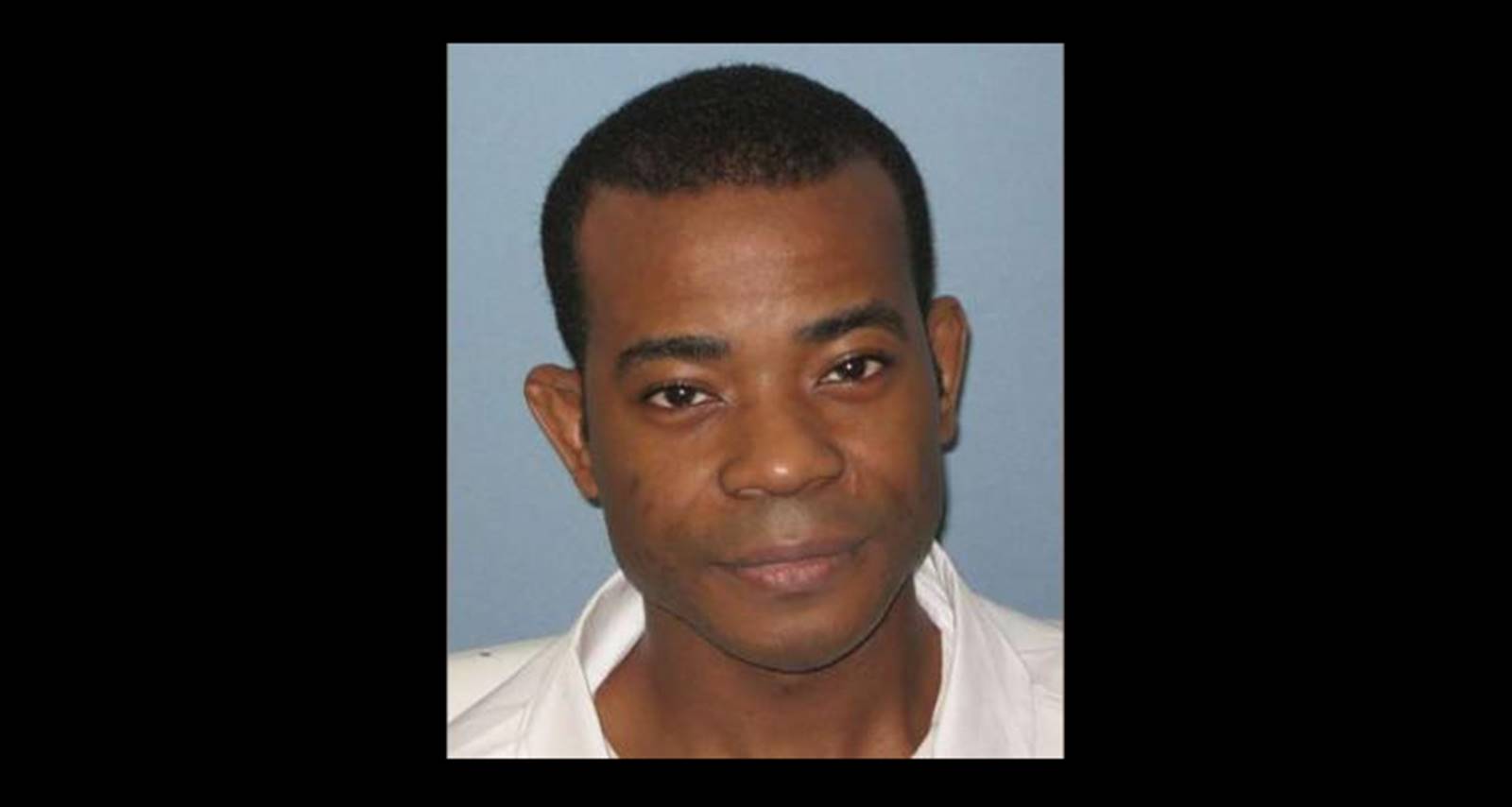 Alabama executed Nathaniel Woods on March 5, 2020 for the 2004 killings of three Birmingham police officers. There have been questions about culpability in Woods’ conviction, and several activists had been petitioning for a stay of his execution. Furthermore, his co-defendant, Kerry Spencer, had also proclaimed Woods’ innocence. This Nathaniel Woods wiki elaborates more on this man’s story.

Nathaniel Woods Was Convicted for the Deaths of Three Policemen

Nathaniel Woods Jr. (born 1976) was one of three children born to Nathaniel Woods Sr. and Pamela Woods. The couple also have two daughters, Pamela and Heavenly. The family is from Alabama, where Nate was executed.

Nathaniel Woods and Kerry Spencer, who were at the drug house where the shooting happened, were convicted of capital murder in 2005 for the deaths of the three officers. Both were on death row, while Woods’ execution was set for March 5, 2020.

However, Woods’ family, lawyers, friends, activists, and celebrity supporters petitioned for a stay of Woods’ execution. Spencer and many others have claimed that Woods did not pull the trigger that killed three cops and injured one.

Woods and Spencer Were Drug Dealers

According to Kerry Spencer, Nate Woods began dealing drugs with him because he was in need of money. But Spencer describes Woods as someone not cut out for that kind of life.

He was soft-hearted and often gave out the drugs for free if unsupervised, Spencer said. Family and friends also recalled that Nate had financially helped them out despite not having much money himself.

Woods and Spencer operated out of an apartment in a neighborhood notorious for drug activity. The four Birmingham police officers were reportedly patrolling the neighborhood on the night of the killings.

The duo ran into two cops earlier that night and were hiding out in the drug house until those two officers would complete their shifts. Woods and Spencer were sleeping in that apartment with plans to return to their respective homes later, according to Spencer.

The four officers would enter the drug house to serve an arrest warrant on a misdemeanor assault charge. Authorities said that they first detained Woods, who allegedly sold crack cocaine to more than 100 people daily. However, before he could be booked, his partner Spencer opened fire on the officers.

By the time the assault ended, officers Charles Bennett, Harley Chisholm III, and Carlos Owen were dead. Collins was seriously injured in the shooting.

Nate Woods hadn’t pulled the trigger. But prosecutors claim that Woods was the mastermind behind the killings.

Woods reportedly had gained notoriety for hating police. The prosecutors allege that he lured the four officers to the drug house where Spencer shot and killed them. They secured a conviction for capital murder against Woods in 2005.

Spencer was initially given life without parole by the jury, but the judge changed it to a death sentence. Less than four months later, the same judge and prosecutors tried Woods as his accomplice, and for planning the murders of the policemen. Nate proclaimed his innocence throughout.

The jury voted 10-2 in favor of the death penalty for Woods in the shooting deaths of three officers. Despite the non-unanimous jury, Alabama law at that time allowed for a judge to impose a death sentence based on non-unanimous jury sentencing recommendation.

The non-unanimous jury raised questions about Woods’ culpability in the crimes. His family and friends and his defense argued that he was innocent. Spencer, too, gave an account of events opposed to the prosecutors’.

Woods and Spencer were on death row at Holman Correctional Facility.

Woods’ parents and sisters, with the help of activists and friends, campaigned to save Nate from the death sentence. The “Save Nate Woods” website and other petitions claim that his case was mishandled and rife with police misconduct and judicial neglect.

According to the petitions, there was no evidence that the killings were premeditated. Surviving officer, Collins said that he heard Nate surrender when Spencer opened fire. The petitions also raise concerns about witness and evidence tampering.

Woods’ supporters said that his original court-appointed counsel misled him with poor advice over a plea deal and later abandoned him. Prosecutors claim there’s no evidence that the DA offered a plea deal to him.

When they were arrested, Spencer had initially refused to speak. Eventually, he would talk to proclaim Woods’ innocence.

In Spencer’s version of the events, given on June 17, 2005, he had the SKS rifle on him when he woke up to some sounds in the other room. He would later find Woods and cops in the apartment.

“When I looked to the side, there was two police officers trying to train their guns on me so I opened fire with the f***ing rifle. I wasn’t trying to get shot, period. I got a rifle in my hand. They’re going to shoot me,” said Spencer.

“When I opened fire, Nate jumped as if he was getting shot, you understand? And once he seen he wasn’t getting shot, when I kept firing, that n***a took off,” Spencer said, claiming that Nate ran away when the shooting happened.

After their arrest, Spencer, who had a brotherly bond with Woods, proclaimed his partner’s innocence. “I told them Nate didn’t shoot nobody. Nate ran. Nate didn’t even have a f***ing gun.”

The death row inmate also joined other supporters of Nate to petition Alabama Governor Kay Ivey to commute Woods’ sentence. He wrote a letter from prison to the governor saying, “Nathaniel Woods is 100% innocent. I know this to be a fact because I’m the person that shot and killed all three of the officers.” 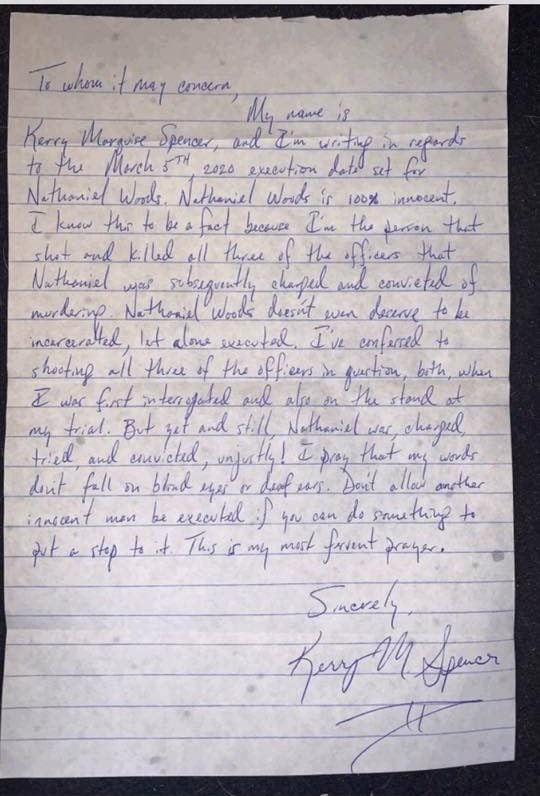 Celebrities Petitioned for a Stay of Woods’ Execution

Prosecutors continued to claim that Nathaniel Woods is not an innocent man. They said that Woods had threatened officer Owens who had arrested him as a teenager. When the cops found out there was a warrant out in Woods’ name, they went looking for him in the drug house.

They also allege that he was not an innocent bystander. He allegedly boasted about the officers’ killings in drawings and songs.

But Woods’ supporters continued to fight for a stay of his execution ahead of the March 5 date. In petitioning to Governor Ivey, his friends and family earned the support of big names in activism.

Martin Luther King III, the son of the civil rights icon, made public pleas to the governor to save “a man who is very likely innocent.” Bart Starr Jr., whose father was the NFL legend, Kim Kardashian West, and O.J. Simpson also rallied behind Woods.

Most notably, officer Chisholm’s sister also proclaimed Woods’ innocence and urged the governor to intervene. Most of the relatives of the slain officers have remained silent on the issue.

But Woods and his supporters lost their battle when their petition for a reprieve was denied. Nathaniel Woods’ execution was carried out on Thursday, minutes after the Supreme Court denied a temporary stay.

He had asked for a final meal, but left most of it untouched. He had made calls to his parents, sisters, daughter, and friends earlier that day.