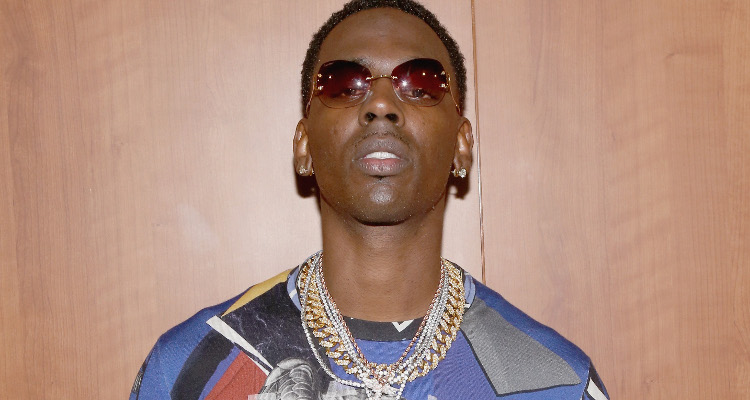 Rapper Young Dolph was shot and is currently in critical, but stable, condition in a Los Angeles hospital. If you are wondering who Young Dolph is, keep reading for everything you need to know about the rapper, including Young Dolph’s net worth of an estimated at $1.0 million.

On Tuesday afternoon, Chicago-born Young Dolph was shot outside of his Hollywood hotel after a reported physical altercation with three other men. This is the second time this year that the 32-year-old was involved in a shooting, as his SUV took over 100 bullets in February, while the rapper was in North Carolina. Luckily, he had bulletproof panels installed in the vehicle, so he was able to leave the scene uninjured. Three people were arrested in connection with the shooting in May. Read on to know more about Young Dolph’s net worth right here.

Who Is Young Dolph?

Adolph Thornton Jr. was born on August 11, 1985 in Chicago, Illinois, but was raised in Memphis, Tennessee where he and his family moved when he was two years old.

Young Dolph mentions his childhood in a few of his songs, revealing that his parents smoked crack, and he was raised by his grandmother. He has two bothers and two sisters. The rapper was surrounded by drugs and alcohol growing up, but did not let that define himself as a person.

Young Dolph was always interested in music and had a talent for rapping at a young age. In fact, it was his friends who encouraged him to try making an album. By the time he was 23, Young Dolph was ready to record his own music. However, tragedy struck as he lost his grandmother to lung cancer not long after he suffered a near-fatal car crash.

He turned to music as an outlet, and released his first mixtape, Paper Route Campaign. It did not take long for the rapper to become a sensation! The budding artist then went on to release mixtapes like, Welcome 2 Dolph World (2010), High Class Street Music 2: Hustler’s Paradise (2011), High Class Street Music (2011), A Time 2 Kill (2013), and South Memphis Kingpin (2013).

It was in 2015 that Young Dolph saw new heights in his career after being featured in the chart-busting single “California” by Colonel Loud. The single helped push his career forward, and he knew then that he was here to stay! The single made its way to the top 10 in Billboard‘s Hot Rap list.

Later that year, Dolph was featured in Cut It, by O.T Genasis and this track sat at No. 94 on the U.S. Billboard 100 and peaked to  No. 35. The song went platinum a little over a year later, and sold over 1,000,000 copies, making Young Dolph a rapper to watch out for!

?LAPD has named #YoGotti a person of interest in the assault on #YoungDolph.? Law enforcement sources claim #YoGotti and #YoungDolph were both staying at the Loews Hotel in Hollywood Tuesday when their crews somehow crossed paths and a disagreement followed. Sources say a short time later, shots were fired outside the hotel. Witnesses at the scene reportedly told officers Gotti was involved. Is this a coincidence or is this an active hit on Dolph? What do yall think?

It was in 2016 that Young Dolph’s first studio album, King of Memphis was released. It has 13 tracks and also saw a lot of success on the charts! King of Memphis earned Young Dolph his name, and he could not have started the year on a better note.

However, nearly a year afterwards, Young Dolph was involved in a shooting while in North Carolina. Thankfully, he was in his bulletproof SUV at the time, but more than 100 shell casings were found near his vehicle. The rapper drew inspiration from the attack, and in April, released his second full length album, Bulletproof. Gucci Mane was featured on the album’s promotional single, “That’s How I Feel,” and the album peaked at No. 19 on the Billboard U.S. Top R&B/Hip-Hop Albums chart.

On September 26, Young Dolph was rushed to the hospital, after being shot in Hollywood, and is now said to be in critical but stable condition. One man has been detained, while the other two have not yet been found. Fellow rapper Yo Gotti, who was also said to be connected with the February 2017 shootings, is now considered a person of interest in this case.

Learn more in the CBS report below:

#TheLiveReport Young Dolph was just shot in Hollywood and is being rushed to a local hospital. At this time, no arrests have been made and it's unclear how many people may have opened fire. We're told he suffered multiple gunshot wounds but his injuries appear to be non-life threatening #LiveReport #youngdolph shot numerous times in #Hollywood #News #Blog #Hiphop #LA #FACTs #media #Broadcast #Live #stoptheviolence

Young Dolph’s net worth is estimated to be $1.0 million, as the rapper rapidly moved to the top! With albums and tracks that are inspired by his life, Young Dolph proved himself to be a genuine artist who found success by being himself. He reportedly earns $30,000 per show, the views from his YouTube channel also earn him a fair amount of money! It is estimated that he earns $11,600 in ad revenue through his channel and has earned a lump some from his album sales too!

According to Rolling Stone Young Dolph’s home is in Atlanta, but what features it boasts are not known. In January, it was  also reported that his girlfriend was expecting the couple’s second child.