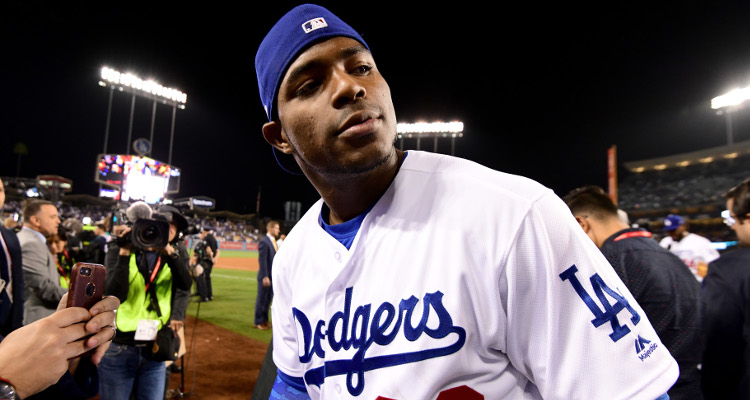 Yasiel Puig challenged the Houston Astros that there would be a Game 7. It took the L.A. Dodgers’ Wild Horse climbing the barrier to try and get a catch and coaching Chris Taylor from the sidelines, but his words came true. The Dodgers and Astros will compete for the World Series title in the decisive Game 7. Yasiel Puig’s girlfriend, Andrea Berenice, joins the other Dodgers WAGs to cheer on their beaus in the diamond. Learn all about Puig’s girlfriend, right here in our Andrea Berenice de la Torre wiki.

Very little is known about de la Torre except that she’s of Mexican descent and has two brothers, Edgar and Diego de la Torre. Her brothers have occasionally made an appearance on her Instagram. And from the looks of it, they have a close bond.

The Cuban baseball player launched a campaign to raise money for relief efforts in Puerto Rico and Mexico after Hurricane Maria and a dreadful 7.1 magnitude earthquake devastated the two countries.

Puig’s YouCaring campaign has currently raised a little over $1,000. His girlfriend is, of course, also doing her bit for her home country. She is urging her Instagram followers to contribute to the $300,000 goal.

De la Torre accompanies her baseball beau to many events and trips. She is a big presence in the Dodgers WAGs circle, which gives her certain privileges. For instance, she gets to travel on a helicopter and can take pictures with a signed Babe Ruth baseball from 1939—without the glass case!

They Have a Son

Andrea de la Torre gave birth to their son, Daniel Sebastian, in February this year. His parents celebrated his birth with heartfelt announcements on Twitter and Instagram. The littlest Puig arrived a week earlier than expected, but de la Torre wrote in her caption that her pregnancy was “a piece of cake.”

The proud mama’s Instagram is filled with pictures of her son. The latest is from Daniel’s first Halloween, and he makes the cutest monster ever.

Puig has another son, Diego Alejandro, from a previous relationship with his then-girlfriend, Nicole Chaves. Puig and de la Torre have been together since 2014, a year after Chaves gave birth to Diego in December 2013.

She’s Going to be Outnumbered

The Wild Horse is going to be a dad for the third time, as they recently announced that de la Torre is pregnant! Puig and his girlfriend celebrated the grand gender-reveal of their second child in true Dodgers style. Puig, de la Torre, and their son, Daniel were at Dodger Stadium in August. And, de la Torre shared the moment on her Instagram.

Puig swung the bat and hit the ball, only for it to go up in a puff of blue smoke! The Puig household is welcoming another boy!

The Dodgers also made nickname jerseys for the family. And little Daniel is seen wearing a “Big Brother” baseball onesie.