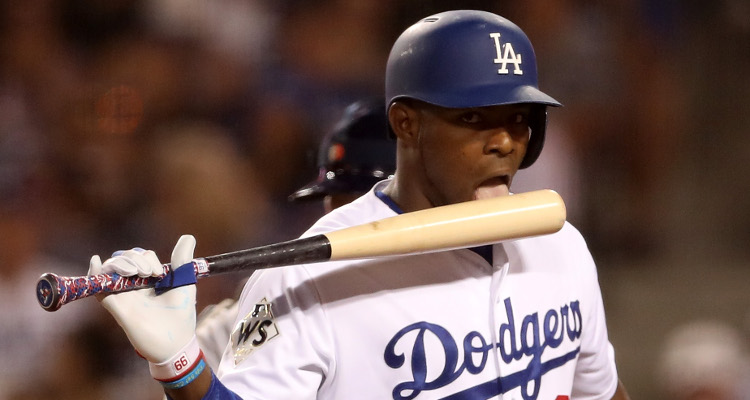 The Los Angeles Dodgers lost the second game of the World Series against the Houston Astros, but they kept the game exciting with the Dodgers’ right fielder hitting a leadoff home run before striking out. Who is the blue-haired batting powerhouse? Take a look at our Yasiel Puig wiki for more.

Born on December 7, 1990 in Cienfuegos, Cuba, to Maritza and Omar Puig, Yasiel Puig’s age is 26. He has a younger sister named Yaima, and his father was an engineer who worked in a sugar cane factory. As a child, his father gathered wood so that his friend could make baseball bats for his son.

In order to be eligible to play for the MLB, Puig made at least 13 attempts to become a Mexican citizen. From having his car pulled over to making arrangements with a drug cartel, he was finally a legal resident and eligible to be a free agent.

Puig always knew he wanted to play baseball professionally. In an interview, he recalled a time when he fell off his bike on game day when he was on the 15 and 16-year-old team, “There was a lot of blood. Everybody told me not to play, but I didn’t listen and went 2-for-3. That’s when I knew I could make it.”

His career started in 2008 when he played for the Cuban national team at the 2008 World Junior Baseball Championship and won a bronze medal.

However, in the 2011 World Port Tournament, Puig and his teammate Gerardo Concepcion tried defecting to Mexico. Although Concepcion was successful, Puig was not, and was subsequently banned from playing the following season.

In 2012, he signed a contract with the Los Angeles Dodgers worth $42.0 million! He played his first Major League Baseball game when he was 22 years old the following year. Almost every game Puig has played in his pro career was with the Dodgers.

It was in the 2014 season that he was voted starter for the MLB All-Star game. He was also a two-time National League Player of the Month, and earned National League Rookie of the Month honors in June 2013. Throughout his career, much like many athletes, Puig had a tradition seen in almost every game. He licks his bat! But why does Yasiel Puig lick his bat? To explain, the player said, “I make love to the bat and he pays me back with hits.”

Famously known as “The Wild Horse,” Puig got his nickname given to him by former Dodgers broadcaster, Vin Scully.

The Dodgers’ right fielder accomplished a lot of things in his life with sheer hard work and determination, thanks to which Yasiel Puig’s net worth is estimated at $8.0 million. Yasiel Puig’s salary is approximately $6.0 million, with his base amount said to be $6.5 million in 2017.

Yasiel Puig’s seven-year contract with the Los Angeles Dodgers is estimated to be around $42.0 million, which includes a $12.0 million signing bonus.

Is “The Wild Horse” Married?

The 26-year-old is in a relationship with Andrea Berenice de la Torre. It was reported that she is of Mexican descent, and the duo started dating in 2014. Not much is known about his girlfriend or her personal life other than that she has two brothers, Edgar and Diego de la Torre.

Puig and de la Torre have a son together, Daniel Sebastian, who was born on February 2, 2017. Puig announced the news of his birth on Twitter and Instagram. The couple recently revealed that they are expecting another child.

Puig also has another son from a previous relationship, Diego Alejandro, who was born in December 2013.