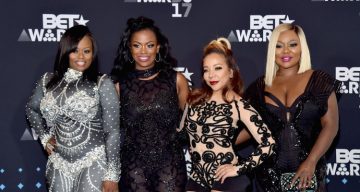 After a hiatus of almost two decades, the female R&B foursome, Xscape reunited this year. Last night at the BET Awards 2017, they performed together for the first time in 18 years.

Kandi Burruss, Tameka “Tiny” Harris, LaTocha Scott, and Tamika Scott reunited as their old R&B group, Xscape. The Jermaine Dupri-discovered quartet are set perform after almost two decades at the 2017 Essence Festival, but we didn’t have to wait too long to see them in action because Xscape gave a preview at the 2017 BET Awards. Xscape’s BET Awards performance marks the hit group’s glorious return to music. Check out their stellar performance right here.

The ladies of Xscape have Billboard hits and platinum-selling albums together. But they went their separate ways nearly 18 years ago. Kandi is pretty famous as a reality star on The Real Housewives of Atlanta, while the Scott sisters and Tameka pursued solo music careers. They also had successful songwriting careers —Kandi’s most notable work being “Bills, Bills, Bills” by Destiny’s Child.

In February this year, the formerly feuding ladies buried the hatchet and came together for their first interview in years as a group. They announced their comeback tour and said that their first live performance would be at the 2017 Essence Festival, which begins on June 29. But they gave fans a taste of what to expect at the BET Awards 2017 last night, and it was amazing!

With a medley of their hit songs “Understanding,” “Who Can I Run To” and “Just Kickin’ It,” the group had the entire house on their feet. Even after all these years, the ladies haven’t missed a beat. And they still look fabulous!

If you missed the reunion of a lifetime, watch it on BET’s website right here. We can also look forward to more from the group as Bravo has greenlit a four-part Xscape special coming this fall, just in time for the 25th anniversary of their debut album, Hummin’ Comin’ at ‘Cha.

“We are so excited to team up with Bravo and give our fans an up-close-and-personal look into our lives as we get ready for Essence Fest!” Xscape said in a statement. “This process has been a whirlwind with so many ups and downs, but we are loving every minute of being back together, and cannot wait to share the love, laughs, and craziness with you all!”

The group was discovered by Jermaine Dupri and at their prime, they had three consecutive platinum albums and six top 10 songs on Billboard. However, the differences among the members, specifically Kandi and LaTocha, caused the group to part ways. But the ladies have put their differences aside as they prepare for their upcoming tour.