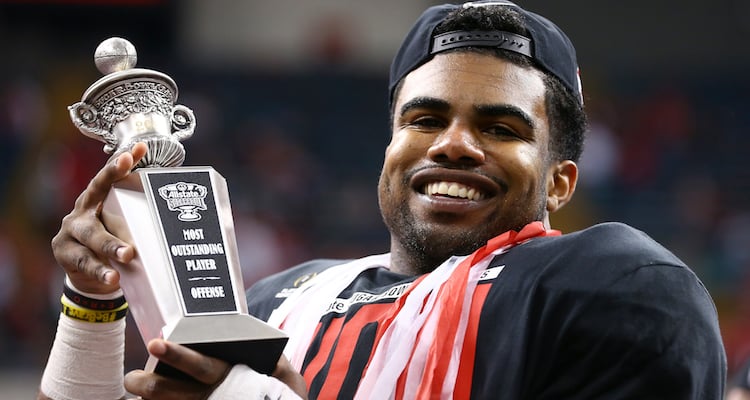 A Brief Overview of Elliott’s Career

To say expectations for Ezekiel Elliott’s NFL career were high would be a little bit of an understatement. Labeled by many as the most complete running back to come to the NFL since Adrian Peterson in 2007, he possessed a combination of speed, size, blocking ability, and passing ability that hadn’t been seen for some time. As such, the Dallas Cowboys wanted Elliott badly and ended up drafting the young running back in the first round of the 2016 draft as their fourth overall pick. His contract is reportedly for four years and worth $24.9 million, with a $16.3 million signing bonus. Unfortunately, just into his second year in the NFL, trouble arose.

What did Ezekiel Elliott do to get suspended? The answer to this is both very simple and very complicated. In August 2017, the NFL suspended him for violating its personal conduct policy. The previous month, an ex-girlfriend of his filed police reports against Elliott claiming abuse in Columbus, Ohio. While it was investigated, the police decided not to press charges. Meanwhile, the NFL did its own investigation and, citing evidence of at least three separate acts of violence towards the woman who filed the allegations, Elliott was reportedly suspended for six games at the start of the 2017 season. The next part is where it gets complicated.

Backs Against The Wall …

He appealed the suspension and the NFL brought in an independent arbiter who decided to uphold the suspension, despite the fact that the NFL’s own investigator recommended that there be no suspension, and no criminal charges were ever placed. This upheld suspension lead to the NFL Players Association filing a lawsuit stating that the disciplinary process was fundamentally unfair, as well as an injunction that kept Elliott on the field until the entire mess was sorted out. This began a process where the suspension was upheld and then rescinded numerous times.

Where the Suspension Now Stands

If this is the case, why is Ezekiel Elliott not playing? At the end of the day, the back-and-forth in the courts was getting very little done to further Elliott or the NFLPA’s cause. The NFLPA withdrew its lawsuit and Elliott reportedly dropped his final appeal with the NFL. As such, his suspension currently stands in its entirety of six games, which is the minimum suspension for a domestic violence charge in the NFL. Because of the alternating decisions, Elliott never actually served any of the suspension, which means he will not be available to play for the Dallas Cowboys until Week 16 of the season when they face off against the Seattle Seahawks. In the meantime, the entire ordeal has brought into question the NFL’s disciplinary process, and though Elliott possibly left the country for some time, he will reportedly continue training for the current season.