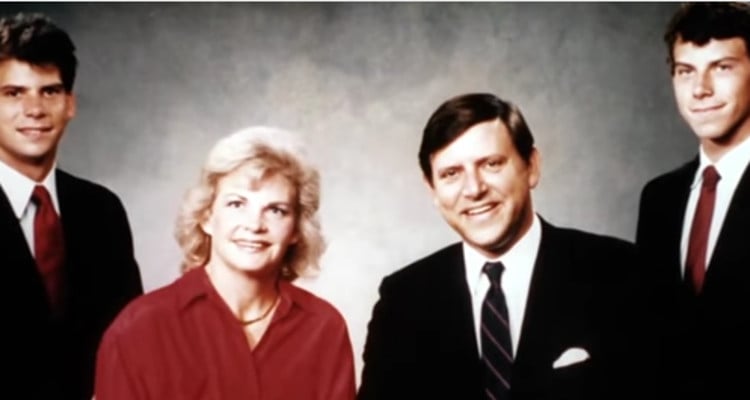 In the ‘80s, a very high profile murder trial became nationwide news. Lyle and Erik Menendez reportedly killed their parents in cold blood, sending shock waves through the public. To date, the question remains: Why did the Menendez brothers kill their parents?

In 1989, José and Kitty Menendez were brutally shot to death in their home after which their son, Lyle, called 911. Lyle and his brother, Erik were portrayed as the grieving sons for a while before they became the prime murder suspects in the case. In the high-profile trial, Erik and Lyle Menendez were convicted for the murder of their parents. This came after they tried to create solid alibis and manipulated the crime scene. The cruelty in the way José and Kitty Menendez were killed became sensationalized. But why did the Menendez brothers kill their parents? That’s what Lifetime’s new movie, Menendez: Blood Brothers will explore.

Lyle and Erik Menendez were born into a life of luxury as the children of Hollywood executive, José Menendez and Kitty, a socialite. A Cuban immigrant, José was a self-made millionaire. He worked as a dishwasher while studying accounting at Queens College. He rose through the ranks of companies like RCA, before becoming vice president of Carolco Productions. The family lived in a mansion worth $5.0 million that was once home to Elton John.

José reportedly pressured his sons into mirroring his success. The boys went through a rebellious stage and got into a lot of trouble. As furious as their father was, José would use his influence to get them out. He reportedly drafted a new will that would remove a significant amount of his and wife’s estate from being inherited by their sons. Lyle later confessed to a friend, after his parents’ death, that he deleted the updated will from José’s computer —something that ended up being used against the brothers in court.

On August 20, 1989, Lyle (20) and Erik (18) shot their parents to death in their Beverly Hills mansion. Among the multiple gunshot wounds between the two victims, José was shot point blank in the back of his head with a shotgun. Kitty was left almost unrecognizable as part of her face was shot off.

Erik and Lyle Menendez tried to stage the crime scene as if it were a mob-hit, by shooting their parents in the kneecaps. The brothers got rid of the guns and their bloody clothes in a dumpster. They bought tickets for a film they didn’t see and went to Santa Monica to find one of Lyle’s friend, who they hoped would serve as an alibi, but were unsuccessful in locating him.

They returned home and set off the next stage of their plan. Lyle called 911, “Somebody killed my parents!” he is heard saying on the 911 recording. When the police arrived, the brothers said they had gone to see License to Kill, but saw Batman instead. They then went to the annual Taste of LA festival in Santa Monica and returned home to find their parents murdered.

A week after their parents’ death, a grieving Lyle test drove a Porsche, and put a down payment on a restaurant. Erik hired a tennis coach to further his burgeoning tennis career. The brothers drove around in their mother’s Mercedes and went overseas on vacation. They would later tell Barbara Walters that it was their way of dealing with the grief. But their ostentatious spending attracted suspicion from authorities.

Revelations of a Dysfunctional Family

The police were building a case, saying that the brothers killed their parents to get their hands on the inheritance. While they would use their buying blitz against them in court, the police got their hands on some damning evidence. Racked by guilt, Erik confided in his longtime psychologist,  L. Jerome Oziel. He told Oziel about his crime and Lyle found out. So, he threatened to kill Oziel if he told the authorities.

The threat voided doctor-patient confidentiality to a certain extent. Lyle was arrested in the United States, and Erik turned himself in after returning from Israel, where he was at a tennis event. Though recorded tapes of Erik’s confession to Oziel could not be used in court to convict the brothers, the psychologist’s recorded notes were permitted as evidence. The trial that followed revealed that the Menendez family possibly had some dark secrets

The defense leveled accusations against José Menendez for being a tyrannical and abusive father. The brothers also claimed that they were sexually abused by José under Kitty’s knowledge. Family members corroborated the sexual abuse claims under oath. Yet, none of the accusations were formally substantiated.

The Menendez brothers were housed in L.A. County Jail during their two-year trial. When the trial was televised, it became a highly watched media event of the time. While the prosecution said the brothers killed their parents out of greed, the defense team tried to sell the abuse story. In 1996, Erik and Lyle Menendez were tried by separate juries and were sentenced to life in prison, without the possibility of parole.

Many are wondering if the Menendez brothers are still in jail. The answer to that is yes, they are, and they won’t be out for a very long time, if ever at all. They have tried to appeal their convictions several times in the 20 years they have spent in prison, but to no avail. Were the Menendez brothers abused? They still claim they were, as do some of their relatives, but no evidence to prove the claims have been found. Even the validity of L. Jerome Oziel’s statements is a matter of contention.

The Menendez brothers’ murders became the stuff of popular culture. Even the Jim Carrey-Ben Stiller starrer, The Cable Guy parodied the case when it released in 1996, around the time public interest in the trial was at its peak. The high-profile murder trial will be the subject of the upcoming Lifetime movie, Menendez: Blood Brothers.