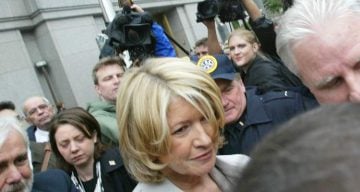 When it comes to cooking amazing holiday feasts, Martha Stewart is the first name you should think of. From cooking to DIY decorations, it seems like there is nothing she cannot do! But there was a time when not everything was perfect for the Queen of Home. Keep reading to know why Martha Steward went to jail.

Martha Stewart had a pretty clean record until the early ’00s. But the amazing chef, TV host, and DIY pro was arrested in 2003. Here are all the details you need to know about why, and how long Martha Stewart was in jail.

Why Did Martha Stewart Go to Jail?

Stewart’s father-in-law was a stockbroker and she tried her hand at the career in 1967. Her now ex-husband, Andrew Stewart opened a publishing house and operated several others. They later moved to Connecticut and restored an 1805 farmhouse. That sparked her interest in decorating, and she soon branched off to several related projects.

With all the money she made through her cookbooks, TV shows, and tutorials, Stewart saw enormous amounts of success. In December 2001, her Merrill Lynch broker, Peter Bacanovic, gave her insider information about her ImClone Systems shares, and he suggested she sell them to avoid a loss. The day after she sold her 3,928 shares, ImClone Systems’ value went down 16% and Stewart managed to avoid losing $45,673!

Once the news surfaced, Stewart was grilled on the topic during her scheduled TV cooking segments. Though she did not speak of the matter, the media continued to focus on the scandal for months.

When Was Martha Stewart Arrested?

In 2002, she resigned from the New York Stock Exchange’s board of directors after prosecutors struck a deal with Bacanovic’s assistant, Douglas Faneuil.

It was in 2004 that Stewart was found guilty of fraud, and indicted by the government on charges including obstruction of justice, securities fraud, and seven more. She was sentenced to five months in a federal correctional facility, and a two-year period of supervised release, with five months of electronic monitoring.

Stewart paid $30,000 in fines, gave up a total of over $58,000 of her profits (including interest from the losses she avoided), and paid a civil penalty that came to $137,019. She also agreed to a five-year ban from being CEO or CFO of any public company and was sent to Federal Prison Camp in Alderson, West Virginia.

However, she requested to be sent to either Connecticut or Florida (so her 90-year-old mother could visit), and the judge permitted she be granted her choices. But it was argued that due to ease of media access and the effects of Hurricane Ivan in Florida, neither were acceptable.

She claims it was “nasty,” with “lots and lots of disturbing things that go on in an incarceration.” But, the 76-year-old managed to rebuild her reputation. She currently enjoys a sinfully sweet $300.0 million net worth, and is still one of the most successful food and lifestyle businesswomen in the world!