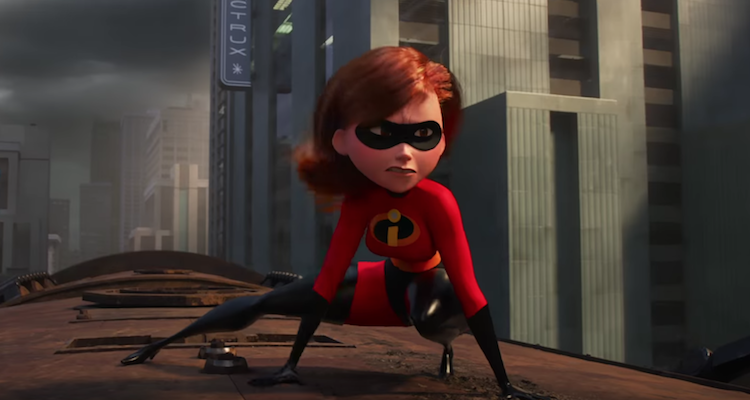 Suit up, because Disney and Pixar’s favorite superhero family is back! While fans of the hit family movie were more than happy to get a surprise Incredibles 2 trailer during the Winter Olympics, many wondered one thing; Why did Incredibles 2 take so long to come out? It’s a question fans have been asking for years since the first film’s 2004 release. Find out what the superheroes are up to now and why it was worth the wait!

The sequel many have been waiting for will hit theaters everywhere on June 15, 2018. Sure, it only took 14 years, but it was worth the wait! According to writer-director Brad Bird, “Incredibles 2 picks up, literally, where the first film left off, with Mr. Incredible and Elastigirl battling The Underminer, while Violet and Dash are stuck with babysitting Jack-Jack.”

“That’s all we’re saying for now,” Bird continued, “But rest assured, there are a lot more superheroics in store for our ‘family dynamic.’”

In Incredibles 2, the movie focuses on the Parr family matriarch, Helen (a.k.a Elastigirl/Mrs. Incredible) is in a “campaign to bring Supers back into the spotlight.” So, where does that leave Bob (Mr. Incredible) in all of this? He’s taking care of things at home, including his powerful children: Violet, Dash, and Jack-Jack, who’s already shown a variety of powers in the trailers.

Why Did It Take So Long to Make Incredibles 2?

As for the burning question as to why it took forever to make a sequel; there have been a few theories floating around for years.

One popular theory that stood out was that the studio wanted to wait 15 years (back when the film was set for 2019) to release a sequel, as a nod to the villain Syndrome, who’s been waiting 15 years to get revenge on Bob. Some thought it was clever, but really, ain’t nobody got time for that.

Instead, fans only had to wait 14 years—but there’s no real comment as to why the film took so long to make a follow up to the original! The most logical reason could be timing, story concept, and/or actor availability, but the real reason is unknown.

What’s also interesting is that in an era of #MeToo, Wonder Woman, and the Time’s Up movement, women are taking more control and spotlight. If anything, the coincidental timing is perfect for the Incredibles 2 plot, which puts Elastigirl in the spotlight, instead of her married alter-ego, Mrs. Incredible.

“Helen’s appetite for adventure comes to the fore,” Holly Hunter (Mrs. Incredible) told Entertainment Weekly. “Whereas before, she was driven to become Mrs. Incredible out of necessity, where she went into it to save her husband, I think this time she really meets her own ambition head-on. The ambition of being an adventure is something that we get to explore.”

She added, “Brad’s imagination veers off into intensely funny stuff, and I find that so fresh. And of course, that also includes the character development of Helen throughout this second movie. It just feels really rich, and like… this guy is a true feminist.”

Bob will no doubt have his hands full with three super-powered kids (because three ordinary kids aren’t hard enough, right?), but the trailers have already shown him in a more domestic position, while his wife rides off on motorcycles to save the day.

“It feels like women are reasserting their strength in different ways,” said Hunter. “I just think it’s beautiful that Incredibles 2 is allowing Mrs. Incredible to reveal all these other different colors of who she is.”