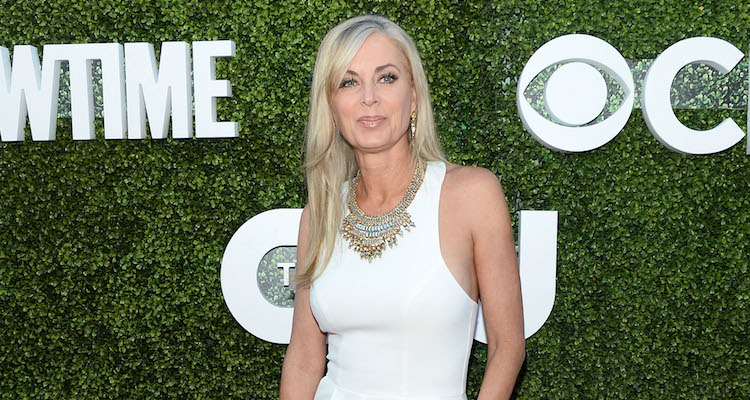 Eileen Davidson’s Real Housewives of Beverly Hills days ended this past summer. But unlike the rumors suggest, the Young and the Restless alum wasn’t let go.

“After a lot of careful thought, I’ve decided because of my crazy schedules at The Young and The Restless, as well as Days of Our Lives, it’s best for me and my family if I step away from being a Housewife for now,” she told E! News. “But you never know, I might be popping in from time to time just to see what the ladies are up to! Thanks for your love and support guys!!!”

Davidson joined the show in its fifth season (alongside actress Lisa Rinna), but Davidson’s time on the Bravo show wasn’t exactly all smooth sailing. Fans might remember her fights with fellow housewives Brandi Glanville, Kim Richards, and Kyle Richards, who also had conflicting feelings about her marriage to Vincent Van Patten. She butted heads with Dorit Kemsley in season 7 but got along with season 6 newcomer, Erika Girardi (who was on Dancing with the Stars and did a cameo on Days of Our Lives).

On Davidson’s exit, Girardi previously told Bravo, “I know that a lot of people are gonna miss Eileen. Eileen is one of the most understanding, kind, and giving human beings I’ve ever met — and what you see on TV is what you get. She’s lovely.”

We had a wonderful time celebrating and raising money for #peggyalbrechtfriendlyhouse yesterday! And look at my gorgeous nieces!! ❤️❤️❤️❤️

Where is Eileen Davidson Now?

With season 8 missing a housewife, fans are wondering what Davidson is doing now that she’s no longer on the hit Bravo show. Well, she’s doing exactly what she said she would: focusing on her acting career and family. She’s been busy juggling both soap operas and since she didn’t sever all ties with the other cast members, she still left the door open for a cameo. She has been active on Instagram and getting a lot of love and support from her fans.

One of the comments said: “I record and watch every day when I get home from work. My husband que’s it up for me!! Ashley my fav!! [sic]”

Another comment said: “I have been watching since grade 8 which was 40 years ago. I even sent away for your autograph in the 80’s and you obliged. Congrats to all that is a huge accomplishment!! Well done gang!!”

It’s not certain when or if the famous reality star/actress will return to the show in the future, but never say never! We know that she definitely won’t be able to make it before the year is out, due to her busy schedule but we know all of her fans are hoping for a surprise visit (or at least a recurring role) in the new year.

The Real Housewives of Beverly Hills airs Tuesdays at 9:00 p.m. EST, on Bravo.